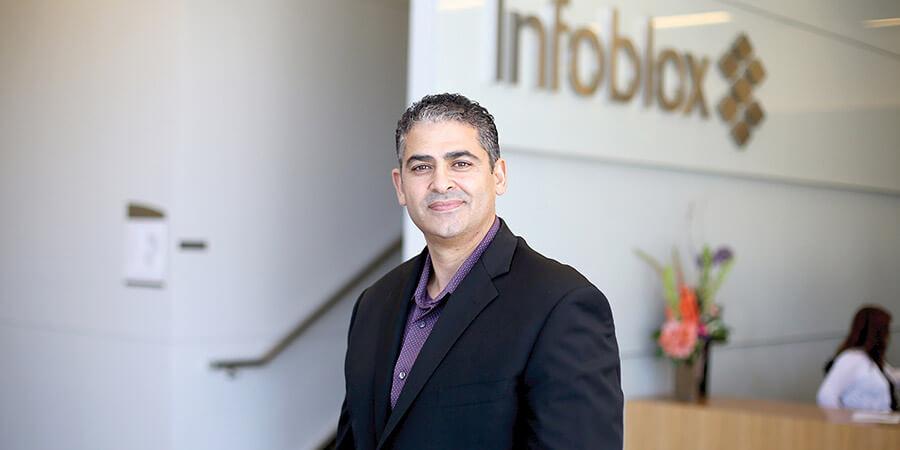 5G is the next evolution in the mobile space. But realizing 5G cannot be achieved with the current centralized network architecture, according to Cherif Sleiman, VP of Europe, Middle East and Africa at IT automation and security firm Infoblox. Mobile network architecture must be altered, he said, by pushing services and intelligence security to the edge of the network rather than the core.

The 5th Generation mobile network, scheduled for commercial release by 2020 in some countries, promises more bandwidth, more capacity and lower latency. With these features, 5G will enable users to send and receive information at much higher speeds, and experience content in a more audio-visual fashion.

But 5G cannot be realized with the current network architecture because it's too centralized, according to Cherif. With 5G promising unprecedented speeds, telecom network architecture
has to change. In an on-demand world, even minor delays in response times can lead to losses in productivity, customer satisfaction and sales.

"In a 5G network, what's going to happen is that the connectivity process of sending and receiving information via a device will no longer be centralized, meaning information won't need to be sent through the network core to get security treatment, DNS (domain name servers), etc., before it connects to the end-point," Cherif explained. This will all happen at the edge (next to the user).

Why does this need to happen? Because low latency is essential for seamless connectivity and it's defined by how fast information can be sent through the network core to the end-point, and then back to the user. DNS, for instance, constitutes 35 percent of latency in the user experience, according to Cherif, so it makes sense for it to be closer to the user at the edge rather than at the core.

However, DNS is constantly being attacked. According to the 2017 Global DNS Threat Survey Report from EfficientIP, 76 percent of all respondents said they were subject to at least one DNS attack in the last 12 months, with 28 percent suffering data theft. Therefore, if you move DNS to the edge, you need to move the security for it as well. That's why everything needs to move to the edge.

For 17 years, Infoblox has been the market leader for core network services, including DNS. To a large degree, networks are only as resilient as DNS, because this system plays such a central role in connecting user, devices and applications.

Embracing SDN & NFV
Intelligence services like DNS, application awareness and security all need to move away from the core of network to the edge for 5G to fully materialize, Cherif emphasized. But also just as important, he said, is for network architecture to embrace Network Functions Virtualization (NFV) and Software Defined Networking (SDN).

Telecom providers commonly have a handful of core network sites (like datacenters) and a few hundred access sites. Large telecom providers like Verizon have thousands of access sites located around the United States. If application awareness, security and DNS need to be moved to the edge for all operators' access sites, that would be a mammoth task.

That's why NFV and SDN are important, Cherif explained. "Those access sites have to turn to virtual functions and tie to orchestrators so that those access sites become virtual with a simple option, for example, to execute DNS traffic control or deploy malware mitigation," he said.
"SDN and NFV become essential to reducing the footprint of all this hardware and to create governance and simplicity of provisioning," Cherif added. "Therefore, security application awareness and DNS must become VNFs (Virtual Network Functions)."

It's also important that DNS-based malware mitigation moves to the edge so that requests are assessed in real-time, Cherif added.

For example, if a mobile device is trying to reach out to a dodgy website, this will be detected where the IEMI of the device is identified and flagged and notified.

As a global leader in DNS and intelligent systems, Infoblox has over 300 service provider customers around the world and understands their visions for the future.

As such, the company's product and innovation roadmaps are a reflection of that to enable its customers to accomplish all of the aforementioned.

"We've taken all of our security, all of our DNS, and all of the things that made us a leader, and brought it to the virtual world," said Cherif. "For example, today we have an NFV and SDN strategy where we take not only our security functions and turn them into VNFs, but integrate it with all the cloud providers out there. We also facilitate the ability for organizations to make a shift adopting VNFs from other companies, and integrating those."

Infoblox has even changed its entire licensing model to cater for the changing network architecture. When you're moving from a handful of sites versus hundreds of sites, you can't charge customers the same way, Cherif explained. So Infoblox moved to site-based and consumption-based licensing so it is more affordable for service providers and allows them to pay as they grow.

Telecom Italia is a success story of the model which was introduced last year by Infoblox and it is the model by which Infoblox is using to move forward with SDN and NFV. The operator announced plans this year to invest 11 billion euros ($11.8 billion) over the next three years to launch premium digital services and improve its network infrastructure across Italy.

Locating DNS, security and application awareness at the edge and utilizing SDN and NFV are critical changes that enable the transition to 5G.

As for 6G, it is not far to envisage the entire packet core network transition to a public cloud service where service providers can leverage public infrastructure completely to offer unlimited flexibility and roaming across the globe. The focus here would be on public interoperability.