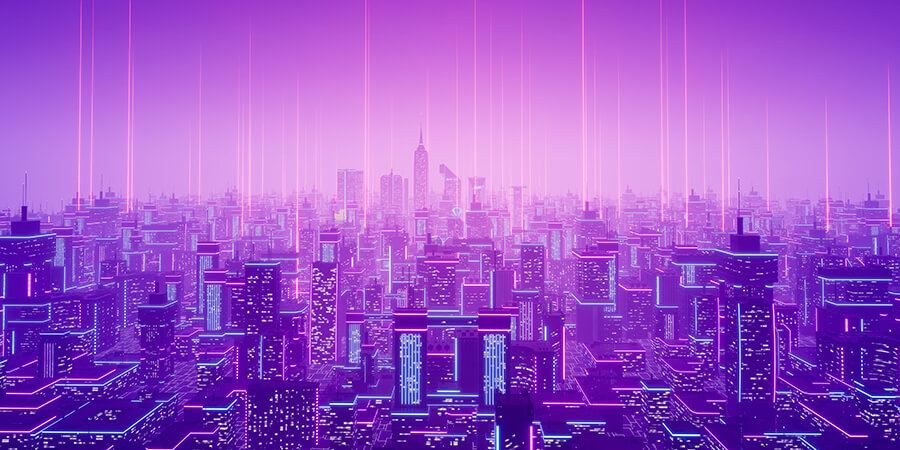 It seems like cities' continued growth and success are one of the great triumphs of modern civilization, with the future of design becoming virtual and driven by data.

Observing an evident shift in today’s world, people are moving from rural to urban centers at a rate of 1.3 million per week. Without a doubt, with the development of the 4IR, the path of urban development and transformation is becoming increasingly clear. This is where digital technology becomes the main driver while data is at the core of generation, collection, and analysis.

The use of digitalization and connectivity makes it possible to design cities based on virtual models, making them more liveable, smarter, and sustainable. Thanks to the spread of the Internet of Things (IoT), devices, and the different elements which make up a city can communicate with each other and improve their functions. Cities are now expected to be served by complex systems of interconnected assets and networks – a system of systems.

Talking about virtual and smart cities, the concept of a digital twin is now being explored more than before. In fact, ABI Research expects that by 2025, roughly 500 cities will be using digital twins. It is foreseen that there will be an integration of different specific digital twins of smart buildings, traffic infrastructure, power grids, and water management systems.

By definition, a digital twin city is a digital counterpart of a physical city through the construction of a virtual version. This innovative model aims to address various challenges through accurate mapping, analytical insight, virtual-real interaction, and intelligent intervention.

Sooner than later, key assets and ongoing projects like construction sites, roads, and bridges as well as dynamically-evolving situations like crowd control, traffic, housing, and crime would be managed through virtual cities. Still, in its nascent phase, regulations; standardization; and further collaboration are still needed to make cities available, both offline and online.

Cities in the Metaverse

Innovation and digital empowerment are crucial to transforming modern cities. With the emergence of the metaverse, which consists of 3D virtual worlds where people can interact, do business, and form social connections; it becomes the ideal place to build digital cities.

Betting big on digital properties, UAE-based Damac Group has announced its plans to invest $100 million to build digital cities in the metaverse – the first among the GCC to do so. Known as the tech hub of the Arab World, Dubai is also one of the pioneers in embracing the concept of the metaverse, virtual assets, cryptocurrencies, and blockchain, alongside other emerging technologies. Metaverse Dubai, the first global virtual platform based on a real-world map, has the goal of building a virtual megacity that reflects the real-world Dubai’s vast cultures and diversity.

It is necessary to establish a strong virtual community within a collaborative and user-driven space. In the Kingdom of Saudi Arabia, the future cognitive city of NEOM will enable a ground-breaking, mixed-reality model for urban living. “The whole purpose of NEOM is to be this collaborative, inclusive, human-centric place for people to interact,” stated Joseph Bradley, CEO of NEOM Tech and Digital Company. “It’s not really [about] megacities anymore—its meta cities.”

With a dynamic digital twin, immersive mixed reality, and digital assets marketplace, NEOM reckons its own cognitive metaverse to fuel diversification and unlock significant economic opportunities for itself, the Kingdom, and its global partners.

There is a great interest in new towns and cities springing up in cyberspace, constructed with digital bricks and mortar. The increasing development of 3D virtual city models and leading-edge computer software applications is providing innovative possibilities in the design and assessment of digital city squares.

Existing and emerging tools can simulate a number of performance aspects such as pedestrian movement, noise level, wind movement, and temperature that show scope for integrating virtual city models. Looking at the bigger picture, an urban infrastructure consists of sensory, connection, storage, computing, and converged aspects.

Realizing the potential that digital cities are the cities of the future, an urban infrastructure must be able to facilitate an intelligent, inclusive, efficient, entrepreneurial, sustainable, and safe environment.

Every digital city has a unique journey, and in the virtual world, the built environment must be self-sufficient as the participants are wholly dependent upon the tools supplied in it. We can bear in mind that a virtual city is endlessly mutable. Thus, its structure can grow and change at faster rates and its appearance may be highly subjective and tailored-specific.

As technology advances, the recreation of the experience and feeling of actually being there despite not being physically present is attainable. Simulation builds a bridge between concept and reality and urban planners utilize this to create something meaningful and accessible, needed to evaluate multiple visions and build consensus.

With a collaborative approach to urban transformation and the capability to integrate, understand, and harness complex data; the entire city ecosystem benefits. An integrated virtual environment provides a holistic and operational vision for mobility, energy and resource management, and citizen services, among other systems.

How to keep the virtual city model relevant and up-to-date? One instance is mapping and remapping the landscape continuously, relying on the collected and analyzed core datasets as well as available funding.

Integrating Tech for a Better Way of Life

By and large, ICT would revolutionize the way cities are managed – from the use of AI, IoT, big data, virtual reality, and other connectivity technologies. Together, with human actors, technology innovation could be done immensely online.

If we look at monitoring roadside infrastructure and traffic flows, this can be automatically and effectively managed virtually to make better informed and faster decisions. The use of supercomputing technologies, combined with engineering techniques and detailed traffic flows, is useful in generating a virtual city.

Predictive health and digital government are also important for virtual cities as it involve the residents and public sector concurrently. Delivering public services is deemed to be more streamlined when computer-generated.

Through virtual reality (VR), tenants or homeowners can take tours and envision a living space and its surroundings as though they were actually there. The opportunities in which VR can offer to the world of building technologies are limitless with elements such as light, heat, safety features, and security and access controls that could be simulated in a VR environment.

In this way, the assessment and identification of areas for improvement can be done quickly. As VR technology matures and becomes more accessible, urban living will be more transformative and challenging as it needs to be virtual and real at the same time.

Governments, enterprises, tech companies, and all other digital players should be more open to collaboration in business model innovation, and shaping a robust foundation of the digital metaverse. Truth be told, a digital twin or virtual city is the perfect combination of ICT technology and human civilization, but making it last for the generations to come would require strategic ventures to be successful.