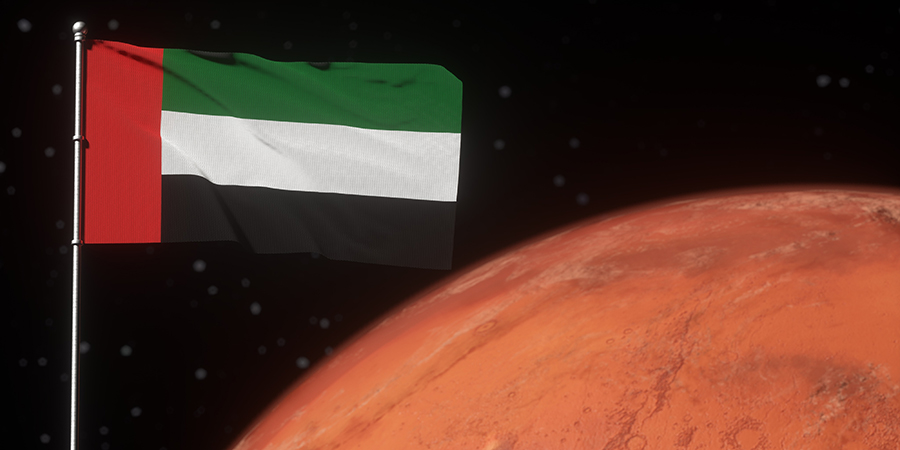 2023 is set to be a busy year for UAE's space exploration, from making history as the first Arab nation to land a rover on the Moon to sending an Emirati astronaut for a six-month trip to the International Space Station.

Indeed, space plays a critical role in sustainable development. His Highness Sheikh Mohamed bin Zayed Al Nahyan affirmed that the United Arab Emirates will continue to consolidate its leading position in the space sector, as it is one of the vital spheres for securing sustainable development. The sector creates significant economic and scientific opportunities.

The latest initiatives to establish international partnerships to conduct space missions that would increase scientific knowledge and drive innovation will enable a strong and sustainable national space sector that can help strengthen specialized local skillsets and push the country's ambitious leadership forward.

The Middle East is the known birthplace of astronomy and was the center of its development during the medieval period. In the 21st century, the region maintains its space aspirations, with the UAE at the forefront. Figures from 2019 show that the UAE’s investments in space exceeded Dh22 billion ($5.99 billion), with over 50 space-related establishments operating in the country and creating around 1,500 jobs.

In February 2021, in its first excursion into deep space, the UAE's nearly 7-year planetary mission became a reality when the Hope probe successfully entered orbit around Mars. This made the UAE the first Arab country, and the fifth globally, to ever reach the Red Planet.

In July 2022, the UAE established a Dh3 billion ($817 million) national investment and development fund for the space sector. The National Space Fund will support groundbreaking new programs launched to support international and Emirati companies cooperating in the latest engineering, science and research applications. As part of this fiscal initiative, the UAE announced plans to be the first Arab country to develop a constellation of advanced imaging satellites using Synthetic Aperture Radar (SAR) that will address the critical need for better environmental and land usage monitoring, data collection and analysis.

Salem Al Qubaisi, director general of the UAE Space Agency, said, "The National Space Fund will encourage global partnerships to establish themselves here in the Emirates, providing new and vital technology platforms and development to answer the needs of the UAE Space Programme and other global customers for vital innovation and technologies that answer the needs and possibilities of today’s world."

Despite several delays, before 2023 started, the UAE made further history by successfully launching the Arab world's first lunar rover, Rashid. The low-energy route, which started in early December 2022, will comprise a 385,000 km odyssey that will make the UAE the first country in the Arab world and the fourth worldwide to land on the Moon. The rover is expected to touch down about five months after its launch, around April 2023.

His Highness Sheikh Mohammed bin Rashid Al Maktoum, vice president and prime minister of the UAE and Ruler of Dubai, shared an aspirational message regarding this: "Explorer Rashid is part of an ambitious space program for the UAE.. that started with Mars.. passing through the Moon.. to Venus.. our goal is to transfer knowledge, develop our capabilities and add a scientific footprint in human history."

Following up on its successful launch of the Hope spacecraft into Martian orbit and manifesting the UAE’s Projects of the 50, the GCC country also plans to send an unmanned spaceship to the Moon in 2024. There have also been suggestions of branching into space tourism, exploring Venus by 2028 and landing on an asteroid, making it the fourth country to do so if successful.

Over the last decade, the UAE space sector has accelerated its activity, driven by its technological advancements and an increased number of stakeholders that fuel such rapid development.

International and cross-sector collaboration is thriving, and for the high-growth sector to continuously succeed, there is a real need to effectively collaborate, organize the ecosystem and integrate the activities with existing and upcoming national space programs.

“As we implement our long-term ambitions in space, the first steps of which are clearly outlined in our National Space Strategy 2030, we cannot over-emphasize the importance of international collaboration to our plans. Our space program has been built on such collaboration, with partners in Europe, South Korea, the US, Japan and elsewhere,” Sarah bint Yousif Al Amiri, minister of state for public education and advanced technology and chair of the UAE Space Agency, noted.

One of the latest collaborations, between the UAE's Mohammed Bin Rashid Space Centre (MBRSC) and the China National Space Agency (CNSA), was announced in September 2022. The agreement marks the first joint space project between the UAE and China as they work together on future lunar efforts.

Tapping China for future Moon explorations is thought to be beneficial, given the nation's impressive record of successfully launching three lunar surface missions.

In a similarly advantageous agreement, the Philippine Space Agency (PhilSA) also inked a cooperation memorandum with the UAE Space Agency to promote joint space research and development, capacity-building, people-to-people exchange and space industry building. This pioneering agreement executed in December 2022 will help promote collaboration in applications that include not only space exploration but also research, access to data and its utilization for challenges such as climate change, disaster management, emergency response and agriculture.

The United Arab Emirates has made momentous strides in its space program, positioning itself as a hub for advanced technology, diversifying the economy away from oil and rekindling a curiosity in space culture in the new generation.

Nearing the end of December 2022, the UAE Space Agency launched a six-month training program for graduate Emiratis, aimed at providing young nationals with the space-related skills and expertise necessary to support national space programs. The "Space Workshops" is an intensive, experiential space systems development accelerator that bridges academic knowledge with the realities of space development projects.

Ibrahim Al Qasim, deputy director general of UAE Space Agency, said, “Today, the space sector has become an integral pillar of sustainable economic growth for the UAE and other countries globally. With a regionally unique regulatory framework, the UAE’s space program is perfectly positioned to become a key sector in our future vision for the next 50 years.”

The upcoming geospatial analytics platform of the Space Data Center is set to contribute to meeting the main requirements of the transformation projects announced by the UAE government. Through the platform — expected to be fully operational by Q4 2023 — the UAE Space Agency aims to facilitate access to satellite data for scientists, researchers, government and private institutions, startups and community members to develop solutions in the form of space data apps and value-added services (VAS).

Addressing the procedures and regulations of non-geostationary satellite systems, the Telecommunications and Digital Government Regulatory Authority (TDRA), in cooperation with the ITU, held a three-day workshop targeting satellite operators, academia and other relevant organizations in the UAE that already own or have initiated space and satellite launch programs. These projects would require particular knowledge of ITU procedures and regulations related to satellite networks and systems.

Presented by ITU experts, the workshop strengthened participants’ knowledge of the regulatory procedures of satellite systems and network filings to better develop their current and future space projects — endeavors that would contribute to capacity building and enhance the UAE’s position in the space sector.

The EASID initiative focuses both on the growth of existing commercial space organizations as well as the establishment of an environment for new entrants like space startups. In addition, the EATS initiative includes outreach and training designed to support talent development for the space industry in the UAE, particularly with regard to cloud computing and big data.

The open-data program will encourage collaboration among the UAE space and research communities through the sharing of data sets on AWS related to space-data-driven initiatives. These include space surveillance and space situational awareness programs.

The agreement between the hyperscaler and the space agency builds on AWS’s ongoing support of regional space endeavors such as Hope Probe, which utilizes AWS to analyze and share scientific data about the Martian atmosphere.