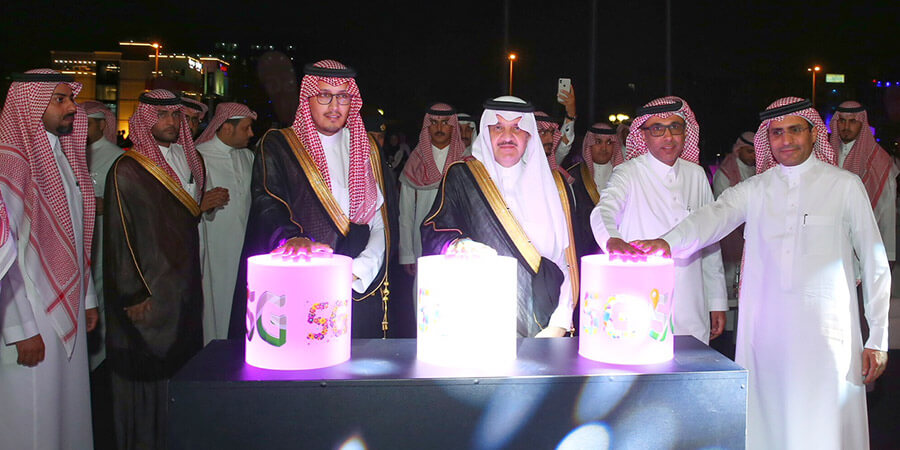 HRH Prince Saud bin Naif, governor of eastern region, launched the first live 5G network of STC, for the first time in MENA launched - this also represented the initial phase for operating the service once 5G is available in the global markets.

On this occasion, Eng. Abdullah Alkanhal, undersecretary of the Ministry of CIT stated that the launch of 5G reflects the improvement of CIT sector in the Kingdom, in line with the country’s digitization plans, NTP 2020, and kingdom's vision 2030.

The ministry with the guidance of Abdullah Alsawaha, Minister of CIT, exerts great efforts to improve this vital sector for the prosperity and comfort of the people of Saudi".

He pointed out that the launch of the first network in the region is an affirmation of the Kingdom's move towards digitization by providing the latest technologies to ensure advanced infrastructure that contributes to the successful vision of the Kingdom.

Eng. Nasser Al Nasser, STC Group CEO, expressed his proudness of this initial launching that confirms STC's pioneering position in providing innovative services for the customers around the Kingdom and the region.

Al Nasser said, "We have confidence, knowledge and innovation, which will enable us to lead the 5G era. We launched the 5G service by operating a number of towers, initially, in the eastern region. The company will continue working on building the network construction gradually in the cities of the Kingdom, until the devices are available during of 2019."

The launching ceremony was accompanied by a pavilion to explain about 5G, in King Faisal Sea Park in Khobar; the visitors were able to review the virtual neighbourhood services, 5G car, and K4 Videos

In January 2017, STC succeeded in advanced technical experiments and trials on 5G technologies as part of the company's strategy of leading technological development and leading modern and advanced services.

The widespread use of 5G will facilitate the dissemination of information, promote prosperity of the common digital economy and accelerate changes in current productivity methods and lifestyles.

The 5G network is expected to make a quantum leap in future services and applications, and will contribute in increasing the speed and performance of wireless networks. The 5G will not only affect the efficiency of communication between people and their phones or computers only, it will affect more sophisticated uses such as IOT, AI and robots