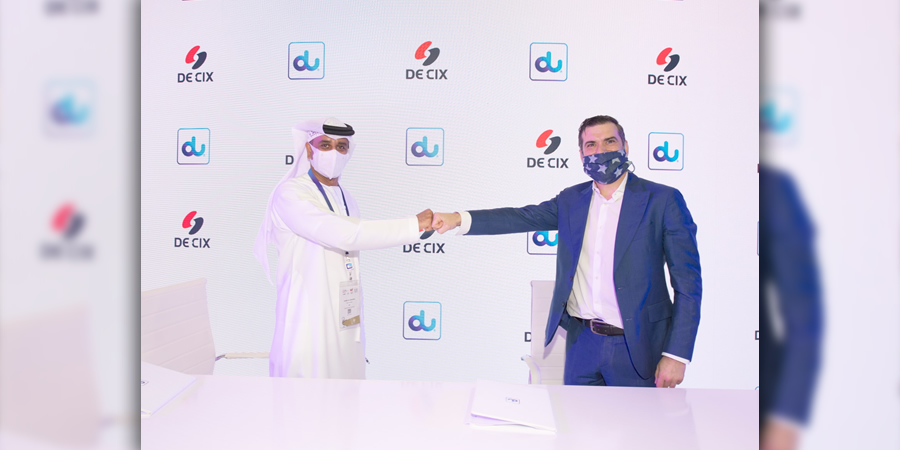 du has announced that an extension agreement has been finalized with UAE-IX powered by DE-CIX, the leading carrier and data centre neutral Internet Exchange operator in the GCC region, to create the first nationwide and entirely datacenter-neutral interconnection platform in the MENA region.

At present, the UAE-IX is physically present only in Dubai’s IMPZ datamena facility. However, the award-winning Apollon platform of UAE-IX powered by CE-CIX will now be extended to further sites and data centers in the UAE, including Khazna Dubai, Khazna Abu Dhabi and a new point of presence at Fujairah. Executives from du and DE-CIX, the world’s leading Internet Exchange (IX) operator, signed the contract during this week’s GITEX Technology Week in Dubai. The rollout is aimed to be completed and ready for service in Q2 2021.

The UAE-IX is built on a fully redundant switching platform and is the first carrier-neutral Internet Exchange for the Middle East that interconnects global networks and, above all, network operators and content providers in the GCC region.

In 2019, the UAE-IX deployed the DE-CIX’s Apollon Advance platform to enable hyper-scalability and Cloud Exchange features alongside its global peering services. Customers are connected directly through a Virtual Local Area Network (VLAN) and via their access at the UAE-IX reaching 50+ cloud providers, from niches to hybrid solutions. The UAE-IX is also connected to DE-CIX Marseille, enabling remote peering with the world’s largest IX DE-CIX Frankfurt. Looking ahead, the operator will now open up the world’s largest neutral interconnection ecosystem to customers in the GCC region.

Fahad Al Hassawi, Acting CEO, EITC, said: “Everybody associated with our brand is delighted that we have finalized this agreement that will see us create the first nationwide and entirely datacenter-neutral interconnection platform. In the new digital landscape, interconnectedness is essential. Upon completion of this pending expansion, the UAE-IX will become accessible from all relevant sea cables on the traffic highways between Middle East, Asia, Europe and Africa – opening the region’s largest cloud connectivity market place that will be accessible for any type of industry segments, including Finance, Education, Healthcare, Logistics and many others. GITEX 2020 marks the first step of this exciting project and we are looking forward the coming period with great anticipation having supported the operator with our infrastructure since its establishment in 2012.”

Ivo Ivanov, CEO, DE-CIX International, said: “The global pandemic has told us that data needs to be as close to the customer and the user as possible to increase quality, security and resilience. In addition, latency requirements get lower and lower, so it becomes even more important to also bring interconnection services as close to people and businesses as possible – everywhere on the planet. DE-CIX, the operator of the world’s leading interconnection ecosystem, brings low-latency, high-performance interconnection services to 25 metro regions around the world, connecting over 2100 of the world’s largest networks, available through 500+ data centers in more than 100 countries. With the expansion to more locations in the UAE, DE-CIX is keeping its own promise in offering easy interconnection to our customers anywhere needed – especially in the UAE.”