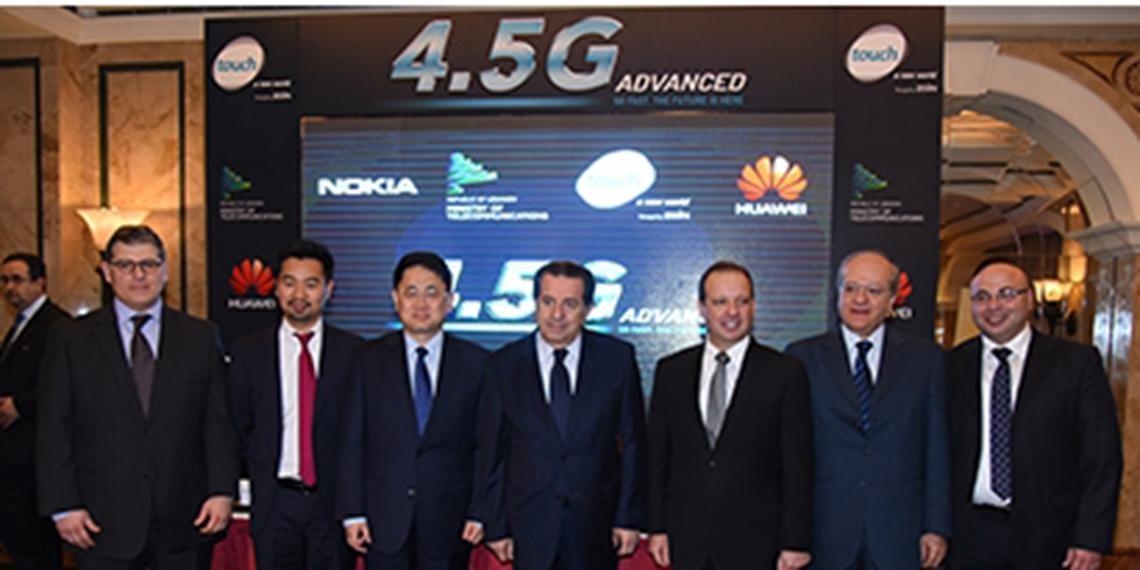 touch, managed by Zain Group, and under the patronage of His Excellency Minister of Telecommunications, Boutros Harb, hosted a ceremony for the official signing of touch 4.5G Advanced network deployment all over Lebanon, in partnership with Huawei and Nokia. The event took place at the Phoenicia Hotel Beirut, and was attended by the Chinese Ambassador in Lebanon Jiangjiang, influential figures in the telecommunications sector as well as renowned media personnel.

The event celebrated the beginning of a new milestone in the Lebanese Telecommunications sector. Partnering with Nokia and Huawei, touch will be the first to bring the 4.5G Advanced to Lebanon in September 2016, installing 1415 sites to cover 99.8% of the country. Besides the standard dual carrier speed of 300mbits/s nationwide, touch will enable 3 carrier aggregation and 4x4 MIMO antenna technology in hotspots urban areas, which will deliver speed capacity between 450 mbits/s and 600 mbits/s. The deployment process will be fast tracked, focusing primarily on coverage and capacity, ensuring that even the most remote villages in the country can enjoy LTE.

Minister of Telecommunications Boutros Harb began his speech by talking about the importance and the size of the concerned ceremony, which was signed between Nokia, Huawei and touch, a few days after an agreement was signed between Nokia and Ericsson. He praised "the prevailing spirit of cooperation and the exciting challenge it brings, taking Lebanon exactly where it is supposed to be, to the forefront of telecommunications technology and services. Lebanon, which was leading the race in the field of telecommunications in the Arab world, both in terms of mobile and internet, was unfortunately left lagging behind. Today, we are making every effort to make sure that Lebanon takes the lead again, based on our belief that Lebanon and the Lebanese people deserve far more than what they have settled for."

Harb said: "As a first step, by the end of September we will have 4.5G Advanced across Lebanon. This project puts Lebanon in the lead, and as the CEO of touch said, will be available for 99.8% of the Lebanese people, which is truly a great thing. I would also like to emphasize, in the presence of "Nokia and Huawei," that the work must be completed by September. I call for touch to accelerate its efforts because there are several tenders that must be completed in parallel to this project, and that the work must continue with the same level of transparency, respect and quality that we have always adopted."

He stated: "By the end of 2015, touch internet traffic, generated from 1.6 million data customers, tripled from 15TB a day to 45TB over the previous year. Mobile internet has become the primary source of connectivity, desktop internet taking the back seat. Mobile data communications is at the core of our lives today and shaping a new world."

Touch CEO's added: "We are also announcing today technology co-operation agreements with both Nokia and Huawei to ensure the touch network is 5G enabled and able to handle commercial traffic, when global standards are finalized most likely by end of 2018. Such partnerships with the world's leading network technology companies and Zain Group will allow us to deliver the Ministry's Vision 2020 faster than anticipated."

Huawei chief executive officer of the Levant Region, Li Shi said: "Huawei as a global leading technology vendor with its global, regional and local capabilities, focusing on the rich user experience has been always contributing and investing to open ROADS to a better connected world. So, Huawei through its state-of-art and advanced 4G technologies, and adopting customer-centric philosophy, is committed to add more in the development of the ICT Market of Lebanon through this historical partnership with Touch, by focusing on providing the richest user experience and consider the user experience as a "service."

Ahmad Othman, head of Business Zain Group, Nokia, stated: "Increasing usage of smart devices to access voice, video and other data-intensive applications on the go by customers of Touch in Lebanon demands a superior network with high speeds and optimal coverage. Due to Nokia's long-term partnership with Touch, we understand our customer's exact requirements and will build an ultra-fast LTE-A network with our Single RAN Advanced radio platform, carrier aggregation technology, network management system and professional services. This will ensure a world-class mobile broadband experience for Touch customers."