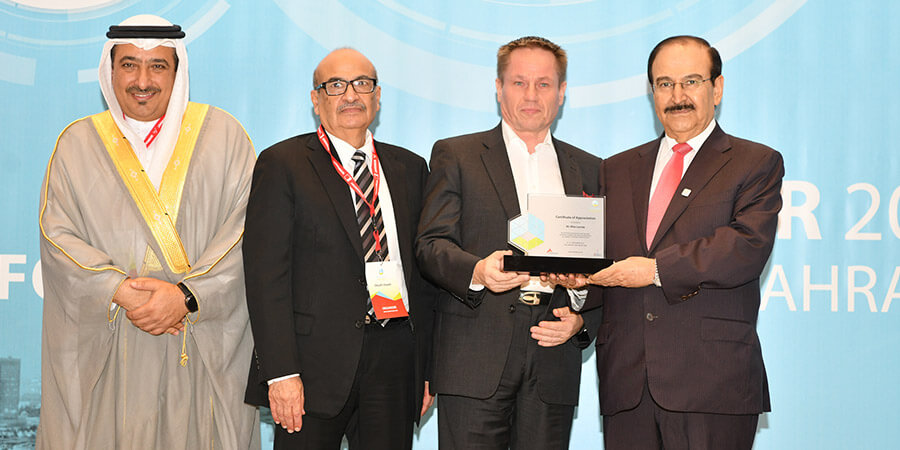 Mika Lauhde, Vice-President of Cyber Security and Privacy, Global Public Affairs at Huawei Technologies, shared his vision of a new frontier for cybersecurity regulations at a keynote in Manama, Bahrain.

His speech called for increased international cooperation between policy-makers, governments, and private organizations to build an open and collaborative cyberspace capable of fighting new threats. The talk was held on the sidelines of SmartSec, Bahrain's leading cyber security and blockchain conference, on September 4th, 2018.

Lauhde began by noting that as our society becomes increasingly dependent on the internet, cyber security has become an issue of common concern. Emerging technologies, while creating fresh opportunities for economic development, are also leading to new cybersecurity vulnerabilities.

This is a trend affecting the entire globe: from hackers stealing $81 million from Bangladesh's national bank in a matter of hours, to the Equifax Data Breach that left the sensitive information of 143 million consumers exposed in the United States.

Lauhde identified two challenges to effectively combating these threats: the first is a global trend for each country to generate their own set of policies, resulting in a lack of coherence in international laws and practices, an issue further compounded by conflicting national interests hindering cooperation.

The second is a lack of understanding about technologies like Artificial Intelligent (AI), Internet of Things (IoT), and blockchain making it difficult for regulators to formulate cogent and effective laws that protect users while continuing to foster the growth of new technologies.

Mika Lauhde then shared a new vision for cyber regulations: to build a trustworthy, transparent, collaborative and open cyberspace, and thereby increase cybersecurity globally. He asked for governments, industries, and users to reach out, work together, and through greater international cooperation enable organizations worldwide to more effectively combat cybersecurity threats.

This issue is particularly relevant to the Middle East today, as the region prepares for the rollout of 5G networks. 5G will bring with it a dramatic expansion of a range of emerging technologies, from IoT to autonomous vehicles to AR/VR. As such, it is vital for authorities to set the regulatory scene right from the start.

The impact of decisions made today will be felt in the coming years and even decades, according to Lauhde. By increasing collaboration between governments and private organizations and encouraging public-private partnerships, the region can lay down strong foundations to build out 5G while enhancing the security of all.

"Developing effective strategies to cope with cybersecurity threats is a core priority for countries in the Middle East, and globally, as digitalization continues to transform every facet of society", said Mika Lauhde, Vice-President of Cyber Security and Privacy, Global Public Affairs at Huawei Technologies. "Huawei has always been a collaborative partner with private and public organizations in the Middle East, and we are committed to supporting the region as it pursues its vision of diversified, knowledge-based economies through digital transformation. By increasing international collaboration and fostering trust and transparency globally, we believe we can effectively combat cyber threats and lay down the groundwork for a fully-connected, intelligent - and secure - world."

SmartSec, a two-day conference on the topics of cybersecurity and blockchain, is held under the patronage of H.E. Mr. AbdulHussain bin Ali Mirza, the Minister of Electricity and Water Authority. The event aims to bring leading international professionals in the field of Cybersecurity and Blockchain and provide attendees with a unique opportunity to get acquainted with the latest trends, innovation, and solutions in the industry.