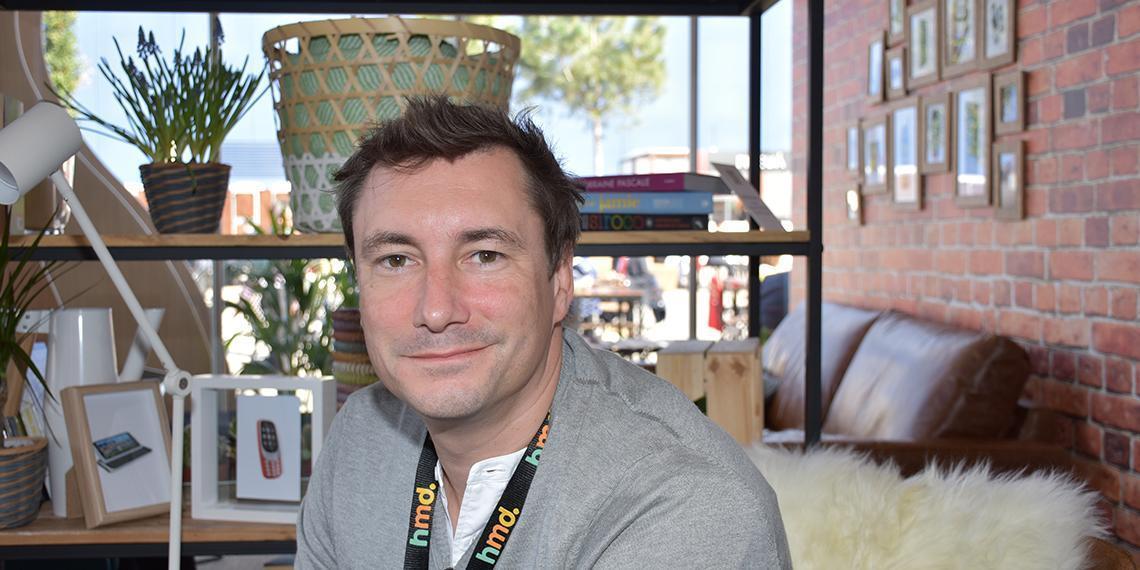 At Mobile World Congress this year, HMD Global, the license-holder of the iconic Nokia mobile brand, stole the show by unveiling three new Nokia smartphones and a reimagined version of the classic Nokia 3310. The Finnish startup has revamped the Nokia brand's reputation for reliability, says HMD Global's Director of Global Marketing Strategy and Head of Marketing for MENA and APAC, Patrick Mercanton, by defining "quality" as its culture.

HMD Global has an advantage over other tech startups attempting to penetrate the saturated smartphone market: it sells products under the world-famous brand Nokia, which was once the world's top mobile phone maker. The Nokia brand has now been relaunched by HMD Global, which aims to take on the likes of Apple and Samsung to bring the Nokia brand back among the world's top device players.

The Nokia mobile brand was sold to Microsoft in April 2014 in a $7.2 billion deal. Nokia was the leading mobile phone maker in the early 00's, but was slow to adapt to the new generation of smartphones after the first iPhone was launched in 2007. Android phones eventually dominated the global market, and Nokia's position slipped after the decision to use Windows software.

Microsoft eventually changed its strategy after its Nokia Lumia Windows phones didn't quite take off. In May 2016, Microsoft sold its mobile phone assets to a subsidiary of Taiwanese firm Foxconn Technology and the newly-established firm HMD Global for $350 million. The deal opened up the opportunity for Nokia to be reimagined as a modern mobile brand.

HMD Global was created specifically for the task of designing, developing and commercializing Nokia-branded feature phones and smartphones, Patrick Mercanton explained to Telecom Review at HMD Global's Mobile World Congress booth. He said the Nokia 3, Nokia 5 and Nokia 6 smartphones should be available in the Middle East during the second quarter of this year, as well as the modernized 3310.

It's important to note that Nokia does not manufacture the new devices, but instead licenses its intellectual property to HMD Global. Nokia receives royalty payments from HMD for the sale of Nokia-branded mobile products. Ex-Nokia executives and other experts from the industry helped to establish HMD Global which was officially launched on 1 December 2016. But HMD Global operates under strict Nokia quality controls.

"We've been driving a portfolio of products for Mobile World Congress. The Nokia 6, our first smartphone product, actually came out first in China and it sold like hotcakes. Within the first 23 seconds the first batch was gone, so it's clearly doing well," said Patrick.

"To tell you the truth, the world doesn't need just another smartphone brand. There are many smartphone brands around, most of them coming from China, with lots of specs and lots of capabilities, and lower price points. We understood that we don't need a smartphone with more specs to fuel the already saturated specs race; we need a more human smartphone with soul," he added.

"The industry has moved to a place where people are getting bored with what's on offer in this space which has become too focused on specs. Consumers, when you ask them, are saying their concerns are not about megapixels or extra features in general. What we've noticed is that the main consumer pain points on smartphones revolve around display fragility, battery efficiency and slowdown in processing. All these things are linked to quality and reliability."

HMD Global caught on to this gap in the market - where reliability, durability and authenticity were often missing from the handset market - characteristics that resonate with the Nokia brand.

"Some people say innovation is their culture. For us, quality is our culture," said Patrick. "We felt that it's the right time to drive a great portfolio of quality products from the Nokia brand at reasonable prices. Purposefully, we've gone to the market without a flagship. Instead, we've taken flagship quality and made it affordable. We have not forgotten that Nokia is a people's brand, not an elitist brand, and we believe everyone has the right to Nokia level quality."

The Nokia 6, for instance, is carved out of a solid block of aluminum which makes it durable and reliable - a process that takes almost an hour per device. The Nokia 5 is also carved out of aluminum, and the Nokia 3, which sells for just $140, has an aluminum rim carved in the same way. As for the re-launched Nokia 3310, it has 22 hours of talk time and 25 days of standby time, which makes it a lot more reliable than other devices on the market today.

"Getting that quality and reliability just right has been a priority in terms of our smartphone development," said Patrick. "If you look around Mobile World Congress you see tons of innovation from other brands, but we feel that we're seeing much of the same thing being produced. There's novelty, clearly, but I'm not sure that the novelty is cutting through so much to consumers and meeting their needs. Tech leaders, of course, are interested, but we're talking about the majority of people here."

There is a place for flagship tech-leadership products, but that's not Nokia's space at the moment, Patrick explained. HMD Global may move into that space when they decide to experiment and try new concepts, but right now it's "all about bringing fantastic value and great quality to the majority of consumers. We haven't forgotten that Nokia became famous when it democratized mobile phones, and HMD Global intends to democratize quality smartphones."

Tradeshow conventions today are all about flagships, where vendors hope that showcasing their flagship will have a "trickle-down effect on the rest of the portfolio," said Patrick. HMD Global felt there's a lack of humanness to it all, and decided to bring people back into the equation and make sure that, in the end, it's "not technology for technology's sake, but technology for people."

HMD Global Nokia products are designed to have everything a person needs and nothing that they don't. It's important for HMD Global to be able to make those tradeoffs. For example, Qualcomm's new Quick Charge 4 chipset is "great for phones in terms of power efficiency because of the way it automatically switches things on and off so that the device isn't running everything at the same time," Patrick said.

He further explained how HMD Global was careful not to "mess about" with the Android software in their phones. "If you want to make Android your own and customize it by putting skins on it or adding preloaded apps, it ends up being cluttered, slower and it doesn't get the automatic updates," he said. "Android is updating their software all the time making it more power efficient, secure, etc. You add customizations to Android and you no longer get those updates."

Looking ahead, if HMD Global decides to change things up and release a flagship device, it will "be on our own terms," said Patrick, adding that Nokia phones will always be linked to Nokia's heritage, like the nostalgic re-launch of the 3310. HMD Global has been asked if they're going to reinvent other iconic Nokia models, and that's certainly a possibility, according to Patrick, who said "the Nokia fans will decide."

"If we stole the show at MWC this year, it's because we took a different angle. Other brands are too focused on one individual feature that only exists in one product - not in the entire range. We came out with three Android smartphones that are affordably priced with a common feature set across the range, such as an aluminum body and the latest Android Nougat, launched under an iconic brand."

Drawing on the hallmarks of the Nokia phone heritage of quality, simplicity and reliability, the new range of Nokia devices by HMD Global are designed for a new generation of fans. With a commitment to deliver pure Android, users can expect a simple, clean, secure and clutter free experience.