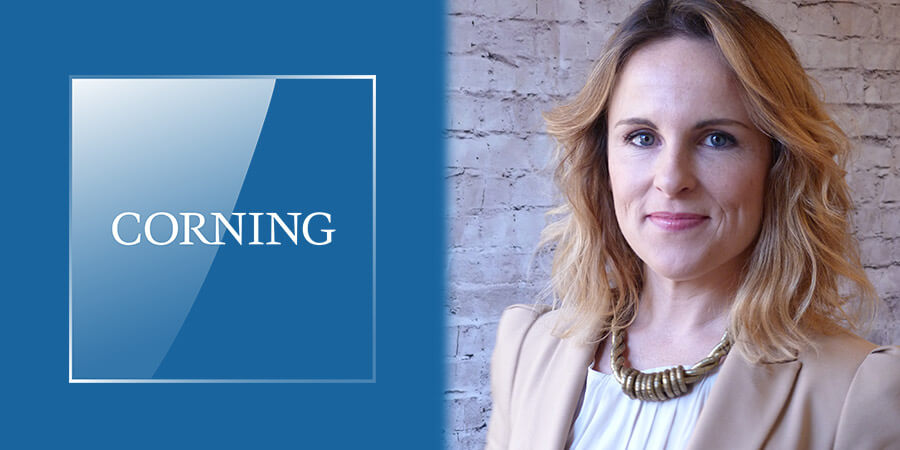 Can you give us an overview of Corning's main products driving innovation in the market?
With over 15 years of experience in fibre to the home (FTTH) deployments and more than 35 million homes passed - and counting - Corning has an extensive portfolio of optical innovations, from innovative optical fibres to high density systems in data centres. It all started in 1970 when Corning invented the first low-loss optical fibre. Since then, Corning has developed and manufactured more than 30 new types of fibre for use in submarine, long haul, fibre-to-the-home, local area networks, consumer applications, and in-building networks.

One remarkable innovation, if I had to choose, would be our Corning® Ultra® fibre, the first combining both low attenuation and bend tolerance. But we also developed the first loose tube fibre optic cable design that has evolved to our high-fibre-count cable offering including our MiniXtend® HD cable, up to 20 percent smaller than a standard micro cable. In 2004, right in the infancy of FTTH, Corning created the hardened OptiTap® connector, pioneering the first Plug & Play solution for FTTH deployments that became an industry standard. There are many different products in this category, one of which is our FlexNAP™ system, which enables one of the most cost-effective methods of deploying optical fibre at speeds significantly faster than traditional field installations.

But not only have we been active in the spread of FTTH, Corning was also the first  to introduce a high-density, modular data centre solution that, over time, evolved into our EDGE™ solutions for data centres and the Centrix™ system for the central office and headend, both featuring industry-leading density with a small footprint.

Mobile networks need to evolve to keep up with 5G requirements. In your opinion, what are the main pillars of such an evolution?
Obviously, the scope of the evolution that mobile networks will have to undergo in order to support 5G technologies is very broad and will affect many layers of the network. However, at the infrastructure level, there are two main changes that will profoundly impact radio access networks (RAN): the densification of the RAN and the migration to centralized RAN architectures.

Densification is the addition of more cell sites to increase network capacity and meet the fibre-like speeds promised by 5G. It will mostly happen at the small cells level, because when these cells whisper in the same frequencies as their big brothers - the macro cells nearby - they allow mobile operators to reutilize frequencies, increasing capacity without having to buy new, expensive spectrum. Also, increased density will allow the mass connectivity of low-bandwidth devices, also known as the internet of things (IoT).

The RAN will also have to evolve from traditional distributed architectures to centralized ones. In a distributed configuration, the "brains" of the cells, the baseband units (BBU) - those in charge of communicating with the core of the network and cells nearby - are collocated at the cell site with their remote radio heads (RRHs), which generate the radio signals transmitted over the airwaves via the antennas.

In a centralized RAN architecture, instead, all BBUs from the same area have been relocated from their cell sites to the same location further away from the cells. This configuration allows dynamically allocating BBU resources to the RRHs, load balancing the mobile traffic, and most importantly, tightening the coordination between cells, which is essential to implement critical 5G features such as super low latency. Other added benefits to aggregating BBUs in a few central locations are the 40 to 50 percent energy savings on support equipment such as air conditioning, the simplification of management and operations, and the easier installation and maintenance at the cell sites due to the lighter and simpler equipment.

First of all, mobile networks need optical fibre. Initially, the focus for mobile operators had been on delivering "voice everywhere," but the introduction of smartphones in 2007 shifted the focus to also delivering competitive data rates to mobile subscribers. This started to put pressure on mobile networks to carry more and more data. Although preferred, fibre was still optional at this point, but the advent of 5G and its promise of high speeds and very low latency requires optical fibre, as it is the only transmission medium capable of meeting both needs.

And finally, the integration of mobile and fixed operators has consolidated as a global trend. The result is that, for the first time, very large integrated operators own both fixed and mobile networks, both of which require optical fibre. Considering that the costs of deploying fibre are known to be high, especially in access networks where infrastructure represents more than 50 percent of long-term operators' investments, it no longer makes sense to continue deploying fixed and mobile networks in silos. A sustainable network evolution strategy for access networks is required for the next decade, and this is precisely what network convergence represents.

How can fibre help in the path to 5G deployment?
When we think of mobile networks, we imagine a wireless infrastructure, but just like we wirelessly connect to our router over Wi-Fi in our fixed networks, mobile networks are only wireless from the cell site to our phones. Behind those cell sites, it is a wireline infrastructure made of cables and nodes that is increasingly in need of optical fibre.

Optical fibre is also the enabler at the infrastructure level of fixed mobile converged networks. With it, we can connect all of the different services, like fronthaul, backhaul, FTTH, FTTB, dark fibre, and more, in a given area using the same optical fibre cable infrastructure and even the same fibre strand (if we multiplex all of these services in one fibre). Optical fibre launched the age of optical communications and ultimately transformed the way we create, share, and consume information and is today once again of paramount importance as an enabler of 5G technology and its incredible applications.

The Communication Markets Division mainly produces high-bandwidth optical connectors, assemblies, hardware, and accessories for carrier networks, enterprise LANs, and data centers. This acquisition is a strategic move by Corning to broaden our portfolio, expand our market reach into key growth areas around the world, and further our position as the only end-to-end manufacturer and supplier of optical solutions.