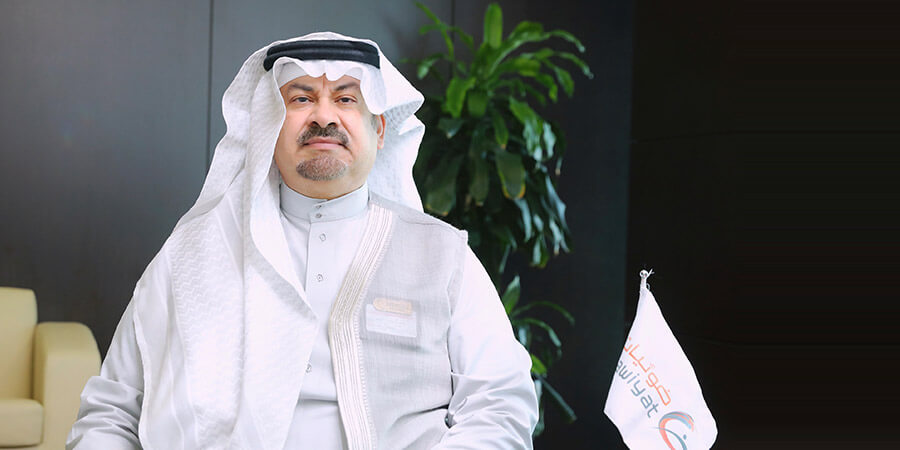 Saudi telecommunications firm Dawiyat Company has expressed its desire to become a worldwide leading wholesale provider in an effort to meet its Vision 2030 objectives.

Telecom Review managed to secure an exclusive interview with the CEO of Dawiyat Company, Dr. Ahmed A. Sindi who outlined in detail the company's ambitious strategy and vision for the future. The Saudi company is wholly-owned by SEC, and has enjoyed phenomenal success since it was founded in 2009.

The primary objective of the company following its inception was to optimize investment in the company's resources in the field of the company-owned fiber optic systems, which covers more than 71,000km across the Kingdom. Its overall mission was to provide telecom services to enhance the quality and speed of internet and broadband services in KSA - which is in line with the goals and strategic plans outlined in Kingdom Vision 2030 and the National transformation Program 2020.

Under the dynamic leadership of CEO Dr. Ahmed A. Sindi, Dawiyat has firmly established itself as one of the major telecommunication leaders in Saudi Arabia.

Dr. Sindi has enjoyed a decorated and distinguished career, with over 25 years of experience in general management positions in areas such as ICT, Construction and Manufacturing.

Dr. Sindi has a proven track record of growing enterprises, from startups to large corporations - and he has showcased that he possesses the ability, capacity and expertise to transform businesses and make them into commercially viable successes.

This has been evidenced further by the success he has overseen during his tenure as CEO of Dawiyat Company. In addition to his role at Dawiyat, Dr. Sindi has been a hugely influential figure and voice in the future development of the ICT sector in Saudi Arabia, and has been directly responsible for a number of new innovative national initiatives like the Smart Cities and SMB Automation programs.

In his excellent interview with us at Telecom Review, Dr. Sindi highlights some of the major successes and projects he has executed as CEO of Dawiyat, the role the company will play in both the Kingdom Vision 2030 and National Transformation Program 2020 – and discussed the success of its MoU's with telecom operators STC and Zain.

Dawiyat has enjoyed phenomenal success since its inception in 2009. Can you tell us a little more about the company's recent history, and highlight some of the major projects Dawiyat has embarked upon since 2009?
Dawiyat Telecom, a wholly-owned subsidiary of Saudi Electricity Company, was established in 2009, with the aim of optimizing investment of SEC's fiber optic systems covering more than 71,000 km across the Kingdom including villages, hamlets and borders.

Dawiyat's success in living to its mission was evident by providing an important strategic project, that of providing passive fiber optic infrastructure service to Zain for 15 years, thereby enabling Zain to build its own active network and services around the Kingdom.

In 2017, Dawiyat has been honored as one of the key contributors to Kingdom's Vision 2030 by participating in one of its programs, the National Transformation Program 2020; the most prominent of which is the National Broadband initiative lead by MCIT to deploy the broadband by delivering fiber optic systems to homes. In Q4 2017, Dawiyat launched the first phase of its Fiber-to-the- Home (FTTH) broadband project implementation and deployment in a number of cities in the Kingdom.

How important is the role that Dawiyat is playing in terms of helping execute the objectives of the Kingdom Vision 2030 and the National Transformation Program 2020 by implementing its integrated telecom services to improve connectivity speeds all over KSA?
Dawiyat plays an important role in the Kingdom's Vision 2030 and the National Transformation Program 2020 because Dawiyat is a company with a unique business model being an Open Network and wholesale infrastructure provider to all infrastructure licensed service providers and based on the fact that it sets on top of the most extensive power network infrastructure assets in the Kingdom of Saudi Arabia where the power pathway connects every single home and business entity within the Kingdom.

Dawiyat built its new network infrastructure and systems capabilities on top of a very robust electrical network, utilizing existing power ducts infrastructure across the Kingdom through local substations', overhead and underground fiber networks throughout all its cities, towns and hamlets. And what we have proven is how we can take that core infrastructure and rapidly rollout cities more efficiently thus providing a more robust economic value than others.

Dawiyat has previously declared that it is aiming to become the international connectivity link between the world's East and West due to its strategic position in the Arabian Peninsula. Can you provide us with an update in relation to its progress in this regard?
Saudi Arabia is blessed with its geographical location as it links the west and the east. As such, Dawiyat, based on its license, partnerships and regulations, seeks to leverage such advantage by developing state-of-the-art fiber optic network to connect with all neighboring countries. Let's recall that Dawiyat is an open network and a wholesale provider of choice, therefore this extensive border to border reach is built to be offered to licensed, mobile, fixed and data service providers for them to connect to their international partners.

As a result, Dawiyat has already interconnected with Jordan across the borders and the services will commence once relevant authorities have granted permission. On the other hand, Dawiyat is currently in active discussions to partner with leading submarine cabling systems in order for Dawiyat to become the landing party for these systems in Saudi Arabia which is done in close coordination with our strategic partners. Needless to mention that such plans are in total alignment with the Kingdom's Vision 2030; Dawiyat being bestowed the honor as one of the key contributors to the Vision 2030 by participating in the National Transformation Program 2020.

By constructing this significant fiber infrastructure you can link Indian and Chinese service providers to important internet hubs in Europe. Can you outline to us what are the primary benefits of this for both Chinese and Indian service providers?
Dawiyat will be operating within its newly awarded "Wholesale Infrastructure Provider" license in building new active and passive fiber infrastructure with the intent to offer it to licensed service providers. With this principle, Dawiyat is to ensure fair cooperation with partners and will become the right partner for these providers due to the strategic location of Saudi Arabia providing shorter routes and lower latency.

In addition, Dawiyat's fiber network offers unparalleled resiliency with extended reach beyond what others can provide. Moreover, Dawiyat makes available alternative routes with much lesser known challenges and interruptions usually faced when dealing with traditional routes.

Is this information true that Dawiyat applied for a wholesale license?
Yes, we have the ambition to be the leading wholesale telecommunications company and achieve the objectives of meeting the requirements of Vision 2030 to provide services to our carrier partners through fiber optic network in Saudi Arabia and the region, which adds benefits to the national economy and contributes to the comprehensive national telecommunications infrastructure. I'm happy to announce that we had successful awarded the very first "Wholesale Infrastructure Provider" license by Communication & Information Technology Commission (CITC) beginning of this month (September) under our newly established company owned by Saudi Electricity Company named "Dawiyat Integrated Telecommunications & Information Technology Company" which will be offering Active and Passive Telecom service and infrastructure, In-Building Solution (IBS) as well as building, owning, leasing and operating Tower infrastructure and other service according to the awarded license to other Services Providers within Saudi Arabia.

In late 2017, Dawiyat launched the first phase of its FTTH broadband service in a number of cities as part of the National Broadband Initiative. How much of a success has that program been?
The phase one of Dawiyat's FTTH which covers subscribers' homes in various cities and provinces in the Kingdom, including Riyadh, Dammam, Jeddah, Al- Medina Al-Munawarah and Hafr Al-Batin, has been completed; becoming immediately available for service providers to exchange data, content and access to the internet.

The project aims to provide a strong communications infrastructure and keep pace with the National Transformation Program 2020 and contribute to realizing the vision of the Kingdom's Vision 2030. So far we have connected over 150,000 homes and aim to finish the year with over 200,000 homes connected.

Dawiyat has disclosed in the past that it was actively engaging in talks with the regulatory body in a bid to receive a facility based license in order to monetize its infrastructure investment. Have you been successful in obtaining the license?
Dawiyat has requested many licenses from the Communications and information Technology Commission (CITC). Consequently, Dawiyat has obtained a number of licenses such as Carrier Service Provider (CSP) for the lease of telecommunication facilities, Data Hosting Provider (DHP), and Internet Service Provider (ISP) license. This is in addition to the wholesales license.
Dawiyat has leased part of the optical fiber to a number of telecom companies. It is looking forward to speed up obtaining additional licenses to enable it to fulfill its mission and role in accordance with the National Transformation Program 2020.

Dawiyat has signed MoUs with telecom operators STC and Zain. How successful have those partnerships been for your company?
Dawiyat is building and operating open-access for all network and non- discriminatory network platform empowering carriers and services providers in the kingdom of Saudi Arabia and helping them to focus on their core businesses.

We have signed a number of MoUs to provide fiber optic home service (FTTH) with Saudi Telecom Operators (STC), Saudi Mobile Telecommunications Company (Zain), Etihad Etisalat (Mobily), and also we seek to complete this process with the rest of the operators and service providers.

What are your primary objectives and goals for the remainder of 2018?
There is a lot more to do, there are great opportunities in the Saudi market. We are probably entering the most exciting year for Fiber-to-the-Home connectivity across the kingdom of Saudi Arabia, looking for current and future activities in the kingdom leveraging on the National Transformation Program 2020 and the Kingdom's vision 2030.

I think we are seeing increasing awareness of the positive impact of that extensive fiber connectivity with such technological advancement helping in adding advantage to the national economy and contributing to the overall development in addition to creating employment opportunities for enthusiastic Saudi youth.

In addition, Dawiyat is the best entity that is strategically positioned to build a nationwide IoT platform, in partnership with its natural strategic allies, to serve the smart meters, smart cities and other strategic initiatives in Saudi. This is a very important area that Dawiyat will continue to push with full force due its Open Network position.

We will continue to build on that momentum to become even more attractive to the government to be able to invest more in the national broadband initiatives and focus the attention on helping new infrastructure operators to demonstrate on the market more efficiently so we can actually give a better economic value and diversification to service providers by supplying more efficient and better quality services at lower cost.