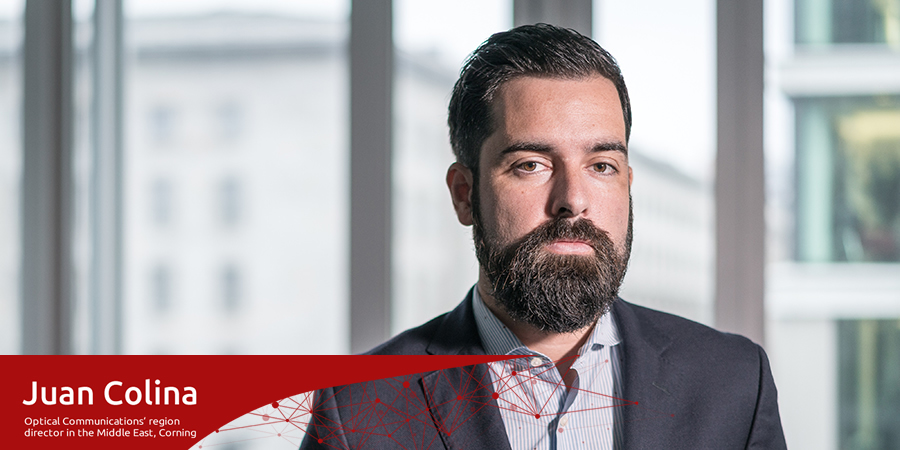 Corning Inc., a company which is essentially built on the idea of innovation, has been serving the MENA region for several years now. This year marked the 50th anniversary of the company’s world-changing invention of low-loss optical fiber.

The Middle East and North Africa region is one of the most socio-economically diverse places in the world. It is home to the Arab world’s most advanced markets, such as the UAE and Saudi where fiber to the home penetration is among the highest in the world.

Telecom Review secured an exclusive interview with Corning Optical Communications’ region director in the Middle East, Juan Colina to discuss the company’s experience throughout the pandemic along with their most recent work in the region with regards to FTTH and inclusion.

How has Corning contributed to the region’s FTTH deployment and your work specifically with regards to MDU systems?

The GCC has proven to have one of the highest penetrations of fiber in the world, with countries such as UAE and Saudi Arabia overtaking early adopters such as South Korea and Japan. According to the most recent report from the FTTH Council MENA, the UAE has the highest fiber penetration levels of any country in the world, with 95.7 per cent of consumers in the Gulf State having access to FTTH services. As the region continues to increase its focus on 5G, fiber plays a key role in enabling the comprehensive roll out of the technology.

This year, Corning marks the 50th anniversary of the company’s world-changing invention of low-loss optical fiber. The breakthrough material made possible today’s ever-faster telecommunications networks that link neighborhoods, connect cities, and bridge continents. In fact, Corning provides not just the in-depth knowledge of the product, but also the know-how to cable that optical fiber.

In our work around FTTH deployment in the region, our key focus is to make available for our customers the innovations designed to address specific telecommunications network challenges. We are also strengthening our efforts in helping customers with the transition from their current optical network to a future proof 5G network.

When it comes to MDU systems, we believe there is no one-size-fits-all. MDU systems face diverse challenges, and Corning uses its carrier expertise to develop a wide range of flexible solutions to address the varying requirements of MDU architectures and environments.

The pandemic has undoubtedly moved us towards a ‘new normal’. How does Corning plan to navigate the post-pandemic industry ecosystem? What are some of Corning’s strategies moving forward?

These unprecedented times have brought a significant focus on connectivity like never before, with societies and businesses relying on technology for remote work and distance learning among others. As fiber marks its 50th anniversary in 2020, there hasn’t been another time in history during which we have felt the impact of this breakthrough invention so strongly. As we navigate this ‘new normal’, Corning continues to support its ecosystem meet its current needs by increasing the speed and capacity of optical networks around the globe, while reducing installation costs.

As we continue to evolve the optical communications business at Corning, we are no longer recognized only as a manufacturer of optical fiber and cable, hardware and equipment, but as a comprehensive provider of industry-leading optical solutions across the broader communications industry. The innovation set in motion by the landmark invention of optical fiber continues to build momentum and is driving breakthrough technologies such as augmented and virtual reality, artificial intelligence, robotics, and 3D printing.

The MENA region is one of the most socio-economically diverse regions in the world. While the GCC has, for the most part, achieved significant FTTH deployment rates over the past few years, the rest of the region seems to (relatively) be lagging behind slightly. Does Corning have any plans to drive inclusion in these countries? If yes, how so?

While the GCC is a region we are very active in through our longstanding relationships with the local telecom operators, a lot of our work over the past few years has also been focused on the wider MENA region. For instance, this year, we have announced a strategic partnership with Benya Capital, a leader in telecom and technology solutions and infrastructure in Egypt and the region and The Arab Organization for Industrialization, to be the strategic supplier of optical fiber for the largest fiber optic cable factory in Egypt, Africa and the Arab region.

We are continuing our active participation in FTTH Council MENA where we work side by side with many other industry members to unlock more opportunities in the region, to promote innovative possibilities and further deployment, and to create beneficial collaborations.

We continue also to encourage the adoption of fiber as the preferred medium of choice across multiples types of applications including 5G, wireless applications and smart cities in the MENA region. No other known medium has the capacities that fiber brings to the table and those capacities are vital to achieve the transmission rates, low latencies and bandwidths of 5G.

Corning recently celebrated the 50th anniversary of fiber. Could you provide us with a comment on this?

In 1970, three Corning scientists Drs. Robert Maurer, Donald Keck, and Peter Schultz invented the first low-loss optical fiber, which helped launch the age of optical communications. Over the past 50 years, the groundbreaking invention of fiber has enabled the development of new technologies in data communications, video streaming, cloud computing, and more that enable the connected lifestyle the world is accustomed to today.

Corning now operates several optical fiber plants globally and even more impressively, this single invention led to what is today Corning's largest business segment – optical communications – in which applications such as fiber to the home, indoor wireless technology, and hyperscale data centers are served. This groundbreaking invention also opened the door for other significant inventions, such as bend-insensitive fiber called ClearCurve® optical fiber, which can bend at 90-degree angles without sacrificing performance, released in 2007 or Corning's EDGE data center solution, introduced in 2009.

It is a matter of pride for us that since its invention, Corning’s optical innovations have been recognized with multiple awards, including the Malcolm Baldrige National Quality Award. The inventors of optical fiber and ClearCurve fiber have been named to the National Inventors Hall of Fame. And in 2017 Corning received a Technology & Engineering Emmy® award from The National Academy of Television Arts and Sciences for its invention of low-loss optical fiber.

And since that memorable moment on August 7, 1970, Corning has delivered over a billion fiber kilometers worldwide. It’s amazing how optical fiber, which is as thin as a human hair, has change the world and allowed humanity not only to imagine, but to achieve things once considered impossible.