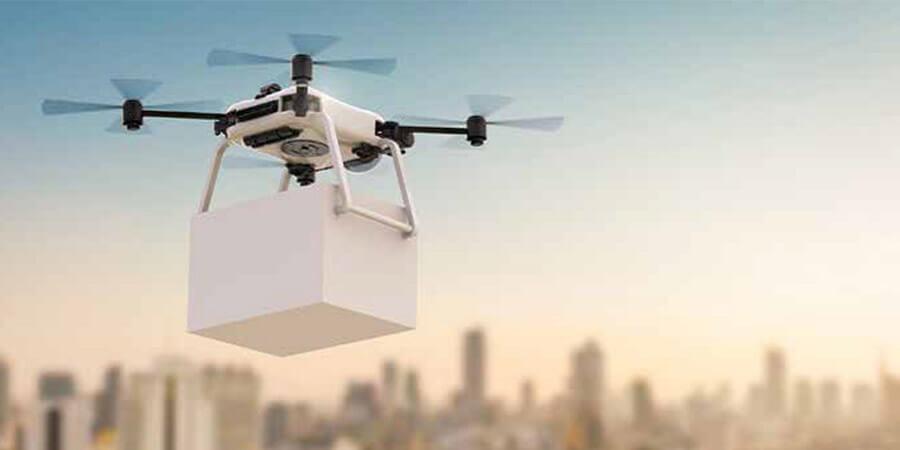 Delivery drones continue to capture the attention of the news media, but will not be a major factor for several years, according to Gartner research, which indicates that the return on investment has not been proven either in regard to the cost of the drone, operational costs and a single customer delivery. That could be the case for drones delivering goods, but what about delivering people?

At the 2017 World Government Summit in Dubai, the city's Roads and Transportation Authority (RTA) announced that the Chinese-made Ehang 184 passenger drone will begin "regular operations" around the smart city in July this year. The drone, produced by Guangzhou-based Ehang Inc., was first unveiled during the CES 2017 gadget show in Las Vegas. The PFV (personal flying vehicle) has been tested in Dubai - seen flying around the Burj Al Arab.

"This is not only a model. We have actually experimented with this vehicle flying in Dubai's skies," said H.E. Mattar Al Tayer, director-general and chairman of the Board of Executive Directors of the Roads and Transport Authority. Al Tayer didn't specify whether or not these flights were manned, but recent upgrades applied to the EHang 184 suggest that carrying passengers is the desired goal in Dubai.

The EHang 184 is now capable of half-hour flights with about 31 miles of range, according to the Associated Press, but passenger capacity is limited to one 260-pound person with a single small suitcase or bag. The passenger would punch in their destination and strap-in before the PFV would take-off. The drone would communicate with a control room on the ground via a 4G wireless network.

The future of passenger drones is controversial because the technology is very new. Innovation in aerial drone technology and in aerial traffic coordination, control and collision-avoidance could result in rapid proliferation of passenger drones for civilian travel. Dubai has taken the first step by planning to introduce futuristic air-taxis. Developers of the technology are working to overcome many challenges, including noise, increasing loads, increasing flight times, airspace regulations, and scarce data on both safety and general operations.

"The future is now in the making," Al Tayer continued. "Our talk about autonomous vehicles has become a reality. It is now high time to move to autonomous aerial vehicles." He indicated that Dubai's strategy is to incorporate all public transport - including trains, buses, marine transit, taxis, and even private vehicles - into one smart transport system.

Al Tayer urged car manufacturers to "shift focus from market share to mobility share," adding that we "need to improve safety, reduce the travel time as it affects the economy and protect the environment as we talk about green economy." Al Tayer added: "According to studies, one car sharing will replace nine to 13 vehicles. This will decrease demand of private cars."

Dubai is claiming bragging rights as the first city to introduce flying passenger drones, and this hasn't gone unnoticed by the world. Officials in the US state of Nevada have been seeking the Federal Aviation Administration's approval to introduce the EHang 184 according to reports, but passenger drones face strict scrutiny in the United States.

Regulations for the non-recreational use of small unmanned aircraft in the US came into effect in August last year. EHang Inc. optimistically predicts it will be two to three years before its heli-cabs could be seen in the US, but analysts believe it will take more time, requiring lots of testing beforehand.

While the civil markets (personal and commercial) have been wading through regulation by various governments, the popularity of drones in these markets has not diminished, according to Gartner analysts. The overall drone market will see substantial growth, but the dynamics of the personal and commercial submarkets are very different.

Drones in the commercial sector are used to take photos and video, for security purposes, and to conduct inspections or surveys, among other things. With the number of commercial drone operations outpacing the pool of certified drone pilots, experts say more training is needed to help young flyers operate the planes legally and safely.

Commercial pilots in the US must obtain an FAA drone license, and some companies that employ these pilots have started selling classes that help students prepare for the FAA test or simply to determine whether they would be interested in a drone pilot career - as a result of a significant shortage of skilled aviators in the new sector.

Nevertheless, the production of drones for personal and commercial use is growing rapidly, Gartner says, with global market revenue expected to increase 34 percent to reach more than $6 billion in 2017 and grow to more than $11.2 billion by 2020. It's a hyped market, and some of the world's tech giants including Google, Apple and Amazon are all involved in developing drone technology.

The discovery of an Amazon patent shows the company's incredible plans for the future of drones after it successfully secured its right to produce ‘flying warehouses' that would deploy drones from high in the sky to deliver goods to homes below. The patent was granted by the US patent office in April, but it was only recently uncovered by tech analyst Zoe Leavitt.

The ‘airborne warehouses' would fly over cities at 45,000 feet which would then subsequently release fleets of drones tasked to deliver products on demand to customers' residences. It has also been disclosed that Amazon plans to save energy by performing this method of delivery by dropping the drones using gravity before kicking in their motors.

Interestingly, Gartner research suggests the market for commercial drones is much smaller than personal drone use, with a significantly higher average selling price in comparison with personal drones. With more countries solidifying their drone regulations, the market is beginning to stabilize, and companies are now buying drones to test and deploy in nearly every industry.

"Personal drone vendors are now aggressively trying to position themselves in the commercial market," says Gerald Van Hoy, senior research analyst at Gartner. "Recent technological advances blur the lines, allowing personal drones to be used in many special-purpose applications such as surveillance, 3D mapping and modeling."

Industrial inspections have been much more successful, primarily in oil and gas, energy, infrastructure and transportation, according to Gartner. Regulations do not have as much of an impact on the market as was originally thought. Most inspections are close (within three meters) and low since they are examining equipment that is near or on the ground. Gartner expects the inspection segment to dominate with 30 percent of the commercial drone market through 2020.

Despite the excitement surrounding Dubai's upcoming EHang heli-cabs, delivery drones will be "mired in logistical issues, like the time needed to return a drone to its origin after delivery, and will amount to less than one percent of the commercial market by 2020," said Mr. Van Hoy. "We expect that delivery drones will begin finding a niche in business to business applications first, particularly for internal services within one company where logistics will not be such a big factor."