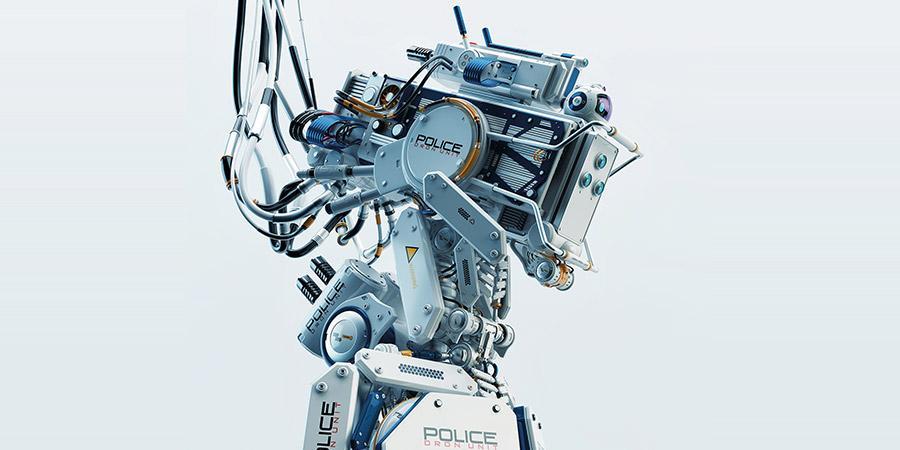 Dubai Police formally inducted a robotic policeman into the force this year. The robot, referred to by the media as 'Robocop', can read human faces and identify potential threats using artificial intelligence. Via the robot, citizens can report a crime, submit paperwork, or pay fines for traffic violations using a touch-screen located on an area of the robot that represents a human chest.

Dubai Police worked with Watson, IBM's AI system, on voice command recognition. The robot was built by Barcelona-based PAL Robotics, with its mission of "Leading humanoid robotics for the real world." The company has been developing humanoid robotic solutions since 2004. The prototype model was unveiled in 2016 at the annual Dubai-based GITEX electronics trade show.

The robot, which will patrol busy areas of Dubai, is evidence of a government program aimed at replacing some human law enforcement officers with machines. If the 'Robocop' experiment is deemed successful, Dubai Police said the unarmed robots, which are dressed in the colors of Dubai Police, could make up about 25 percent of the force's patrols by 2030. The robots could also improve services and security for Dubai Expo 2020.

Despite Hollywood movies like I, Robot depicting the potential catastrophes that could unfold if artificial intelligence plays against humanity, Dubai Police Brigadier Khalid Nasser Al Razooqi, director general of the Smart Services Department, seems to believe the advantages outweigh the disadvantages. "These kinds of robots can work 24/7," he told Reuters. "They won't ask you for leave, sick leave or maternity leave. It can work around the clock."

The real value in Dubai's 'Robocop' is its ability to use artificial intelligence - a move being undertaken by other governments around the world. The robot can compare faces with a police database and flag matches to the police headquarters. The robot is also capable of scanning vehicle license plates, and its video feed can assist police looking out for risks such as unattended items in popular areas of the city.

In China, similar projects are underway to implement artificial intelligence into law enforcement. The country is well-known for its tough citizen surveillance, and is reportedly seeking to look into citizens' futures by using technology designed to predict and prevent crimes. Police in China are working with companies to develop artificial intelligence; they say will assist them in identifying and apprehending suspects before criminal acts are committed, FT reported.

Vice-Minister of science and technology, Li Meng, explained: "If we use our smart systems and smart facilities well, we can know beforehand who might be a terrorist, who might do something bad."

Guangzhou-based Cloud Walk has been trialing facial recognition technology that can track a person's movements, such as visits to shops where weapons are sold. This tracking ability could help authorities assess an individual's chances of committing a crime. Cloud Walk's software can warn police when a citizen's crime risk becomes dangerously high, which would then allow authorities to take action.

A spokesperson from the company told FT, "The police are using a big data rating system to rate highly suspicious groups of people based on where they go and what they do." An individual will be flagged by the technology if he/she "frequently visits transport hubs and goes to suspicious places like a knife store," the spokesperson added.

China is famous for its distrust of outsourced influence and internal uprising. Its citizens are no strangers to being evaluated by the government; a mammoth task monitoring 1.4 billion people. The government has even developed 'China's Social Credit System' (SCS) to become mandatory in 2020, which will take in all of the big data tools of the information age, including electronic purchasing data, social networks and algorithmic sorting, to be used as an overall credit score for citizens.

New and effective technology such as smartphones and fast-developing AI software is amplifying the nation's surveillance capabilities, often taking it too far, some claim. Chinese state media have reported instances of facial recognition software being used to infringe minor offences, such as identifying and shaming jaywalkers.

Cloud Walk's artificial intelligence technology will also be used to track people with a criminal record, according to FT, and monitor those who enter "high risk" places such as hardware stores where potential weapons can be purchased. The Cloud Walk spokesperson said, "Of course, if someone buys a kitchen knife that's OK, but if the person also buys a sack and a hammer later, that person is becoming suspicious."

Some cities caught on to the crime prediction trend years ago. Milan has been using a system called KeyCrime for over a decade now, which is able to predict where robberies might happen based on past data.

When KeyCrime was first introduced in Milan in 2007, about 27 percent of robberies were being solved. The following year, after the software had been introduced, successes went up to 45 percent. Similar technology called PredPol, used in the US by more than 20 to 50 of the largest police departments, uses data to forecast when and where a crime is likely to happen.

The difference between China's predictive technology method and Milan's, is that China is using its extensive archive of citizen data to predict who is more likely to commit a crime, as opposed to where a crime is likely to occur. According to HIS Markit research, China has over 176 million surveillance cameras active, and the number is growing.

China is also using AI in crime prediction to match an individual's identity even if they are spotted in different places wearing different clothing. This method of "personal re-identification" is considered a relatively new technological achievement.

Professor Leng Biao of the Beijing University of Aeronautics and Astronautics explained, "We can use re-ID to find people who look suspicious by walking back and forth in the same area, or who are wearing masks."

China has been criticized for not carrying out necessary checks and balances in its judicial system, and critics say citizens could find themselves at risk of being targeted by error of the nascent technology. Beijing Weiheng Law Firm partner Li Xiaolin warns, "In China, wrongful verdicts with no evidence are very hard to reverse on appeal, because of the judicial system."

The concept is, however, undeniably forward-thinking and could lead to safer and more secure communities. The Dubai government has even bigger plans for its law enforcement, such as egg-shaped robots used in parking areas to issue warnings about traffic violations, and self-driving motorcycles could also be sent out.

There is also talk of Dubai developing the "world's largest robot" which can run at 80kmp.The robot will stand at 3 meters tall and carry heavy equipment and be maneuvered by a police officer seated in a cabin inside.

"We are looking to make everything smart in Dubai Police," said Brigadier Khalid Nasser Al Razouqui, the General Director of Dubai Police's Smart Services Department. "By 2030, we will have the first smart police station which won't require human employees."