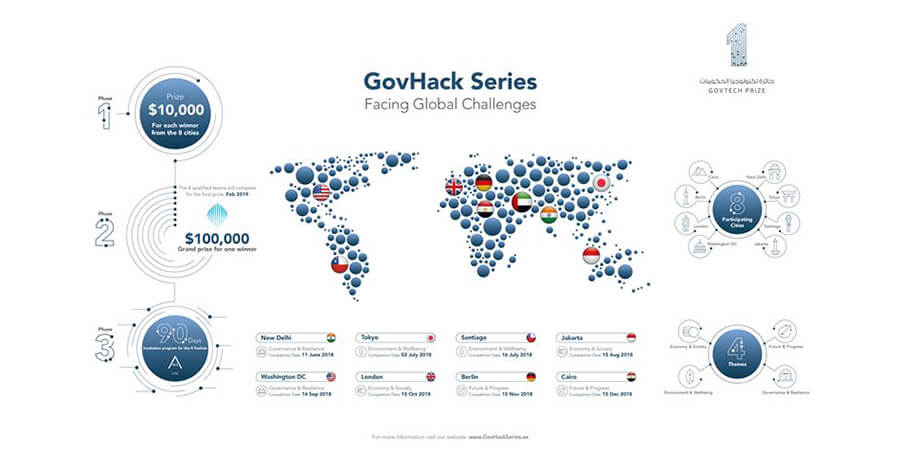 The United Arab Emirates government has launched a global emerging technologies startup competition dubbed "GovHack Series" in eight major cities around the world. The competition is part of the GovTech Prize, a UAE government initiative that has been running for its 6th year.

The GovTech Prize works throughout the year to search for the best tech government solutions developed by governments and individuals, upon which they are awarded at a ceremony during the World Government Summit. Taking place from May until December 2018, the GovHack Series will first take place in New Delhi, Tokyo, Santiago, Jakarta, Washington DC, London, Berlin, and Cairo.

The GovTech Prize is organized in partnership with the World Government Summit, Dubai's Area 2071, business and government consultants McKinsey & Company, and in collaboration with the Washington-based start-up networking platform Union. The contest aims to find the world's most creative tech startup solutions to help solve global challenges facing governments.

"Launching the GovHack Series in eight major international cities is a new milestone, and a new achievement registered by the GovTech Prize in its mission to inspire individuals, governments and private entities around the world to innovate and deliver future-ready ideas," said His Excellency Mohamed Bin Taliah, Assistant Director-General for Government Services Sector, and Assistant Director-General for Corporate Services Sector at the Prime Minister's Office in the Ministry of Cabinet Affairs and the Future.

"The objective is to motivate young minds, students and government employees from around the world to develop smart government initiatives, and propose technological solutions to address the most pressing global challenges. The Prize also propels the most innovative of these ideas to an international stage, presenting them at the World Government Summit," H.E. added.

GovHack Tech Prize, its partner the World Government Summit and its knowledge partner Mckinsey will host a series of roundtable discussions during the competition dates to address the series' four main themes. The themes covered are divided into four main categories: Governance and Resilience, Environment and Well Being, Economy and Society, and Future and Progress.

Start-ups taking part in the competition will be evaluated by a panel of experts, based on criteria such as creativity, impact on society, sustainability, scalability, feasibility, and prospects for commercialization. Winners from each of the eight cities will be awarded a US$10,000 prize, as well as a chance to compete for the US$100,000 grand prize at the final event, taking place in Dubai, on the sidelines of the World Government Summit in February 2019.

Winners will also have the opportunity to collaborate with their governments to implement their technological solutions, and will be invited to participate in a 90-day business incubator program in Dubai's Area 2071.