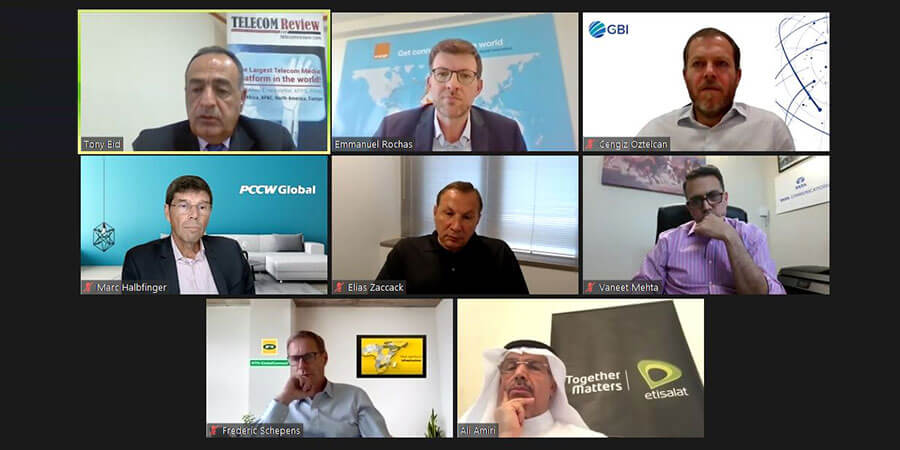 Telecom Review concluded yet another successful webinar, titled: Capacity and Data Traffic: Enabling a Seamless Experience. The virtual event brought together a panel of key experts in the industry, with representatives from Etisalat, MTN GlobalConnect, PCCW Global, Tata Communications, SES, Orange and GBI.

Toni Eid, Founder of Telecom Review and CEO of Trace Media, who was the panel’s moderator, welcomed and introduced the panel of guests before getting into the topic of the day.

The first part of the discussion examined the effect of COVID-19 on the wholesale and capacity industry, and its management of the huge amounts of data generated throughout the pandemic.

Emmanuel Rochas, CEO, Orange International Carriers, highlighted that COVID-19 is, first and foremost, a global humanitarian crisis. Beyond the human cost, the pandemic has turned the wholesale industry on its head.

“The crisis has been dramatic in terms of human impact. It also had a massive impact on our international wholesale business. We have experienced a very strong shift in usage in terms of our business,” Rochas said.

Orange’s CEO, along with the other panelists, agreed that while there was a notable increase in voice traffic, international roaming plummeted.

“Our networks have either been emptied or overloaded. We have seen an increase in domestic voice whilst international voice suffered,” he said.

PCCW Global’s CEO, Marc Halbfinger, noted a significant impact in terms of traffic flows from their headquarters in Hong Kong. The virus presented itself very early in China’s main cities, and so the correlation between COVID-19 and network traffic became apparent as it made its way across the world.

“As you follow the COVID-19 story around the world, so too does traffic get impacted.” Halbfinger also agreed that while there was an uptick in data traffic, roaming had been negatively impacted due to the lack of travel.

When asked how Etisalat handled the surge in network demand, Ali Amiri, Group Chief Carrier & Wholesale Officer, attributes their successful response to the infrastructure they already had in place, and their overall “readiness”.

He said: "In order to face this challenge, we used everything we already had in place. We increased capacity and leveraged our leadership in fiber-to-the-home.”

Next speaking on the panel was Frederic Schepens, CEO of MTN GlobalConnect. Schepens echoed the other panelists saying that voice and data traffic had increased, and roaming had taken a major hit, almost reaching zero.

“What we saw in certain markets was a 30-35% growth in terms of data uptake. Voice also grew substantially because people were messaging and calling each other more. The only thing that fell off a cliff was the entire roaming fabric within GlobalConnect,” he said.

Tata observed the increase in voice and data. According to Mehta, the growth in data consumption is driven by OTTs, such as Netflix, as lockdown confined people to their homes.

GBI’s CEO, Cengiz Oztelcan, agrees that there are both positive and negative impacts for the industry, saying “there are two sides of a coin here.”

While there was an increase in demand for basic services, all new and pending projects were pushed to the side in order to cut down on spending and avoid unnecessary costs.

“Operators started cutting down on their budgets after pandemic, so anything that was not absolutely necessary was canceled or postponed. There was some increase in demand but anything new or exciting had to be postponed to cut down on investments. That was the negative side of the coin that we experienced.”

SES Networks is the largest satellite operator and their mission is to provide global solutions. Elias Zaccack, Executive Vice President of Global Sales, spoke about the increase in demand for satellite services directly to the home and in rural areas.

“We look at the pandemic as causing a shift in where the demand is. If you think of pre-COVID, there was a heavy demand in urban areas. Now with people working from home, there’s a shift to rural areas.”

He went on to explain that rural areas are far more dependent on satellite connectivity than urban areas, so SES had to provide more connectivity services in the less connected areas around the world. COVID-19 affected the company in different ways, but similar to other panelists, data services are in great demand.

“Our fixed data business is actually doing well in terms of demand and in terms of our ability to support them,” he said.