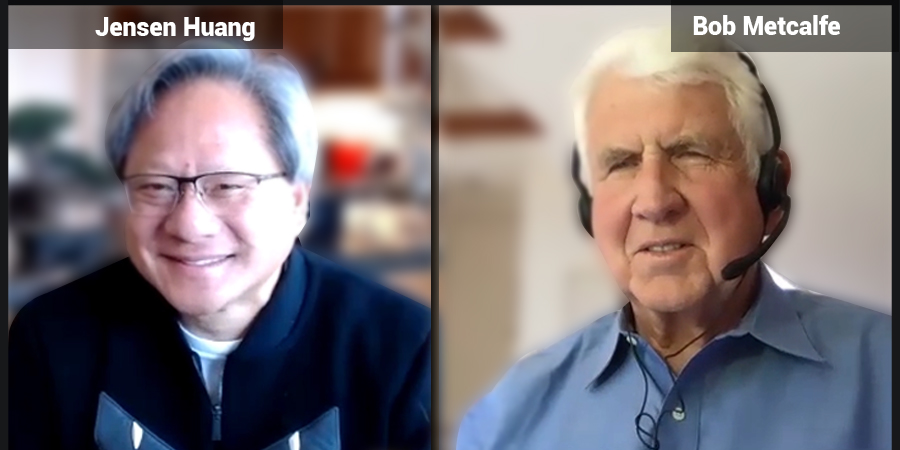 On the 40th anniversary of the very first Ethernet specification – published 30th September 1980, in the famous “Blue Book” by a DEC/Intel/Xerox consortium- Jensen Huang, Founder, President & CEO of NVIDIA interviewed the inventor of Ethernet, Bob Metcalfe.

This first specification of Ethernet was a radical, forward-looking decision that led to the formation of IEEE 802. Few could have predicted the connectivity revolution this would enable – beginning with networked PCs and peripherals, leading to Local Area Networks (LANs), client/server systems, the WAN (Wide Area Network) and pan-global connectivity – not to forget other breakthroughs such as wireless networking, high speed data center networks and the Internet of Things (IoT).

This interview reveals that the Ethernet journey still has a long way to go. Jensen Huang was genuinely excited about developments: “In a strange sort of way, Bob, Coronavirus has put a ton more pressure and a ton more focus onto the Internet and networking”.

Bob compared the 1980 standard with what is happening today. He said, “There's no relationship to the Ethernet standard of 2020. There's been a lot of evolution over the 40 years.”

Jensen suggested that in the future, “We're going to have an application that partly runs at a data center, partly runs in another data center at the edge, and then partly runs on autonomous machines roaming around the world.” He later talks about moving beyond 2-D images to perception in virtual reality: “Today, because of your invention, Bob, we have the ability to share in different places... in the future will be able to teleport ourselves to different spaces... teleport is going to happen. It's just going to be moving photons, not atoms”.

“Hearing Jensen Huang, or Bob Metcalfe, speak would be a draw in itself, but to have both together in dialogue is very exciting,” said Mark Fox, CEO NetEvents, the company organizing the event.

“They are not only two of the greatest tech visionaries and inventors, but they are also highly successful entrepreneurs sharing real business insights into the astonishing success of Ethernet,” he added.

Some of the discussion topics included: vendor innovation versus standards commoditization; new Ethernet technologies such as 800Gbps, Optical switching, and Quantum Ethernet – plus Bob’s new focus on power consumption and the need for a greener Ethernet. Finally, we heard a live Q&A session with invited international IT and business media.

“The interview is long enough for a truly in-depth and evolving discussion” says Tam Dell’Oro, “It began with Jensen, clearly excited to be meeting the inventor of Ethernet, wanting insights into the Xerox PARC creative environment, what was needed and how Bob first tackled the challenge. Then we heard these two highly successful entrepreneurs sharing experience of the challenges faced by start-ups in an environment of established giants like IBM. They compared the motivational slogans that kept them going and, of course, the vital role of industry standards.”

“Jensen talked about the anticipated decline in Moore’s Law and recognized the need for a new type of processor – one that would later prove essential for the evolution of machine learning. And we end up with two new-found friends sharing visions on the future of networking and the challenges of IoT. There is so much rich material here – this is definitely one to listen to again and again,” he continued.