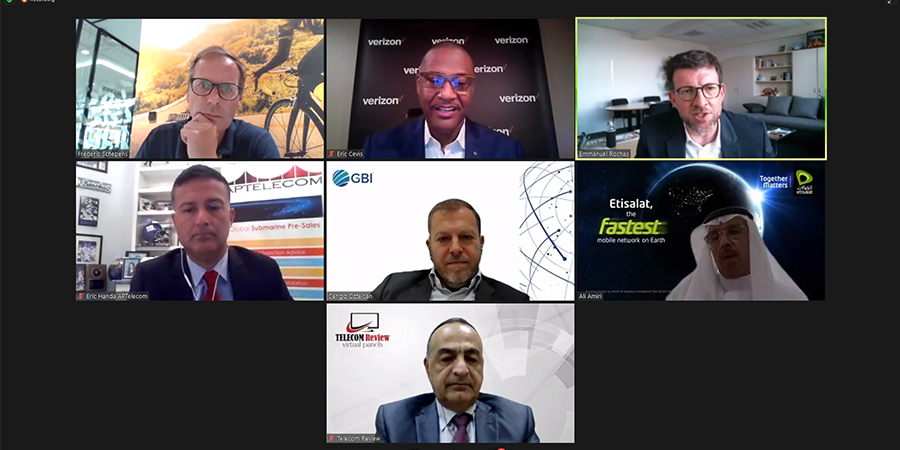 As part of Telecom Review’s panel entitled “Digitizing the capacity industry,” Toni Eid, CEO of Trace Media and founder of Telecom Review, chaired the session and asked a question about the right regulatory and industry policies that need to be established to encourage (digital) infrastructure investment.

Eid’s quick comment within the discussion of regulations, connectivity, partnerships, etc., is that many are saying that “data is the new oil, but for regulators — it’s selling spectrum.”

Among the featured panelists, industry leaders from GBI, APTelecom, Verizon Partner Solutions, and Orange International Carriers responded by sharing their perspectives on regulators and their prospects — as an industry at large — to become sustainable and compliant in the long run.

Upon working closely with regulators, Cengiz Oztelcan, CEO of GBI, said that these authorities are, in general, quite conservative and not open to digitalization efforts or improvements. Some prefer to ‘wait and see’ from neighboring countries or watch other regulators. This results in a very tricky and long process. “Every country in the world today is trying to become a digital hub. This is on everyone’s agenda.”

Despite trying to attract digital players, the real challenge is matching the environment with the companies that as per Oztelcan’s ballpark estimation, have a three-to-five-year difference. Hence, the real question for him is “how do we really close that digital divide between what’s being done in practice and what’s being supported by the regulators?”

Depending on the location, what can put pressure on them is hearing similar messages from different parties. In this way, regulators can “create an environment that’s easier for us to operate on.” From a legal perspective, Oztelcan pointed out that these go as basic as providing safe harbor type of environments that will make sure that “our investments today will not be declared non-compliant or obsolete by any regulators.”

As regulations can change on short notice and put severe measures on operators and related companies, what they can do is start a dialogue and lay out convincing points that “what we’re trying to do here is for the good of the countries we are present in and the regions that we’re operating in.”

For Eric Handa, CEO & co-founder of APTelecom, regulators are in a challenging position as they are dealing with ‘animals’ such as telcos that are traditionally buying access as well as OTT players. The former is being offered at the highest price possible while the latter wants the lowest price possible.

Yet, Handa emphasized that the “cost and speed of connectivity dictate whether a city or a country will be a hub that can support certain industries such as banking, manufacturing.” Hence, connectivity cannot be stifled in terms of duopoly or triopoly. “There is a fine line between how much competition there is and isn’t.”

If we look at it historically, the three Ts — tourism, trade, and telecom — constitute a large portion of a country’s national output (GDP). Thus, cannibalizing the telecom revenue is not a situation regulators want to happen as they can have ‘mutiny’ at their hands. A suggested solution from Handa is replacing the aspects of telco businesses that are not doing well so that they will continue to grow.

“A lot of regulators, in general, lack industry experience. So, I think, training and education are critical to work with them and get them up to speed of what this glorified utility — telecoms — face,” Handa said. Offering a utilitarian product similar to water and power, telecom is forced with a tremendous competition that the water and power industries don’t have.

Favorably, a trend being seen globally, that will soon be in the Middle East region as well, is the consolidation within the telecom industry. “By 2030, the numbers are expected to decrease the number of global telcos by at least 30 to 35%.”

Citing rural broadband as an example, Eric Cevis, president of Verizon Partner Solutions, said that with regulatory bodies partnering with telcos, they must make sure that everyone has the bandwidth they need across the globe. “Those types of regulatory partnerships will continue to help in advance the things that we're doing going forward.”

Verizon alone has invested $53 billion on the 5G spectrum. “As we look at our C-band investment, it clearly comes with good collaboration, partnership, and recognition with the regulatory bodies as they need to make certain that we can allow communications to happen across the globe.” Clearly, regulatory bodies are protecting the interests of the consumers in the same way that telcos, as a business, are looking into. Accordingly, they can get that ‘win-win proposition’ from a regulatory standpoint and what they do for end users.

Cevis also highlighted Verizon’s sustainability efforts. With 5G and another billion-dollar green bond, this shows an environment where “not only are we trying to expand communication and the infrastructure, but we're trying to do it in a sustainable way.”

Moreover, there is a lot of demand for capacity and there are a lot of people who are also ready to invest in infrastructure. With regards to this, Emmanuel Rochas, CEO of Orange International Carriers, said that those investments have two major enemies from a regulatory point of view: interoperability and volatility.

In Europe, they have national regulators and Rochas stressed that they need to pass a message to all of them that “we need to have a kind of stability in the framework that they give us to invest so that we can invest knowing what will be the end of the business case.”

Agreeing to a one-stop-shop approach, Rochas is fully convinced that there will be no single one-stop-shop in the market tomorrow or in five years’ time. Instead, a number of one-stop-shops must work together on the same basis. “We need to continue to coordinate on the way we implement this digitalization and transformation so that we can go fast enough and avoid creating different customer journeys that do not go hand in hand.”

This is the aim of the APIs and standardization of interfaces that Orange and other players are doing within the industry to fulfill the market and customers’ requirements.