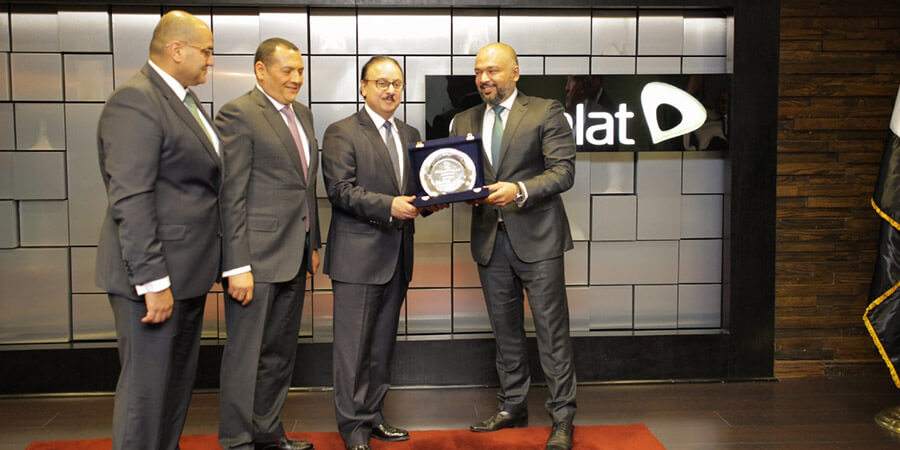 Egypt's Minister of Communications and Information Technology Yasser El Kady hailed Egyptian telecommunications provider Etisalat Misr for its contributions to the country's ICT sector in a meeting with Etisalat Misr CEO Hazem Metwally during a visit to the company's headquarters in April. The Minister paid a number of visits to ICT companies, aiming to underline the state's interest in sponsoring companies and investors in the Egyptian market.

During the visit to Etisalat's Misr's HQ, Minister El Kady hailed the company's presence of over ten years in the Egyptian ICT sector, thanking all the staff and praising the role played by them to develop the company since its establishment. The Minister was briefed on the latest technology used in the efforts to improve the efficiency of Etisalat Misr's network to provide the best services to users.

Etisalat Misr CEO Mr. Metwally thanked the Minister for his efforts in providing Egypt's telecommunications sector with tools that enable companies to offer quality services at improved prices, pointing to the efforts exerted by the ICT Minister and the National Telecom Regulatory Authority (NTRA) to grant mobile operators 4G licenses to provide integrated ICT services after years of waiting.

The NTRA awarded Etisalat Misr and its competitor Vodafone Egypt fifteen-year 4G licenses in October 2016 for US$535.5 million and $335 million, respectively. Orange Egypt reportedly paid $484 million for its license. The operators all launched 4G in September 2017, following delays after refusing to meet a number of the NTRA's license terms, which included paying half the value of the spectrum in US dollars.

Telecom Egypt was the first to secure a 4G license in July 2016, but the country's three foreign-owned operators - Etisalat, Orange and Vodafone - all claimed there was inadequate spectrum on offer. In October, the NTRA announced it had reached agreements on the terms for 4G licenses with all interested operators.

Etisalat Misr's investments in Egypt exceeded 44 billion Egyptian pounds over the last ten years, Mr. Metwally said, and that the company is intensifying its efforts to contribute to covering the major national projects implemented by the state in recent years - especially the new Administrative Capital, as well as the new national road projects. The company succeeded in increasing its capital by 4.5 billion pounds through its investors.