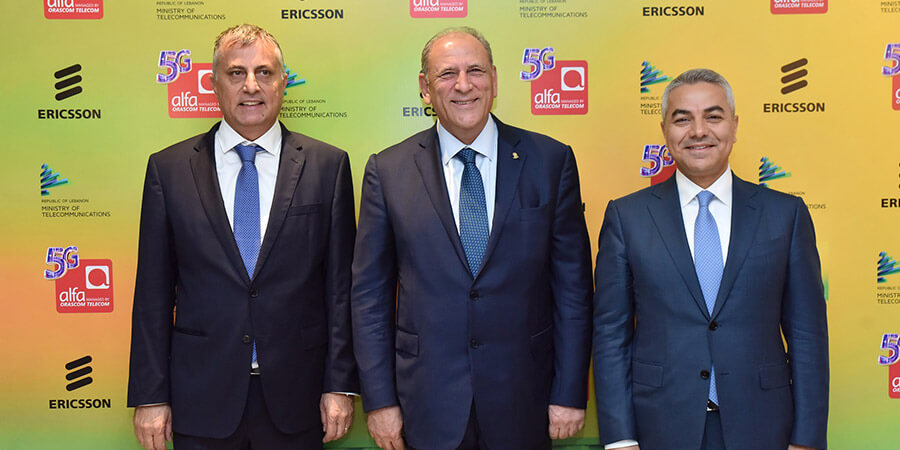 Under the auspices and in the presence of H.E. the Minister of Telecommunications Jamal Jarrah, Alfa, managed by Orascom TMT, and Ericsson launched the first of its kind e-waste recycling initiative in Lebanon. It involved the packing of 460 tons of expired electronic waste such as transmitters and antennas that were stored in Alfa warehouses. This e-waste material was placed in 35 containers and the process of exporting them to Sweden, where they will be recycled according to international standards, has started via the port of Beirut.

The initiative was announced at a press conference attended by Alfa CEO and Chairman Marwan Hayek, Head of Ericsson Levant Mohamad Dergham, officials from the two companies, and social and media figures. The initiative is part of the Alfa 4-Nature program and its commitment to the 2030 United Nations Sustainable Development Plan and is a contribution from Alfa that facilitates finding a solution to the waste crisis through responsible e-waste management.

In his speech, Dergham stressed that "the significance and importance of proper electronic waste recycling cannot be overstated. Without it, the environmental impact can be devastating. E-waste from electronic products poses a great danger to the environment if not properly recycled or disposed". He added: "Our partnership with Alfa in the e-waste agreement aims to raise awareness about this issue and ensure that end-of-life electronics are disposed in an environmentally responsible manner."

As for Hayek, he stressed that "This first and unique event in Lebanon comes in light of the increasing waste crisis and its adverse effects on the environment in general and on human health in particular. Alfa has taken upon itself to be a positive element in society and a source of happiness and is ready to play a positive role in solving any social or environmental problem or to highlight any idea that can help in finding solutions."

"It is true that progress and technological development has positive aspects, but it also has disadvantages and side effects, including addiction to social networks as well as electronic waste." He added, "As you know, Alfa has been operating in Lebanon for the past 24 years, and we have rapidly moved from 2G to 3G (2011), then 4G (2013) followed by 4G + (2016) and soon the 5G, as we were the first operator to launch all these technologies in Lebanon.

Thus, this rapid transformation, resulted in the accumulation of a huge number of non-usable electronic devices in our warehouses, incurring an additional cost to the company due to the need to maintain them. This prompted the idea of ​​recycling this accumulated waste during a meeting with Ericsson senior officers in Sweden. We are confident that this waste will be treated according to the best international standards so as not to be a source of pollution to the environment in Lebanon and the planet, of which we are an integral part."

H.E. Jamal Jarrah commented, "Electronic pollution is one of the most dangerous sources of pollution, especially in light of the constant technological development (3G, 4G and 5G). The Lebanese people have a large consumption rate of electronic equipment compared to the consumption rates in the region, especially among the youth. This Alfa-Ericsson initiative is one of the most important initiatives that we can see in the field of industrial, chemical and electronic pollution disposal. For the first time in Lebanon, there is awareness and attention to this fundamental subject and its treatment, especially since e-waste has an impact on the entire country."

"Some companies dispose of e-waste improperly in dumpsters," Jarrah said. "However, Alfa maintained this equipment in its warehouses until a solution was found to dispose of this material responsibly. While it is true that this represents an expense for the State, it is outweighed by the risk that such equipment and waste can pose to human health in Lebanon. If the material is not properly disposed of, this will implicate costs on the Ministry of Health for the treatment of people suffering from serious diseases, especially cancer." He called all companies that have expired electronic equipment to deal with them in a responsible manner, thus turning this into a general culture in Lebanon. "Countries like Sweden, and others, can help in recycling such materials thanks to their wide expertise in this field."

Jarrah thanked Alfa and Hayek for their belief in the community responsibility and their important and innovative efforts, hoping that "we will form an example for others to do the same and work together to tackle similar issues."