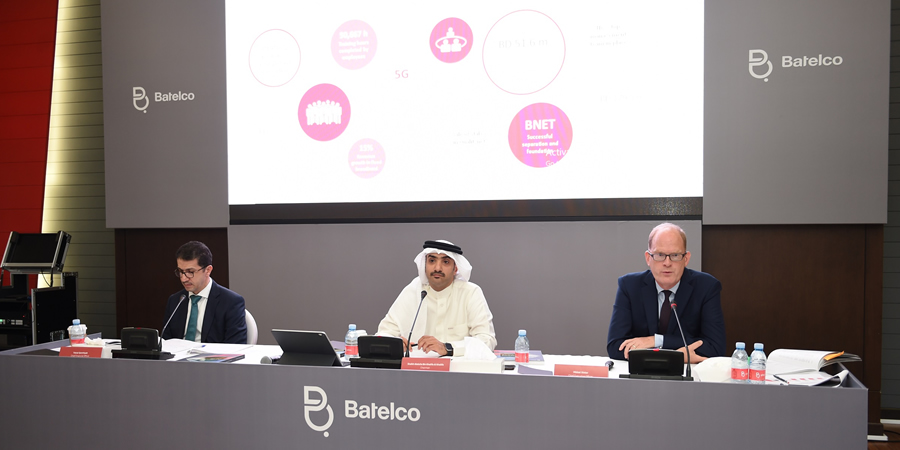 Batelco held its Annual General Meeting (AGM) for the Fiscal Year which ended on 31 December 2019.

The meeting was held at Hamala headquarters, in the presence of the Chairman, Management and Shareholders utilising video conferencing across two locations to limit numbers in any location and encourage social distancing. This was done in compliance with the guidelines for holding general assembly meetings, in accordance with the laws of the Kingdom of Bahrain.

The 40th AGM saw shareholders approve the recommendation of the Board of Directors for a full year cash dividend of BD45.7M (US$121.2M), at a value of 27.5fils per share, of which 10fils per share was already paid during the third quarter of 2019 with the remaining 17.5fils announced during the meeting to be paid in the coming weeks.

The meeting included the appointments and elections of Board Members for the next three year term 2020-2023. Mumtalakat Holding Company appointed four members to the Board, Shaikh Abdulla bin Khalifa Al Khalifa, Mr. Raed Abdulla Fakhri, Mr. Abdulla Abdulhameed Alhammadi, and Mrs. Fatema Ghazi Al-Arayedh. Amber Holdings has appointed two members, Shaikh Ali bin Khalifa Al Khalifa and will announce the name of the other representatives at a later time.

Batelco Chairman Shaikh Abdulla bin Khalifa Al Khalifa said, "We are delighted to announce strong performance for Batelco during the year, which in turn contributed to good dividends for shareholders as part of efforts to continuously deliver improved value for them. Achieving the best financial results for shareholders is Batelco's top priority."

“Revenues for the full year 2019 were BD401.5M (US$1,065.0M), and revenues in the home market of Bahrain have increased by 5% year-over-year boosted by revenues from fixed broadband, data communications and mobile services. 2019 saw EBITDA decrease by 1% in comparison to 2018, impacted by BD11.1M (US$29.4M) voluntary employee retirement programme cost.  Adjusted EBITDA for the year without the voluntary employee retirement cost is 7% higher year-on-year, driven by the 5% YoY reduction in operating expenses.”

“I am pleased to welcome the new Board for the next three year term and look forward to working with them and utilising their expertise and knowledge in helping consolidate Batelco’s position. I would also like to thank the Board members who have served in the previous term for their outstanding contributions in supporting the Company’s plans and development,” he added.

Batelco CEO Mikkel Vinter said, "In 2019, we achieved key milestones to support the Company's digital transformation journey, such as the commercial launch of the 5G network for the first time in Bahrain, an important step in enabling the growth of the digital economy. This year, we plan to further increase the areas of 5G coverage around the Kingdom."

“To position Batelco as the leading provider of innovative digital services and connectivity in Bahrain, we have ambitious plans for 2020. We will be investing in adjacent businesses in Bahrain and the MEA region, focusing on specific clusters of FinTech, B2B solutions, e-government and e-commerce. As a result, this will diversify our revenue streams and create investment opportunities in different digital technologies," he added.

Prior to the conclusion of the meeting, Shaikh Abdulla expressed his sincere appreciation for the outstanding efforts of the Board members, the executive management team and all the Company’s staff members, who contributed to the positive results.

"I would also like to extend my appreciation to our shareholders for their continued support and confidence in our strategic direction," Shaikh Abdulla concluded.