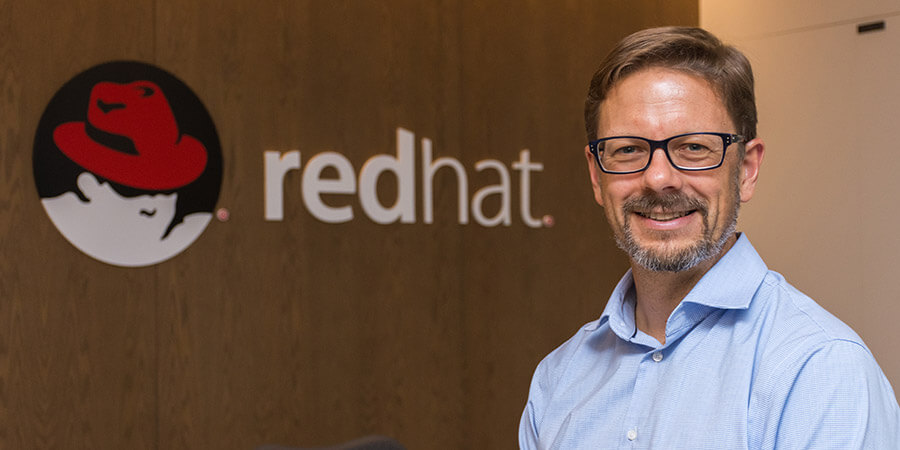 In a very informative interview, Piech, who is responsible for leading the product marketing, program marketing and product management teams responsible for middleware products at Red Hat, including JBoss, explained that open source software solutions are at the core of Red Hat's portfolio that includes as well other types of solutions. He explained how open source adoption has accelerated and why customers should resort to such solutions without having to fear security breaches.

Red Hat is known for providing enterprise grade open source software solutions. Can you give us more details about the company's portfolio and the solutions it offers?
Red Hat offers a wide range of software technologies, so you can think of us as a general enterprise software company with an open source development model. All of our offerings are based on open source upstreams that is why we're mostly known for being an open source company.

However, customers don't buy our offerings just because we are open source. It's about high quality, innovative, dependable enterprise software as well. We are mostly famous for our Red Hat Enterprise Linux operating system - which is where we started - but over the years, we added a wide range of technologies to our portfolio.

Since the acquisition of JBoss by Red Hat in 2006, middleware has contributed to the diversification of the company's portfolio. Since then, we've added a number of different middleware technologies such as in-memory data grid, integration, messaging, data virtualization, API management, business process management and rules engine.

Which type of customers want Red Hat's solutions? Do you consider your target customers to be enterprises or technology vendors?
Many large enterprises across all verticals such as financial services companies, telcos, governments, manufacturing businesses or retail, often see software as a fundamental differentiator. They write custom software in order to outperform their competitors. To that end, they often have in-house development teams within their IT departments. A large share of the middleware that Red Hat offers goes directly to enterprises so that their developers don't have to reinvent wheels, but instead, they can build apps using our middleware.

On the other hand, there are other scenarios where an enterprise will resort to a third party such as a system integrator to build a customer billing system for example. In this case, that third party might use Red Hat middleware to build the application.

A third scenario exists as well with the case of independent software vendors of a standardized billing system for instance. Those types of applications often have middleware components. When they built the product in the first place, they probably used stuff off the shelves and in many cases, they had used our middleware. In that case, it is rare that the end customer would pay us directly. Basically, we would have an embedded model with that independent software vendor that will pay us based on some special terms and then they'll be selling their product with our middleware embedded within it.

How did the adoption rate of open source software solutions evolve throughout the years?
Fifteen years ago, open source was at the fringe however it has become mainstream now. When it comes to Red Hat, it was with Linux that we crossed a threshold. Significant global companies were betting on Red Hat Enterprise Linux, embracing open source and realizing its importance at the enterprise level. Since then, the adoption has been accelerating.

The open source mechanism is self-correcting and self-improving and Red Hat has taken those two characteristics and made them enterprise grade.

With Linux and JBoss, a lot of customers were choosing us over the traditional proprietary vendors for one main reason which is cost. With years, in addition to the financial aspect, customers were buying because the open source world is where the innovation is happening. The open source community innovates and evolves in a much more rapid pace than any in-house development company.

You have touched on the cost and the flexibility of open source. What do you have to say about the security aspect of it?
When you first look at it, you might think that it's very vulnerable to security attacks because everyone can see the source codes which will present opportunities of exploitation. However, even if the software is visible to the "bad guys", it is also visible to the "good guys" who built it in the first place. The main question here is: does the system allow the good guys to stay ahead of the bad guys, minimize security exploitations and rapidly mitigate them.

The open source community is so knowledgeable and rapid to notice when someone finds an exploitable opening that it swoops in and fixes it. This is a classic example of the value that Red Hat adds. In fact, Red Hat's productization process can rapidly drive and consume that fix and dispatches it to its customers which consolidates our customers' trust.

Terms like IoT, AI, and smart cities are trending nowadays. How is Red Hat involved in that area?
IoT solutions involve new types of sensors which bring new sources of data. The kind of data that they generate is quite different than the one that has been dealt with in the past. They have created a big data environment where many sensors are generating huge amounts of data that need to be handled differently. However, a lot of the processing that it takes to take advantage of this data and make it available involves the same technologies that are used to any other type of enterprise application where you still need a database, integration, messaging, rules engine, etc.

Many of the IoT solutions use a much familiar middleware - AMQ messaging, fuse integration and 3scale API management are all used in the back-end of many IoT solutions. The latter have an interim tier called the gateway. In the processing of the data generated by IoT products, there is an intermediate step where the filtering, aggregation and transformation are done before moving the data into a bigger back-end system probably in the cloud. Our middleware and the rest of Red Hat portfolio are very much relevant in that gateway layer because those gateways are more than powerful enough to run the entire Red Hat stack.

In short, the Red Hat portfolio is relevant to almost all IoT solutions and a large part of their footprint. The only part where we don't have a significant role is the area of very tiny sensors with very specialized low level operating systems.

I am amazed at how deeply the concept of digital transformation has penetrated global IT. This isn't only incrementalism, it is leap from an old mentality that considers enterprise software as a supportive, adjunct, ancillary thing on the side, to putting software at the center and considering it as a critical differentiator to business and in some cases, it is the business. That mentality has accelerated the way companies use technology to change what they do.