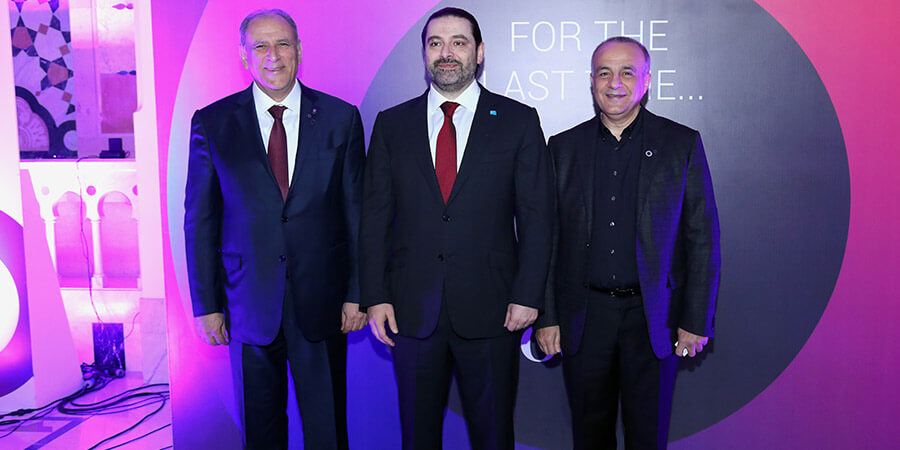 In the framework of the launch of its action plan for 2018 and its new modern vision, Ogero revealed its new logo and slogan "It All Starts Here" which revolves around integrity, innovation, growth, compassion and drive. The ceremony entitled "Ogero's preliminary plan 2018: Goals, achievements and new identity", was held under the patronage of H.E. Saad Hariri, President of the Council of Minister of Lebanon, on February 6th, 2018 at the Grand Serail, Downtown Beirut.

At the opening of the event, a documentary highlighting the accomplishments of Ogero throughout 2017 as well as its plan for 2018 was screened, in which H.E. Michel Aoun, President of the Republic of Lebanon, H.E. Saad Hariri, President of the Council of Ministers, H.E. Jamal Jarrah, Minister of Telecommunications of Lebanon, and Imad Kreidieh, Chairman and Director General of Ogero, shed light on the efforts deployed by Ogero to improve its services and provide faster and better internet connectivity to the Lebanese people.

H.E. Saad Hariri gave the opening keynote at the event and seized the opportunity to laud Ogero's efforts aiming at improving the telecommunications sector in Lebanon. "In the past, we neglected our infrastructure. Today, it is of our duty to change the situation and Lebanon is capable of it. Allow me to congratulate Ogero for all what it did in the past year which I hope will help Lebanon to become a leader in the regional telecommunications scene", he said.

In the same context, H.E. Jamal Jarrah took the stage and highlighted how the Ministry has been cooperating with Ogero to take the telecoms sector to a whole new level. "We have worked to update the network and equipment in a bid to transform the telecommunications sector and pave the way towards establishing a complete FTTH network in the coming years", said H.E. Jamal Jarrah.
"We are also working on creating a new line between Cyprus and Lebanon which is absolutely essential to be able to respond to the ever growing needs of consumers. Our aim is to improve connectivity, provide higher speeds and increase landlines capacity", he added.

Following these two keynotes, another video was screened to showcase Ogero's new slogan that goes in tandem with its plan to improve network quality and infrastructure, launch the FTTH project and improve internet quality and speed across all Lebanese territory, in an attempt to be in conformity with international standards.

Imad Kreidieh, Chairman and Director General of Ogero made an interesting presentation to explain why the company decided to undergo this change and embark on a new journey.  "It all started with a tweet", said Imad Kreidieh. "We want change everywhere, and we want it tomorrow. This tweet inspired us so we decided to embrace change.

"However, we had to overcome several challenges first. We were faced with outdated logical and physical infrastructure which is certainly the foundation of any project we aim to execute, we didn't have a clear roadmap and our team lacked motivation. We faced as well negative customer service feedback which gave a bad perception of our brand. Change was imperative, so we embarked on a promise to ‘Connect the Nation'", he explained.

With a clear vision to digitize everyday life, Ogero had to redefine innovation boundaries and enable growth, said Imad Kreidieh. The company's main mission was to design, implement and maintain a state-of-the-art, reliable, secure and adaptable telecommunication and information technology infrastructure. The first step towards achieving this mission was the launch of a series of open speed days dubbed "Unleash the Speed". During this exercise, a total of 35 Lebanese regions were upgraded for one day, covering a total of 62% of subscribers who contributed through different channels in testing speeds reaching up to 12Mbps.

Unleash the Speed was followed by a series of projects developed in the country to further enhance the sector, notably the VDSL, FTTX and 4.5 G projects. In this framework, Ogero worked on maintaining the existing infrastructure, swapping traditional switches with modern IP telephony, completing the 4.5G network, reinventing the national broadband network, rolling out nationwide fiber plan, increasing international capacity and deploying super computers for educational and business R&D.

During his presentation, the Chairman announced that Ogero is currently rolling out data centers and cloud computing in order to connect sectors and universities. By the first quarter of 2019, Lebanon will have the first data center. He announced as well the launching of Ogero's public Wi-Fi at Rafic Hariri International Airport of Beirut.

"Change is now visible at the level of billing, ticketing, the website, a mobile application, the call center and the points of service. Change only happens inside out, that is why we are building a human enterprise governed by values we live by: integrity, growth, innovation, compassion and drive. Commitment starts here, innovation starts here, hope starts here, It All Starts Here", concluded Imad Kreidieh.