For the past 15 years enterprises experimented with SaaS applications, took advantage of plentiful cheap compute and storage and migrated desktop workloads to the cloud, yet still have not managed to achieve digital transformation. Panelists at the NetEvents session on multi-cloud agreed that we are finally on the brink of a generation change in IT driven by business necessity and enabled by new cloud-native solutions to decades-old problems.

The panel entitled “Making Multi-cloud and Hybrid Cloud Work” and chaired by Brad Casemore, VP Research, Datacenter and Multicloud Networking, IDC, brought together an expert panel comprising two of the biggest names in networking, Cisco and Verizon and two of the industry’s hottest start-ups, Alkira and Aviatrix.

Brad Casemore, VP Research, Datacenter and Multicloud Networking, IDC defines multi-cloud networking as the infrastructure that supports distributed enterprise workloads. “We all know that we've entered, as a result of digital transformation, a cloud era where more and more enterprises are harnessing the cloud for agility, for flexibility, for perceived cost savings. And increasingly, as a result of the pandemic, they're also leveraging cloud for business resilience and continuity,” he said.

But complexity is a major stumbling block for enterprises, whether they’re keen to move to multi-cloud or simply resigned to the inevitability of it. 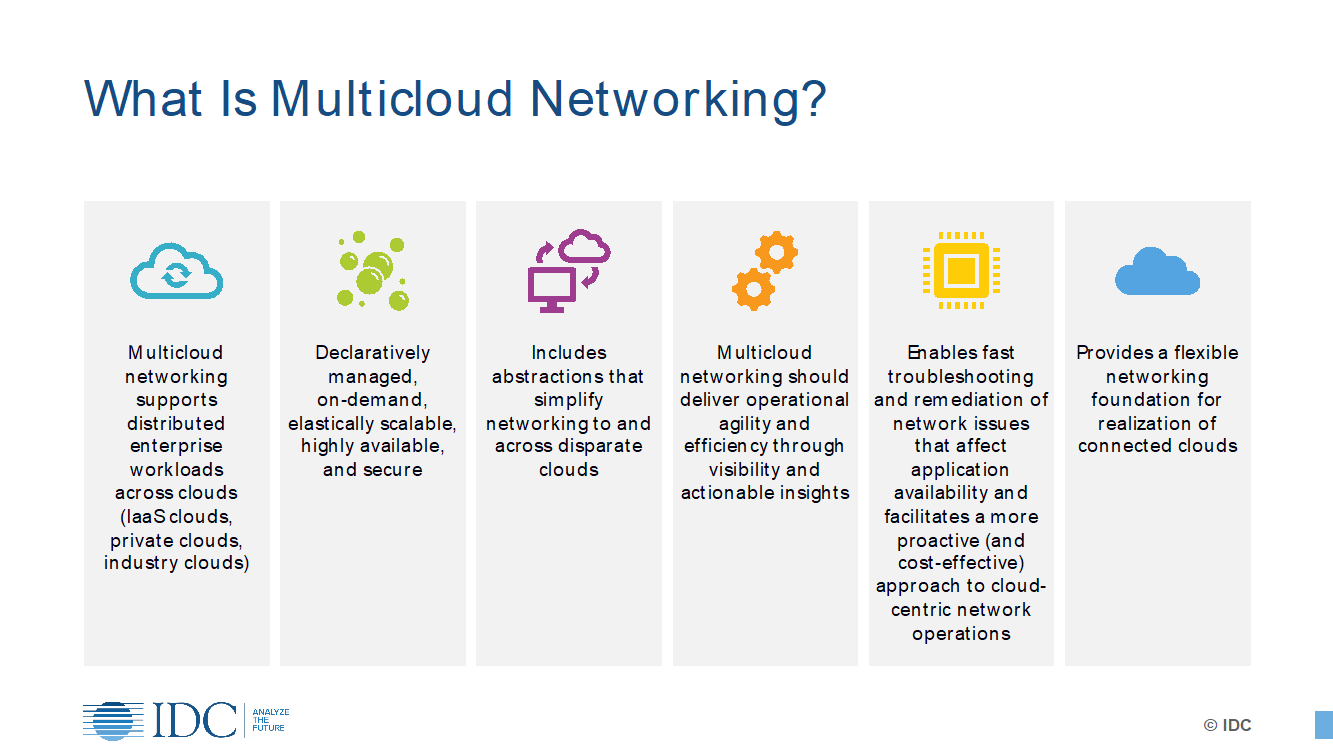 Oliver Cantor, Associate Director of Verizon Global Products observed that the shape of networks is being changed not by technology per se but by new patterns of use – a move from what he calls static to dynamic digitisation. “In the past, you could say that networks connected islands of compute together, LANs and telephone exchanges and other things.  What are they connecting together now? Well workloads, and workloads are moving, data is moving, users are moving, everything's on the move.”

Vijoy Pandey, VP Engineering and CTO at Cisco agreed: “In the end there are applications and there are users and nothing else really matters,” he said. The impact of distributed applications on the role of the network is profound, however. “These big behemoths are being split apart, their guts are being taken out and they’re being strewn across the Internet.”

Amir Khan, President, CEO and co-founder of Alkira, said he started his business because he could see that while the cloud was providing enormous resources and enterprises were keen to push more applications and workloads out of the data centre, “networking was lagging, it had not adapted to the cloud”.

Steve Mullaney, President and CEO of Aviatrix, agreed that even recent networking constructs were under threat from the mass migration of enterprises to the cloud. “SD-WAN is dead. Why? Because it’s not about going back to the data centre, it’s about going to the centres of data that are in the cloud. I can’t take the old world and jam it into the cloud, I need a cloud-native solution. However, I’m like the government. I need the visibility, the security controls that I used to have on-prem,” Mullaney said.

Although the panel agreed on the fundamental importance of cloud networking infrastructure, there was less agreement about exactly how it should be delivered.

Cisco’s Pandey argued that too much emphasis on control to lead enterprises away from a strategic view of IT and back towards an operationally heavy approach. “Control is the harbinger of complexity. The design layer, the policy layer is the right place to provide intent. Anything beyond that drives complexity,” he said.

Verizon’s Cantor cautioned enterprises against taking the DIY freedoms of the cloud too far. Acknowledging the appeal of SaaS and service-based infrastructure, he argued that there was still a place for service providers like Verizon with deep engineering expertise. Whatever magic was performed at the top of the protocol stack, the performance, security and resilience of enterprise networks in the cloud era would still ultimately depend on being able to manage everything from the application at the top to the fibre and bare metal at the bottom of the stack, Cantor said.

Aviatrix’s Mullaney predicted that SaaS would become a “four-letter word” and could even be on the way out, claiming that his company’s customers did not want to buy their network infrastructure as a service. His view is that enterprises want to optimise their own infrastructure and bring in the orchestration skills of vendors such as Aviatrix to provide the management overlay.

Alkira’s Khan disowned the “black box” label for his company’s cloud network as-as-service (CNaaS) offering, which he said allows for deep visibility of the network, granular control of services and complete end to end management.

Challenging the approach of vendors like Aviatrix, Khan said that orchestration solutions would always be one step behind the hyperscale cloud providers in much the same way that the third-party network management solutions of the past were always playing catch-up with the big network vendors. “That’s why we took the approach of building our own infrastructure in the public cloud so that we didn’t have to rely on ten different cloud providers to bring out a feature before we could offer it,” he said.