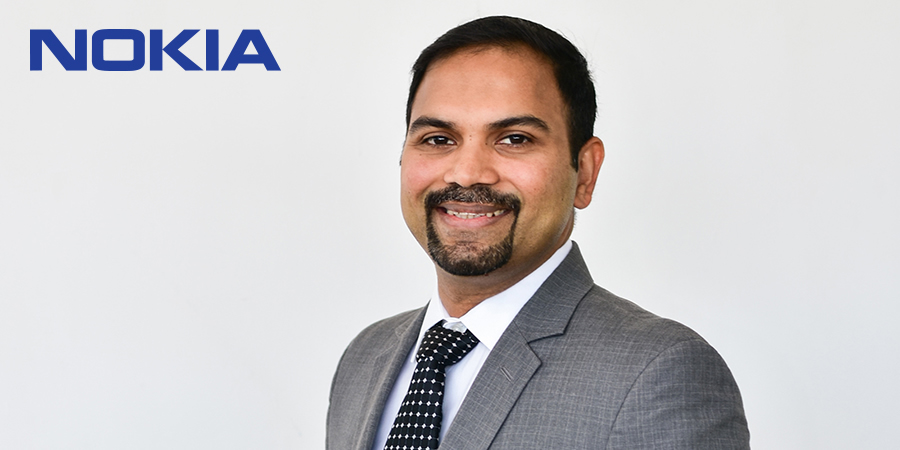 Telecom Review caught up with Aji Ed, head of technology, mobile networks, Nokia who explained in details about the new generation of AirScale radio, massive MIMO antenna and baseband products that Nokia had recently launched. He also highlighted their relevance for the Middle East and Africa region.

Nokia’s constant efforts on innovation led to the recent launch of a new generation of AirScale radio, massive MIMO antenna and baseband products. Can you give us some details on the products launched?

The first networks became commercial only two years ago. We are still in the early phase of the 5G cycle. Over the next three years, the 5G market will triple in EMEA (+281%), double in APAC (+190%), and North America continues to grow by half (156%) over the same period. Another important thing to notice is that we expect the peak of the 5G cycle to be extended and longer than it was in 4G. The reason for this is that the first phase of 5G is mostly about mobile broadband, but the second, overlapping phase comes with great Internet of Things capabilities (IoT) with ultra-reliability, low latency and extreme IoT connectivity.

We launched the below products to help our customers cope with increasing 5G capacity and spectrum demands:

What are the unique technical capabilities of the newly launched AirScale products and how are they helping the operators in this region?

The new AirScale solution help global mobile operators scale up their network capacity for 5G (and 2G, 3G, 4G) – flexibly, efficiently and at a reduced TCO.

The newly launched 32TRX massive MIMO radio is with 17 kg and this is the industry’s lightest 32TRX massive MIMO antenna. Importantly, our new AirScale 32TRX massive MIMO antenna offers 400 MHz instantaneous bandwidth in a compact 17 kg design; and this combination makes it industry leading. Other vendors’ solutions offer higher weights (19 kg) but only support 200 MHz. In many cases, 32TRX mMIMO antennas offer the best balance of performance, size/weight and total cost of ownership – the sweet spot. There are more parameters than the number of transceivers and the weight: occupied and instantaneous bandwidth, RF output power, form factor and ease of deployment, as well as compliance with national regulations, to name a few.

High instantaneous bandwidth is required to support non-contiguous spectrum - fragmented spectrum and the increasing number of 5G network sharing cases. This is very important for Middle East and Africa market.

Non-contiguous spectrum can occur for instance when an operator starts network operation with a given block of spectrum within a band and subsequently secures additional spectrum, usually via a spectrum auction.  In this case, as long as the two separate spectrum blocks fall within the RF bandwidth of the antenna then the operator can continue to use the same antenna and not have to deploy another, eliminating the associated effort and costs.

Network (RAN) sharing cases is another example.  Now that the early adopters of 5G have rolled out their networks, we’re seeing a new wave of market entrants who are increasingly considering network sharing to lower costs and speed-up network rollout, especially in areas where the return on investment might not be favorable. One of the fundamental aims of network sharing is to lower costs by sharing the hardware. As the new mMIMO platforms support high bandwidth, this enables both operators to use a split-mode configuration single antenna. This obviously reduces the site footprint, wind load, cabling, installation effort, energy consumption and ultimately delivers the desired lower costs.

New AirScale baseband plug-in cards provide up to 3x the capacity of the previous generation and enable power consumption reductions of up to 75%. We increase the number of connected cells up to 8x (depending on configurations). We have plug-in cards that support 2G, 3G, 4G and 5G. Our new capacity plug-in cards are optimized for 4G and 5G traffic, the area in which most of today’s and all of near future’s traffic growth will happen.

All of these are powered by Nokia ReefShark SoC.

Why is ReefShark SoC highly efficient? How is it progressing?

The use of our ReefShark custom silicon improves base station capacity and connectivity and reduces product cost and power consumption. The way this works is that we develop some of the IP blocks for the chips, our partners develop other IP blocks, and then the partners package our IP, their IP and 3rd party IP like ARM cores into a ReefShark System-on-Chip.

We have integrated ReefShark SoCs for all base station computing functions, both in baseband and radio, including Massive MIMO with beamforming. The share of ReefShark based products is constantly increasing, so that at the end of this year (2021), far fewer configurations will still rely on FPGA as opposed to SoC. In 2022, the transition will be complete. And we have already the next generation SoC’s in the works, in addition to the ones we have already.

How do you see the relevance of these new AirScale products in Middle East and Africa market?

Middle East and Africa is a diverse market in terms of technology adoption. The majority of Middle Eastern countries have deployed 5G already and now they are in the phase of expanding 5G with additional spectrum and more dense urban deployments. Also, in Africa, many operators have now started deploying 5G. There are several discussions on network sharing scenarios.

This is exactly where the new AirScale radio products would help with more instantaneous bandwidths (e.g, 400 MHz) to cover even non-contiguous spectrum scenarios. We can offer the right mix of 8TRX, 32TRX and 64TRX radios different types of deployment scenarios. Similarly, Airscale baseband plug-in card offers very high capacity for both 4G and 5G which is just the right time for 5G capacity expansions.