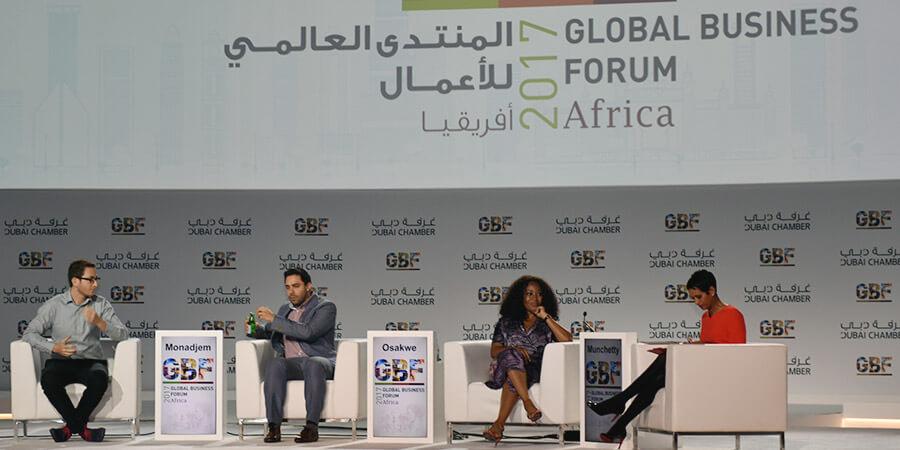 Under the patronage of His Highness Sheikh Mohammed Bin Rashid Al Maktoum, Vice President and Prime Minister of the UAE and Ruler of Dubai, Dubai Chamber of Commerce & Industry organized the Africa Global Business Forum (AGBF) on November 1 and 2, gathering high-level government officials and business leaders from across the African continent to convene at Madinat Jumeirah. Chairman of Dubai Chamber of Commerce & Industry, HE Majid Saif Al Ghurair, said Africa's tech-savvy entrepreneurs will bring "positive change and usher in a new era of economic and social progress."

The event welcomed influential leaders including the President of Rwanda and the CEO of Standard Bank Group. HE Al Ghurair said he was honored to organize the forum "This is the largest event of its kind to be held outside of Africa," he said. "It supports the Chamber's strategy of exploring markets around the world. It also provides an ideal opportunity to bring all key public and private stakeholders together to network and exchange valuable insight."

The theme of AGBF 2017 was "Next-Generation Africa", reflecting Africa's young and fast-growing population along with its rising middle class full of potential. "The continent is experiencing an infrastructure boom," HE Al Ghurair added, "which will create plenty of trade and investment opportunities. That being said, the continent is not without its challenges."

Over the last few years, he said, Dubai has strengthened its position as a global gateway for African companies, and the UAE will "continue to lead the GCC in foreign investment into Africa." The number of companies registering with the Dubai Chamber has grown to exceed 17,000 up 41 percent compared to the last time the forum was hosted in 2015.

"This remarkable growth," he said, "reflects Dubai's strong commitment to forging mutual benefits with key stakeholders from the African public and private sectors. Dubai is keen to use its strategic location and status as a thriving business hub to contribute toward future African growth."

Sangu Delle, CEO of Golden Palm Investments in Ghana, praised the UAE government for its appointment of a Minister for Artificial Intelligence (AI) and its vision to have driverless cars. Delle noted how a third of attendees at the event were young entrepreneurs which highlighted the importance of the conference's focus on the role Africa's young entrepreneurs play in resolving obstacles to trade, investment and prosperity.

How to make it in Africa
Many of the presentations that took place at the event focused on the challenges of conducting business in Africa and the importance of establishing open dialogue between government officials and business leaders. Youth entrepreneurship was a major topic of discussion at the event, highlighted by a panel of entrepreneurs who shared their views on what it takes to be an entrepreneur in Africa.

The first panel discussion focused on whether technology and entrepreneurship is enough to unleash Africa's economic potential, or if companies need more support of policy, infrastructure and foreign investment to succeed in the long term.

The panel included Jeremy Hodara, co-founder and co-CEO of Jumia Group, an online e-commerce comany; Vahid Monadjem, CEO of Nomanini, a Cape Town-company that provides technology for distribution of pre-paid services;  and Ada Osakwe, founder and CEO of Agrolay Ventures, a private investment firm dedicated to growing the agriculture and food sectors in Africa.
The panelists discussed whether it's possible for aspiring entrepreneurs to leapfrog and get ahead in Africa, and whether technology and innovation are enough to facilitate it, or if governments should play a bigger role in setting policies to help entrepreneurship.

Vahid said there is a strong narrative pushing for entrepreneurship in Africa, but the reality is that the markets in the continent are very diverse and face very different challenges which can often make it difficult to build a new business.

"There is a need to create the environment that will enable entrepreneurs to thrive," he said. "Entrepreneurship seems to be the cure for everything in Africa, but entrepreneurs are unlikely to be the ones building roads and the ones who are going to be figuring out the full extent of public services that are needed for businesses to succeed."

There certainly isn't a demand problem in Africa, said Jeremy. The problem, he said, is that the distribution infrastructure is not good enough. "Technology is the solution for supplying that demand," Jeremy added.

"People need to buy products and services so they will find a way to get hold of those things, perhaps differently than the rest of the world. That's why we believe the internet and e-commerce is a great opportunity for people to fulfill their needs in a way that is more efficient," he said.

This also removes the need for physical stores. Entrepreneurs have the opportunity to make the most of this new platform for business.

Ada agreed with Jeremy with regards to technology being an enabler for entrepreneurs, but she highlighted the fact that there are still fundamental issues facing Africa that wouldn't even allow technology to thrive. For example, if an African nation doesn't have sufficient electricity then technology cannot be used as a solution.

"We are using technology to help accelerate business," she said, emphasizing how technology can only be a solution if it is both affordable and accessible.

Vahid said identifying ways to help businesses in Africa isn't the problem but rather finding solutions to those issues. He reflected on how at one point his business was excelling in Mozambique, but all of a sudden the country's economy stumbled, and the currency plummeted over the course of a few months.

Sustaining a payments business under those conditions is "extraordinarily difficult," he said, underlining the importance of a stable business environment. Ada agreed with Vahid, saying governments need to do more to create policies that make conducting business easy for emerging companies.

"I know the power of policy in driving the economy," she said, reflecting on her time working in government. "If we say entrepreneurs are the future for Africa, then we need to create the environment for that and have the right polices in place to drive that. I just don't see that happening quickly enough."