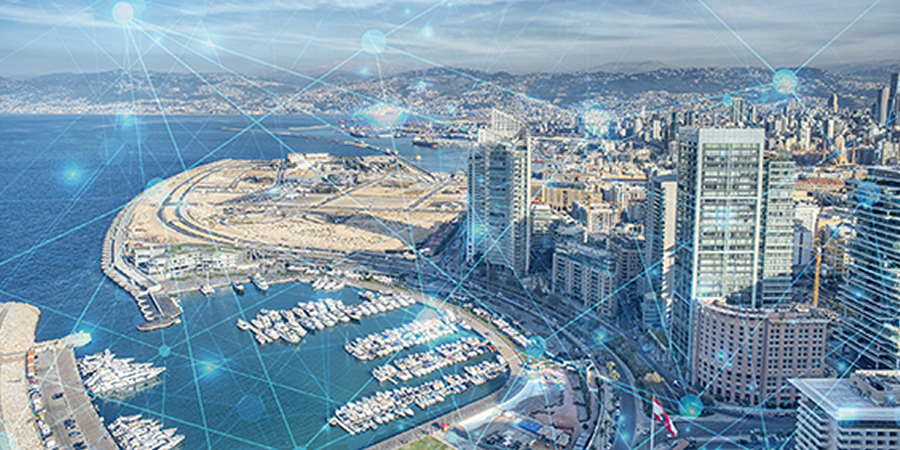 Lebanon has seen in the past couple of years its telecommunications sector take a giant leap forward which was translated on the ground with technological and ICT achievements. The Lebanese Ministry of Telecommunications has committed to transforming the sector through the improvement of telecoms infrastructure and investment in ICT, and was able to honor a great part of its commitments.

In a biennial report, the Ministry of Telecommunications shed light on the most important achievements and milestones that have contributed to transforming the country’s telecommunications services and played a significant role in fostering innovation and cutting-edge technologies.

H.E. Jamal Jarrah, Minister of Telecommunications of Lebanon, has undertaken reforms at the ministry the minute he assumed his role and has overseen the implementation of projects covering the fixed and mobile segments and the ICT industry in general, including infrastructure-based investments and business and operating support systems.

“We started with these initiatives aiming, on the long term, to expedite the much needed telecommunication services expected by our citizens, the industry and the government, sustain growth in the ICT sector and attract international companies to invest in Lebanon, leading to a stimulus in job creation and placing Lebanon among its peers in the region and worldwide,” said H.E. Jamal Jarrah in the report issued by the Ministry to review the achievements made in 2017 and 2018.

Cooperation between the Ministry and its telecommunications arm bears fruit

The Ministry has worked closely with Ogero, its telecommunications arm, on several projects, focused mainly on infrastructure improvement, among others. The Ministry of Telecommunications has entered into contracts with suppliers and contractors chosen according to a tendering process, in order to expand and modernize the copper and fiber infrastructure in the country, thus paving the way to nationwide FTTH deployment which is what Ogero is aspiring to reach.

Ogero has been deploying tireless efforts to provide high speed internet services in collaboration with the Ministry of Telecommunications. In fact, through its broadband internet services project initiated in 2017, Ogero has been able to guarantee broadband dedicated services to corporate customers, SMEs, universities, schools, licensed digital service providers and internet service providers. Using traditional copper, this service is provided by deploying multi-service access nodes (MSAN) connected by fiber to the central office on one side and utilizing the existing copper infrastructure at the building to the customer premise.

In 2017, Ogero customers started to benefit from a cloud-based IP-Multimedia Subsystem (IMS) that offered additional services such as VoIP, messaging services, voice and video conferencing services and PBX type services on the same platform. The IMS system replaced the end-of-life central office TDM switches and aimed to cover the back-log of demand for existing and new services.

In order to connect the central offices and provide the international internet capacity needed to address the increased demand for internet and data, Ogero had undertaken a Dense Wavelength Division Multiplexing (DWDM) expansion and replacement in central offices across various regions in Lebanon. The deployment of an end-to-end DWDM system was completed in 2017 for the international and domestic fiber routes.

The Ministry of Telecommunications has been preoccupied in the last two years with increasing international capacity, that is why it has improved the terms of the contract signed with Cypriot company CYTA to secure international capacity via the Alexandros Cable and increase it from 60 Gbps to 600 Gbps in the first phase and to twice this capacity within months depending on the availability of the necessary technologies.

In cooperation with CYTA, the Ministry has also begun studying the construction of a new submarine cable between Lebanon and Cyprus to replace the existing cable CADMOS.

In 2018, the Ministry of Telecommunications announced it’s planning to launch a datacenter project for the government, private sector and international companies to benefit from hosting and to provide ICT services nationally and throughout the region.

The Ministry of Telecommunications has collaborated with Lebanon’s mobile operator Alfa, managed by Orascom TMT and touch, part of Zain Group, to improve subscribers’ experiences. The first step was the reduction of mobile broadband prices by an average of 12% for data packages. Additional discounts reaching 25% were introduced with the expansion of 4G coverage and the increase of data usage.

A major achievement made in 2018 was the launch of the 5G technology by both mobile operators. 5G was introduced for the first time in Lebanon which has put the country among the countries who have been pioneers in the 5G journey. MoUs will be signed with the vendors for 5G trials in Lebanon as soon as the technology is available.

In an effort to promote innovation and value creation in the field of telecommunications, the Lebanese Ministry of Telecommunications announced in 2018 the launch of MIC Ventures Holding SAL where the two mobile operators have committed to invest into the MIC Ventures Fund. The main objective of this project is to provide companies and entrepreneurs with the required business support and global reach and transform startups into profitable businesses allowing for trade sales, mergers and even acquisition by the operators.

Both mobile operators have also launched in the past two years special offers and packages for students, armed forces, people with special needs and tourists in order to support them and address their needs.

An important measure was taken by the Ministry in 2018 to relaunch the mobile identity registration system (MIRS) which was implemented in 2013. This step aims to halt the illegal import of mobile phones and devices that causes an annual loss in customs revenue of almost 40 million dollars. This system authorizes only mobile phones and devices with paid customs tariffs to operate using the Lebanese network by identifying the authentic IMEI which are allowed to have access to the mobile network.

The Ministry has implemented state-of-the-art fixed and mobile stations to monitor the use of spectrum which enables it to ensure the proper and legal use of spectrum and related frequencies to licensed entities and resolve interference issues.

In 2017 and 2018, important corporate social responsibility initiatives and projects were initiated and supported by the Ministry of Telecommunications as part of the sector’s contribution to boosting the country’s ICT industry.

University students in the telecommunications and ICT fields were able to benefit from a great support and get international exposure by travelling abroad and taking part in trainings and competitions. In 2017, a team of five talented Lebanese students was selected to join the “Seeds for the Future” program along with teams from 80 other countries and was distinguished at the closing ceremony as the best performing team. In the same context, three top students participated in the “ICT Skill Competition” and won the first prize for the Middle East Level Competition in 2017 and then won the third prize globally in 2018. Furthermore, Lebanese “Robobuilders” team won the Lebanese Robotics Champions Award and represented Lebanon at the Robotics World Festival in Huston, Texas, and was selected among the top 10 performing teams.

As part of its CSR, the Ministry has also supported local NGOs with the cooperation of Alfa and touch that have launched throughout the two years many initiatives aiming at helping others who are in need and improving people’s lives.

In 2018, a Lebanese pavilion was created at the Mobile World Congress thanks to the efforts of the Ministry of Telecommunications and Ogero to support Lebanese companies and give them international exposure.

This biennial review has shown that 2017 and 2018 marked the Lebanese telecommunications with great achievements and proved that with dedication, commitment and effort, Lebanon can lead other countries in the region.