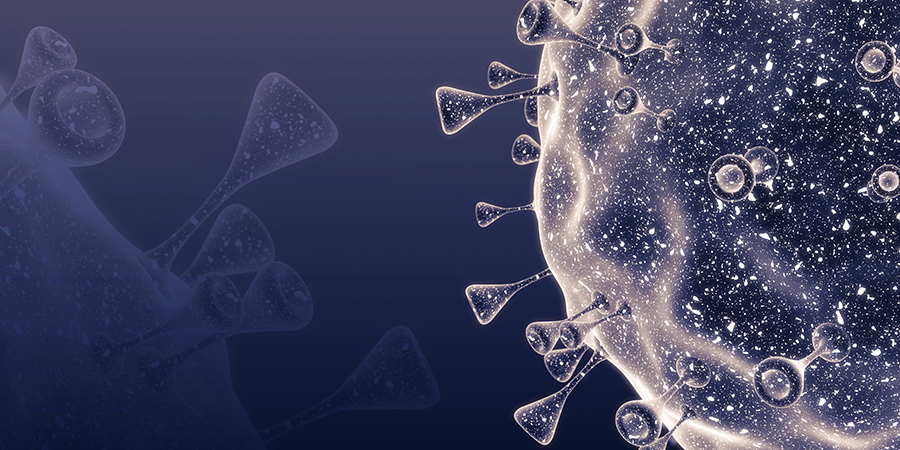 Coronavirus (COVID-19) has hit a great number of countries and turned out to be even worse than the critical economic, strategic and political clashes happening around the world. The coronavirus outbreak has and still is impacting all industries, including the information and communication technologies sector. Tech giants have halted operations, cancelled their participation in important events and conferences and announced financial objectives below expectations.

Even though China has been mostly affected by the disease, its spread to the whole world is compromising economies. The most chocking consequence of COVID-19 in the ICT industry was the cancellation of the Mobile World Congress which was supposed to be held in Barcelona on February 24-27.

Technology and ICT firms anticipate the international show and plan to launch new services, products and solutions there to get the biggest exposure. It is also an important highlight of the mobile industry calendar because companies seize the gravity of the show to meet new clients and seal new deals and partnerships.

In addition, the GSMA, in conjunction with the event host MTN GlobalConnect, decided to postpone the April 2020 WAS meeting in Cape Town to the same venue in March 2021.

The Wholesale Agreements and Solutions Group (WAS) is responsible for operator-to-operator and operator-to-hub interoperability (including interworking and roaming) to provide GSMA members with a consistent, reliable GSM service for members to offer their customers.

Another major ICT event was cancelled in Dubai, Capacity Middle East, which was due to commence on March 2. “This decision has not been taken lightly, but the health of our customers, partners and team is of paramount importance. We feel that as such an important event to the region, its postponement will allow the event to better serve its purpose,” a statement by Ros Irving, CEO of Capacity Media, read.

The cancellation of international events for fear of coronavirus translates into more direct and indirect financial losses to thousands of technology companies. In fact, most recently, Microsoft lowered its revenue estimates for the current quarter, saying it will feel the impact of the coronavirus epidemic with lower sales of Windows software and Surface devices.

The US tech giant became the latest global firm to warn of a financial hit from the global outbreak of the disease which has killed thousands worldwide.
“Although we see strong Windows demand in line with our expectations, the supply chain is returning to normal operations at a slower pace than anticipated,” Microsoft said in a statement.

As a result, Microsoft said that in the current fiscal quarter its revenues will fall short of earlier forecasts, with Windows and Surface “more negatively impacted than previously anticipated.”

Licensing Windows software to computer makers is a major source of revenue for Microsoft, meaning temporary closures or interruptions of production at factories run by partners can cobble its revenue. Surface tablet manufacturing can be directly impeded by such precautions.

“As the conditions evolve, Microsoft will act to ensure the health and safety of our employees, customers and partners during this difficult period,” Microsoft said. “Microsoft also continues to make donations to relief and containment efforts, including directly providing technology to help hospitals and medical workers.”

Apple had also said earlier that its revenue for the current quarter would be below forecast, and that worldwide iPhone supply “will be temporarily constrained” because of the global virus outbreak, notably in China, where Apple manufactures most of its devices. Apple, which depends on components from Chinese suppliers and has a big market in China, has been hammered on both fronts.

The coronavirus will have a greater impact on China's ICT market, compared to the Chinese economy overall – an impact even bigger than the SARS virus outbreak in Asia in 2003. However, IDC predicts that the impact will gradually fade as of the second quarter of the year and will have a very limited impact on the full year.

“The digital economy enabled by ICT accounted for 37.8% of the Chinese economy in 2019,” said Kitty Fok, managing director of IDC China, in a statement. “The macroeconomic disruption brought by the outbreak is expected to significantly affect China’s ICT market and drag it down by approximately 10% in the first quarter of 2020.” Of the 10% ICT decline in the first quarter, IDC said there would be at least a 30% fall for PC and smartphone sales, and a greater than 15% decline for server, network and storage sales.

Artificial intelligence and big data would also be affected by the virus, but will “remain to grow” for the year. IDC said that emerging technologies, such as IoT and security, would experience “minimal declines.” Overall, IDC predicts a 5.5% growth rate for the China ICT market this year. 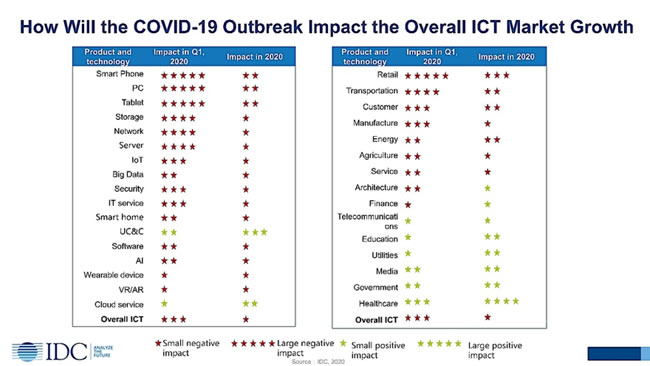 Even though the ICT sector has had its share of COVID-19, it’s been contributing the most in the fight against it. Since the spread of SARS in 2003, the viral disease prevention and elimination approach has changed tremendously. Technology nowadays plays the most important part. In the case of COVID-19, facial recognition is a key player.

New temperature analysis systems have been installed in airports and metro stations to detect potential cases. In China, Megvii, which specializes in facial recognition technology, has created a detection system equipped with 16 classic and infrared cameras that can detect high temperatures at a range of three meters even if the person’s face is covered and is in a crowd. This system can scans 15 people per second and requires less surveillance teams, thus decreasing transmission risks.

Chinese giant, Baidu, has also offered a similar detection system to measure people’s temperature with an error range of 0.05 °C thanks to infrared sensors and face recognition technology.

In addition to the detection systems, China has deployed drones to fight coronavirus. Such drones are equipped with thermal cameras that detect people carrying the virus. Those drones regularly patrol the streets to constantly remind people to wear masks or to go home and wash their hands. They’re also used instead of specialized personnel to spray disinfecting products in public places, which reduce people getting exposed to potentially contaminated zones.

As the new coronavirus spreads globally, the online battle to keep misinformation about the disease is also stepping up. Google, Facebook and other platforms are struggling to keep ahead of scammers, trolls and others with ill intent that routinely use major tragedies or disasters as opportunities to swindle or manipulate people.

Internet companies took part in a meeting with the World Health Organization at Facebook offices in Silicon Valley to discuss tactics such as promoting reliable information and fact-checking dubious claims about the coronavirus, referred to as COVID-19.

“(We must) combat the spread of rumors and misinformation” WHO director general Tedros Adhanom Ghebreyesus said. “To that end, we have worked with Google to make sure people searching for information about coronavirus see WHO information at the top of their search results.”

Google search ranks authoritative sources higher when people are seeking information on health and labels results or news stories that have been fact-checked. Ghebreyesus said that social media platforms including Twitter, Facebook, Tencent and TikTok have also taken steps to limit the spread of misinformation about coronavirus.

Facebook said in a recent online post that it is focusing on claims which, if relied on, could increase the likelihood of someone getting sick or not getting proper treatment.

“This includes claims related to false cures or prevention methods - like drinking bleach cures the coronavirus - or claims that create confusion about health resources that are available,” Facebook head of health, Kang-Xing Jin, said in the post. “We will also block or restrict hashtags used to spread misinformation on Instagram, and are conducting proactive sweeps to find and remove as much of this content as we can.”

University of Washington biology professor Carl Bergstrom said some virus misinformation is “people trying to sell snake oil products” such as bogus cures or treatments, while others use attention-grabbing deceptions to drive online traffic that yields money from advertising. Misinformation is also spread by “actors” out to fuel distrust for the establishment in China or foment societal instability overall, according to Bergstrom.

“There's appetite for up-to-date, real-time information,” said Jevin West, co-author of a book on misinformation with Bergstrom. “These actors can take advantage of that; things with crazier scenarios are more likely to be clicked on than the report from that doctor at WHO trying to calm down the fears.”

Google-owned video sharing platform YouTube has been modifying policies and products for several years to remove harmful content and give priority to authoritative content deemed trustworthy.

“We currently do not allow content promoting dangerous remedies or cures, like videos which claim that harmful substances or treatments can have health benefits,” YouTube said.

Last year YouTube began providing links to reliable information along with videos on “subjects prone to misinformation,” and added coronavirus to that list.

Social media giants have also beefed up ranks of fact-checkers, hiring outside parties such as AFP News Wire, to sort truth from fiction, even if there are questions on their effectiveness.

A recent study published in the journal Science Advances suggested fact-checking did little to stem the tide of misinformation about other epidemics such as Zika, Ebola and yellow fever.

The researchers said that “current approaches to combating misinformation and conspiracy theories about disease epidemics and outbreaks may be ineffective or even counterproductive,” and could even cause collateral damage by undermining trust in fact-based disease information.

Bergstrom and West questioned whether social media giants optimized for virality could stem the tide of disinformation and deceit.

The world has never been more interconnected and this health crisis doesn’t affect China alone but the whole world. The ICT industry and many other sectors are already losing a lot of income opportunities and it’s still uncertain when will the situation be contained.

However, the ICT industry is leveraging the situation and can actually compensate the direct losses in indirect ways. Leading companies having a presence in China are striving to continue with business as usual. Employees have been asked to work from home. Amidst the scenario, with organizations promoting working remotely, there is expected to be an exponential rise in video calls/phone calls, as an increasing number of people will be organizing client meetings and internal team briefings via apps or collaborations platforms.

Sunil Kumar Verma, lead ICT analyst at GlobalData, commented, “The outbreak of coronavirus in China offers a unique opportunity for vendors offering communications and collaboration services. However, organizations need to continue to collaborate to remain productive.”

GlobalData estimates the overall communications and collaboration spending in China to be approximately US$40.8bn in 2020. Of this, ‘services’ are estimated to account for 91%, whereas software/applications are forecast to account for 8%. This can significantly go up, depending on how long the outbreak continues.

Verma continues, “The overall data traffic on the telco’s network is expected to surge exponentially, as companies will interact virtually with their counterparts in the outbreak affected regions. A large section of these people will be discussing on videochat apps or other productivity software/platforms like WeChat, Skype and Zoom.”

“Despite the challenges of the outbreak, the current situation offers a mutually beneficial scenario for both the vendors as well as potential clients under a real-world use-case scenario, until the coronavirus outbreak is brought under control.”