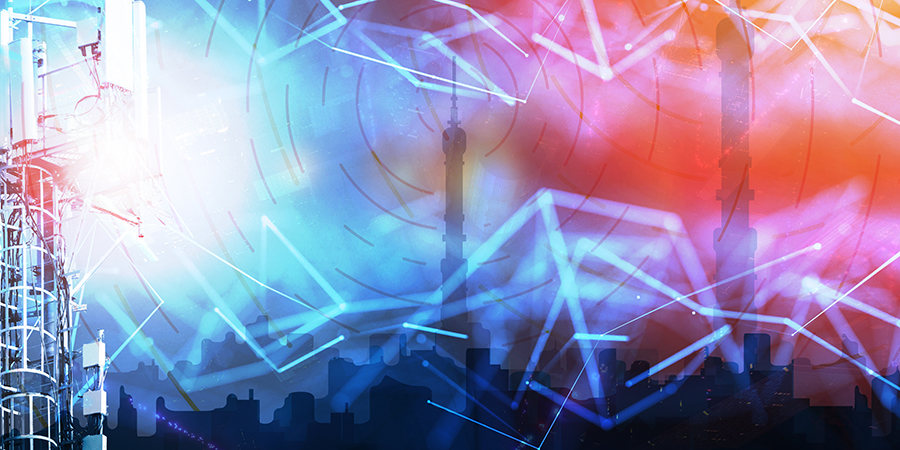 Carrying information wirelessly is a task being done tirelessly in this modern era. With services ranging from television, mobile, broadcasting, satellite, and other communication systems, the demand for adequate radio spectrum allocation is needed.

With an ever-increasing flow of data and the necessity for faster, stable, and high-quality connections, it is important to know the importance of the radio spectrum and how its different frequency bands are used and divided among nations. As radio spectrum is a scarce and natural resource unlike wired networks where additional cables can increase bandwidth, it has limitations that should be addressed logically.

This makes spectrum management a vital job for governments around the world. When the frequencies are made available in a fair and reasonable manner, the social and economic benefits that they provide can be enjoyed for the long haul.

Different spectrum bands
Spectrum bands have different characteristics that make them suitable for different purposes. In general, low-frequency transmissions can travel greater distances before losing their integrity and they can pass through dense objects more easily, but fewer data can be transmitted over these radio waves. On the other hand, higher-frequency transmissions carry more data but have a hard time penetrating obstacles.

Therefore, national regulatory authorities such as the ITU, FCC, CITC, and TDRA, have a big responsibility to allocate and license appropriate resources to the services and sectors that can maximize its access. 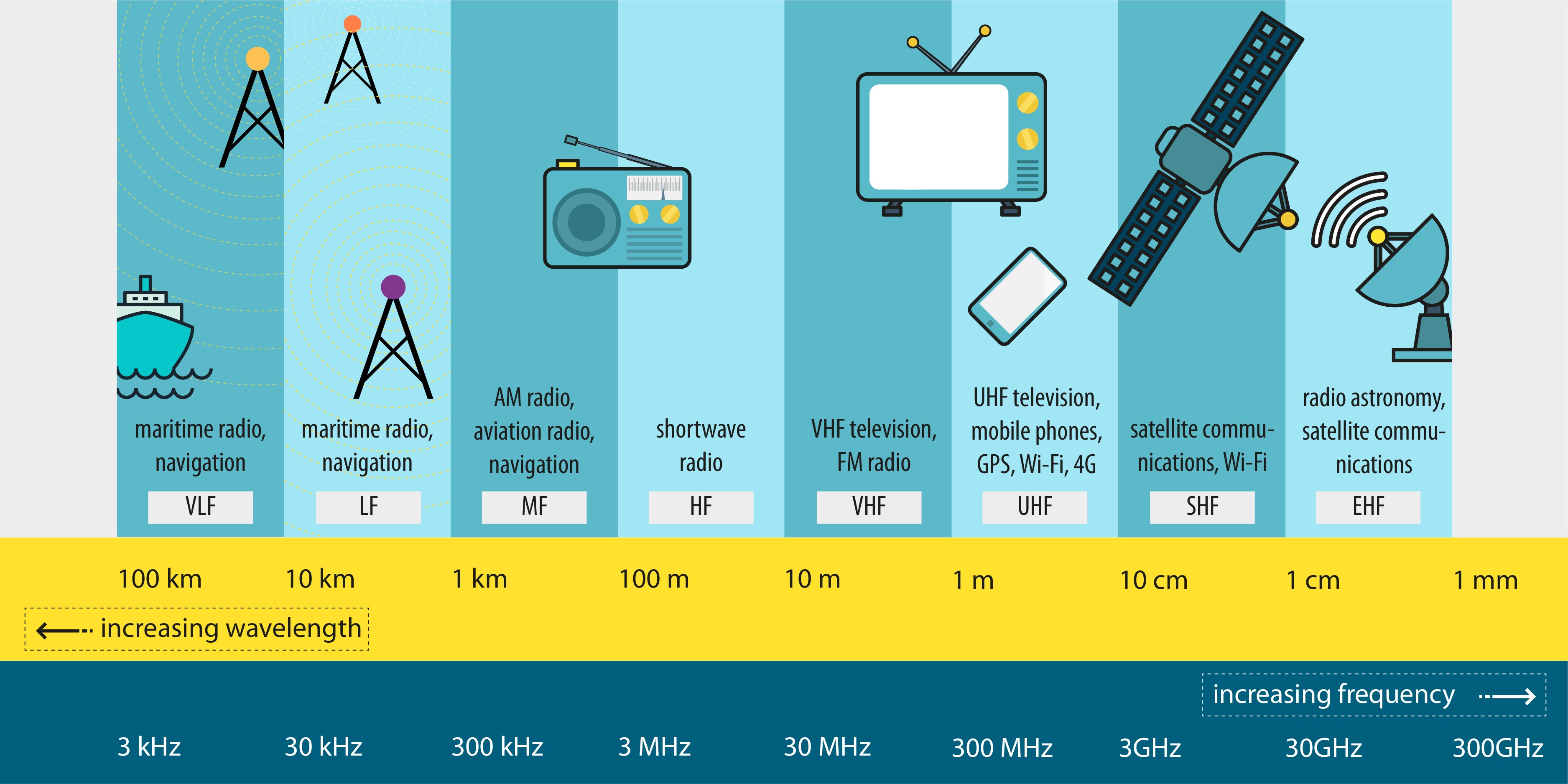 Again, let’s keep in mind that longer wavelengths travel further but carry less information while shorter wavelengths have shorter ranges but can carry more information. Very low frequency (VLF) is the starting range of radiofrequency (RF), spanning from 3 KHz to 30 KHz. With its ability to transmit signals in between far and remote locations, it has been used in maritime operations, submarines, and navigation. Low frequency (LF), generally called ground waves, has the range of 30 KHz to 300 KHz that is suitable for long-distance communication due to its long wavelength and ability to withstand big terrains like mountains.

Medium frequency (MF) has been popular in wireless radio transmission since the early 19th century. Operating between 300 KHz to 3 MHz, it has been widely used in AM radio transmission as well as emergency distress signals. Due to its low frequency, the quality of the sound is not that good. Known as the short wave, high frequency (HF) signals range from 3 MHz up to 30 MHz. These are mostly used by the aviation industry, weather broadcasting stations, and near-field communication (NFC).

As they introduced television broadcasting and FM radio, very high frequency (VHF) bands — 30 MHz to 300 MHz — have been used. Though suitable for short-distance communication, the signal quality and strength have improved. Furthermore, with more evident technologies such as GPS, Wi-Fi, mobile phones, and LTE mobile transmission, 300 MHz to 3 GHz which are ultra-high frequency (UHF) become more significant (and complex).

The ranges between 3 GHz up to 300 GHz are considered as the super-high frequency (SHF) and extremely high frequency (EHF) bands. These require to operate with visible lines in sight as any interference between the transmitter and receiving station can affect the quality of the signal. Hence, point-to-point communication, digital TV broadcasting, radio astronomy, and 5G technology shall utilize these bands.

Importance of spectrum allocation
Imagine being on a five-lane highway. Each lane is designated for specific types of vehicles to avoid any traffic jams and accidents. Consider that there is a fleet of large trucks going through the five lanes if there are no regulations stating in which lane they could drive-in. If they use all five, it will cause delays to the flow of traffic. Similarly, the spectrum frequencies are the lanes and the network operators are the vehicles. With the spectrum allocation, everything will be set into place to prevent signal interference and chaos in the airwaves.

Having described the situation above, spectrum allocation is the process of regulating the use of the RF and dividing it among various interested organizations. By conducting spectrum auctions for local coverage, this ensures that there is little competition when using a specific frequency band. Now more than ever, spectrum allocation is needed to address the huge demands of high-speed data transfer and communication.

In the Kingdom of Saudi Arabia, the spectrum outlook between 2021-2023 involves allocating more than 23 GHz of spectrum for a wide range of uses. Mohammed Al-Tamimi, CITC’s governor, explained the reasoning behind this, “We have strategically allocated the additional spectrum in accordance with international best practices, while still taking into account the rapid increase in local data consumption, which will fuel a bigger demand for spectrum in the future.’’

According to an S&P Global Market Intelligence report, spectrum auctions for low-band spectrum (mostly in the 700 MHz bands) are set to be held in 32 markets worldwide in the upcoming years. While operators whose 5G plans were hinged on the release of 3.5 GHz spectrum embraced dynamic spectrum sharing (DSS). This entailed the use of low- and mid-band spectrum — 700 MHz, 1.8 GHz, and 2.6 GHz — as substitute bands for 5G.

On the other hand, North America seems to be the only region where the high-band spectrum also known as millimeter-wave (mmWave) spectrum is highly coveted. The US successfully auctioned licenses in the 37 GHz, 39 GHz, and 47 GHz in 2020 while Canada likewise designated the 26 GHz, 28 GHz, 37 GHz-40 GHz, and 64 GHz-71 GHz bands as high priority bands that are set to be auctioned in 2021.

Deliberation on spectrum allocation
Higher frequencies in the spectrum are capable of carrying more information per second, allowing more customers to be served per small cell.  This means that, as carriers use higher portions of the spectrum, the cell size will decrease, creating the demand to build more cells and more antennas. Yet, as the downside, these are not as reliable as lower frequencies over longer distances.

In terms of the future use of the UHF spectrum in the ITU Region 1 which covers Europe, Africa, the Middle East west of the Persian Gulf including Iraq, the former Soviet Union, and Mongolia, a Plum Consulting report suggest that additional spectrum allocation for mobile use, rural areas, and transport routes must be taken at the local level with sufficient diligence, rather than controlled on a global or near-global scale.

As per its recommendation, the spectrum should be allocated on a co-primary basis to broadcasting and mobile services at WRC-23, with national governments and regulators able to make decisions over the
future use of UHF in an appropriate time frame. Thus, developing regional and national roadmaps for the potential of introducing mobile services in the 470-694 MHz based on the respective market demands in different regions should be done as well as forming liaise with neighboring countries to mitigate any interference caused by different services sharing channels across borders.

With careful planning of spectrum allocations, more efficient use of frequencies could benefit the greater good in various use cases and scenarios.