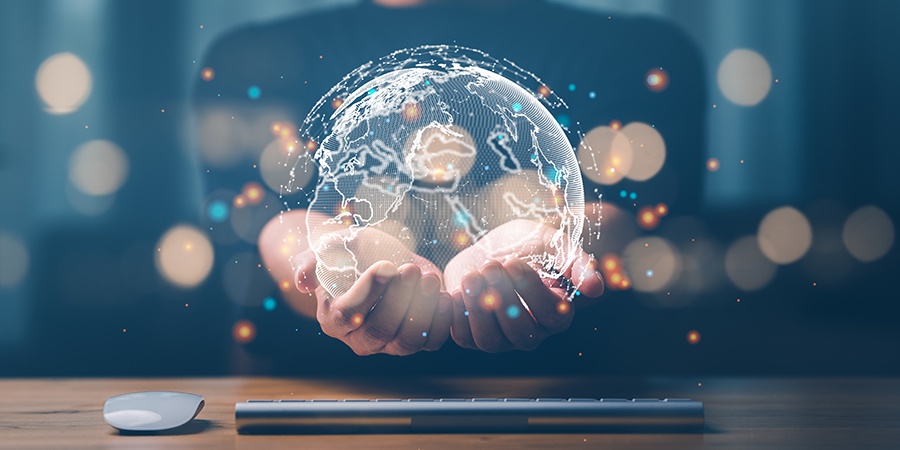 2022 has been marked by both tensions and innovations around the world. While necessarily picking up from a pandemic-stricken recent history, the global fiscal comeback is currently facing economic hurdles, the solutions for which technology must play a critical role in.

More than ever, innovation must set a long-term target and initiate from a start-from-now mindset. Strategic moves distinguish top economic performers who have already made progress on their digital transformation paths. Allocating capital, ensuring strong IT capabilities with digital future-ready skills, enforcing fair policies and integrating digital technologies are key to becoming a digital powerhouse.

No matter which country you are in today, the impact of going digital – both from the public and private sectors – can already be felt. Rural and unreachable areas may be an exception, but most regions are taking steps to keep up with the world’s rate of digital transformation, which furthers impact through smarter governance, competition and partnerships.

The World Is Going Digital

The rise of the digital economy has further intertwined and widened global integration as a new wave of digital technologies has come into the space. Beyond just internet-based companies, the entire stack of IT firms and their technologies are also involved, including semiconductors, hardware, software, e-commerce and payment services, among others.

The prevailing attitude toward IT and digital’s resultant impact on jobs and the economy is overwhelmingly positive. Having a digital-first financial inclusion strategy – one that’s cloud-powered, data-driven and built on greater access to reliable high-speed internet – can help countries take steps to formalize their economies and help their citizens become more empowered and more inclusive.

Simply put, a successful digital transformation must rest on the foundation of a smart digital strategy – one that can be perfected by implementing wise investment choices to maximize competitive growth and advantage.

Many countries now have their digital strategies in place to pioneer and kickstart such digital development on the value-creation front. Such planning is necessary now because, in many digital realms, network effects create a “winner-takes-all” situation, one in which first movers and intelligent followers ultimately have the edge.

A Glimpse of the Global Picture

According to the 2022 Global Innovation Index (GII) published by the World Intellectual Property Organization (WIPO), among the top 25 economies that are global leaders in innovation, Estonia makes notable progress this year, as does the United Arab Emirates (UAE) and Poland.

As per specific regions, North America, composed of the United States and Canada, is the most innovative geographical location in the world. Yet, Europe still hosts the largest number of innovation leaders – 15 in total – that rank among the top 25. These include Switzerland, Sweden, the UK and Netherlands.

Despite the fact that Asia as a region is catching up rapidly with North America and Europe – this because of the huge tech drives in Korea, Singapore and China – the gap with other world regions, like Latin America, the Caribbean and Sub-Saharan Africa, needs urgent attention.

Zooming in on specific countries, we’ll begin with Estonia. With its notable ”e-Estonia” model, the country remains among strong innovators as per the European Innovation Scoreboard, making the biggest development leap in recent years. With economic constraints such as a lack of natural resources and gas and a population of under two million, the solution was to make the data move easily and make its citizens’ lives more convenient and secure.

Next, regarding the UAE, this is an exciting period in the country’s business evolution as it considers itself the Silicon Valley of the Middle East. Its digital economy, equipped with among the world’s best digital infrastructure, is fast evolving and constantly changing with entrepreneurs, investors and public-private collaborations introducing innovative business models like smart cities, metaverse, AI, IoT and robotics. These are not only making processes easier and more sustainable, but they are also opening the country toward becoming a long-term technology destination of choice for start-ups and digital nomads.

Poland is also on the rise and set to become a major tech hub in Europe, with the country’s collective IT expenditure growing to nearly 17% in 2021, totaling more than $20 billion. In the first three months of 2022, venture capitalists have already invested a total of €251 million in Polish businesses, and more impressively, Poland has the third-best developers globally, just behind China and Russia, and has the largest pool of developers in central and eastern Europe, accounting for nearly 25% of the entire developer population in the region.

In the Americas, countries in both Latin America and the Caribbean (LAC) are said to be facing the most serious socio-economic crisis since World War II, experiencing widening inequality and development gaps due to the COVID-19 pandemic. Transportation has been key to sustaining the overall economy, and through digital transformation, this sector can bring unprecedented efficiency gains from greater visibility and streamlined and multi-stakeholder processes; improve the overall quality of services; and diversify its income sources through new services generation.

In the African context, the market dominance of Chinese tech companies like Huawei and ZTE in the telecom sector – from the construction of digital infrastructure such as data centers to the export of technologies like 5G – has led to the widespread adoption of Chinese technology standards in the region.

Contentions to Be Settled

Regarding the innovative steps taken across various countries, some debatable information has also arisen.

Additionally, China's drive for homegrown innovation, fueled by tensions with the West, could lead to a decoupling of the country's technology from that of the rest of the world, according to business specialists, while other Asian nations continue to specialize and compete mostly in hardware and components. Yet, the Chinese government is pushing for better R&D, smart manufacturing facilities and a more sophisticated digital economy. Adding quality alongside quantity will be crucial to fulfilling China’s innovation ambitions.

Moving to the West, shaping the global IT and digital economy in ways that are aligned with US interests is one of the most important challenges facing the country’s foreign and economic policies. Even Europe has been unable to nurture data-driven business models through a large domestic market and is seen to be lagging on effective innovation because firms do not embrace IT, ecosystem-based business models.

Beyond building a values-based narrative around the digital economy, transatlantic cooperation can also be instrumental in creating a level playing field for European and American companies to compete with Chinese companies.

Despite the economic downturn we are seeing, investments in science and innovation have been remarkably resilient, and technology adoption has continued to record positive growth rates. In terms of broadband penetration, as of today, 17 out of every 100 world inhabitants are connected to fixed broadband, compared to just 9 out of 100 in 2011. With only 3 billion people remaining unconnected, the speed and efficacy of internet and broadband deployment worldwide have been one of the most successful unveilings in the history of all technologies.

And technology will undoubtedly continue to play an increasingly important role in advancement, growth and innovation in all parts of the world. The digital age’s next wave will take some time to fully materialize and overcome numerous obstacles, particularly in the areas of technology adoption and diffusion. Innovation will prevail, however, and result in more sophisticated and advanced ICT solutions to increase productivity and profitability as well as greater opportunities to build an improved and sustainable blueprint for the modern world.