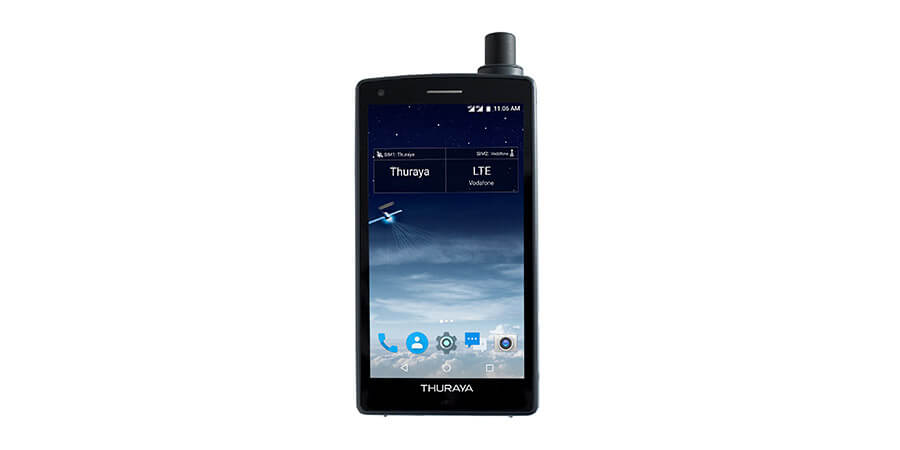 Dubai-based mobile satellite communications company Thuraya welcomed international and regional delegates from Africa, Asia, Australia, Europe, the GCC and North America to its 16th annual partner conference in Dubai on April 10-11. The company launched its new X5-Touch satellite pone which runs on the Android Operating System and has a 5.2" full HD touchscreen.

The Thuraya X5-Touch satellite phone targets users who frequently move in and out of terrestrial coverage across a range of market sectors including government missions, energy projects, enterprise communications, and NGO deployments.

The phone is a step closer towards complete convergence between terrestrial and satellite communications through its full dual-mode and dual-SIM capability. It has two SIM-card slots for full user flexibility, and with the dual-active mode it has the ability to have both its satellite and GSM (2G, 3G, or 4G) modes 'always on' simultaneously.

To cater for the needs of users in harsh and remote conditions, the Thuraya X5-Touch comes with a Gorilla® glass display, has an IP67 standard for full dust and water protection, and complies with MIL standard. It also has a host of advanced features and functionalities including a high-capacity battery for extended talk time and standby time, a built-in SOS button and a front and rear camera.

Thuraya's partner event was kicked-off by a presentation from acting Chief Executive Officer, Ahmed Al Shamsi, who shared an overview of the company's progress in 2017 and its plans moving forward. The sessions that followed involved a number of guest speakers including Mr. Dietmar Schmitt, Head of Technologies and Products Division at the European Space Agency, as well as Dr. Muneer Zuhdi, CTO and Head of Global IoT Smart City Solutions at Nokia.

"Thuraya reached a new milestone by introducing another innovative and ground breaking product to the MSS market," said Al Shamsi speaking about the new satellite phone product. "Building on the heritage of a long line of successful satellite phones, this new development focuses primarily on delivering a unique and more interactive experience to our customers."

The Thuraya X5-Touch is equipped with GPS, Glonass, and BeiDou systems for advanced navigation and tracking functions, which are important safety features during critical situations and it comes with Wi-Fi, Bluetooth, and NFC.

"The Thuraya X5-Touch is a game changer and a big step forward in design and functionality placing it in a league of its own," said Alexander Lachner, Director of Voice Services at Thuraya. "Creating smarter satellite phones is our constant goal and we are happy to offer our customers a new user experience that many in the industry have been asking and waiting for."

Thuraya's comprehensive satellite network provides reliable, clear and uninterrupted communications in more than 160 countries across Europe, Africa, Asia and Australia; and in terrestrial mode the Thuraya X5-Touch supports most 2G/3G/4G frequencies across the world. The phone works either with Thuraya SIM cards or with GSM SIM cards or a combination of both.

During the two-day program of the partner event, Thuraya launched several other new products, and shared information with partners about growth plans for 2018 and beyond. The second day of the event comprised of technical workshops as well as a product exhibition area by more than 15 exhibitors.

Throughout 2017, Thuraya strengthened its product innovation strategy, business models and distribution channels. The company unveiled a number of new products and services including Thuraya IP M2M - an advanced telemetry solution for M2M connectivity in remote locations.

Additionally, and to allow customers a convenient way to stay connected, Thuraya Talk, a high quality Voice over IP (VoIP) service, was launched for personal and professional use. It also announced Thuraya WE, the world's first dual-mode Satellite and LTE hotspot, and Thuraya Aero, an airborne data-sharing platform for in-flight connectivity.