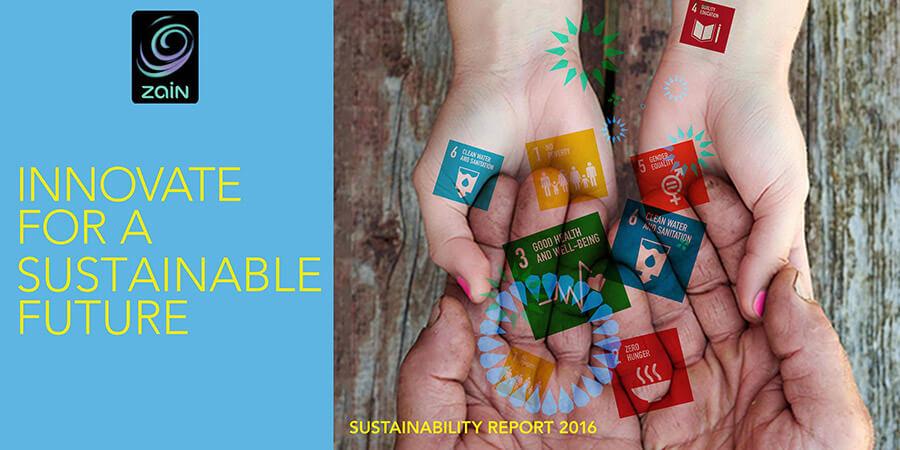 Zain Group, the leading mobile telecom innovator with a presence in eight markets across the Middle East and Africa, announces the publication of its sixth annual sustainability report, entitled 'Innovate for a Sustainable Future'. The release of this latest report, which is aligned with the United Nations Guiding Principles (UNGP) and adheres to the G4 reporting guidelines set by the Global Reporting Initiative (GRI), reinforces Zain Group's position as one of the most consistently transparent mobile operators in the MENA region given the depth of information it openly shares.

Available exclusively online through an interactive interface that is user-friendly, and which also minimizes the company's environmental impact, this year's publication has a key new development. The report includes a section demonstrating the company's ongoing commitment to align its policies and activities with the United Nations' Sustainable Development Goals (SDGs), highlighting launched and established initiatives across all operating companies that address the goals.

Zain's commitment to sustainability is reflected in the long list of activities and initiatives the company runs in any given year, many of which are highlighted within the latest report. All operating companies continue to drive the sustainability agenda through activities such as the introduction of Zain Cash in Iraq and re-launch in Jordan, of which a case study is provided in the Report, offering a view on how the commercial service provides a secure and convenient means to conduct financial transactions. With approximately 90% of the population unbanked in Iraq and a high percentage in Jordan as well, Zain Cash has a significant positive impact on the society as it helps in addressing economic disparity.

The company has also been involved in highly visible corporate sustainability pursuits such as Zain Jordan's collaboration with the UNHCR and Facebook to provide free hi-speed Wi-Fi connectivity for refugees and underserved communities in pre-selected centers across the Kingdom, with the project set to be in place for five years.

Other examples highlighted, include flagship operator Zain Kuwait donating a sizeable amount in 2016 to support the education of underprivileged children in Kuwait as part of its ongoing humanitarian strategic partnership with the Kuwait Red Crescent Society. This partnership aims to create and develop inclusivity when it comes to providing access to education for marginalized segments in Kuwait.

Zain Group has always been known as a strong contributor to employment across its markets, though this year's report identifies the extent to which its operations have a knock-on effect in their respective countries of operation, creating a significant amount of jobs through its value chain by providing more business to local suppliers.

During 2016, Zain also continued to focus on further developing the entrepreneurial and youth-focused ecosystem through initiatives such as its participation in the MIT Enterprise Forum (MITEF) Startup Competition, a regional startup competition that offers participants seed money, training, media exposure, and networking opportunities. A record 6,000 teams (representing over 12,000 individuals) submitted to the competition. Additionally, Zain partnered the MITEF 'Innovate for Refugees' competition that invited entrepreneurs and refugees from around the world to come up with tech-driven, innovative solutions to help address the global refugee crisis. The initiative attracted over 1,600 applications from across the globe.

Zain Iraq hosted a startup weekend in Baghdad, Iraq, which provided a workshop in which students and other young Iraqis were brought together to pitch their entrepreneurial ideas to assembled judges and members of the audience. While, in Sudan, Zain sponsored the country's first business accelerator program to promote a more startup friendly and innovative ecosystem in the country.

Addressing a major deficit of 'skills mismatch' in the region, Zain continued in its efforts to narrow the gap with Zain Bahrain holding a 'Youth City ICT Jobs' workshop to educate youth about job potential in the ICT sector that was attended by 80 high school students. Similarly, based on a Silicon Valley curriculum, Zain Jordan undertook 'ReBoot Kamp', a 16-week program designed to produce high quality software engineers that saw 17 students graduated from this course in 2016, with two students being refugees and all participants attaining quality jobs thereafter.

Established in 2014 Jordan's Zain Innovation Campus (ZINC) is again highlighted in the report. A space dedicated to cultivating innovative ideas and startups, during 2016 ZINC hosted various events that aimed to address the skill mismatch that our region faces. One key initiative was centered around cyber security and women, with ZINC hosting the 'Girls in Tech'- Jordan Chapter for the first Tech Talk that covered cyber security, privacy, and what precautions women need to take when assaulted online. Overall, ZINC attracted 15,791 young aspiring attendees over the year.