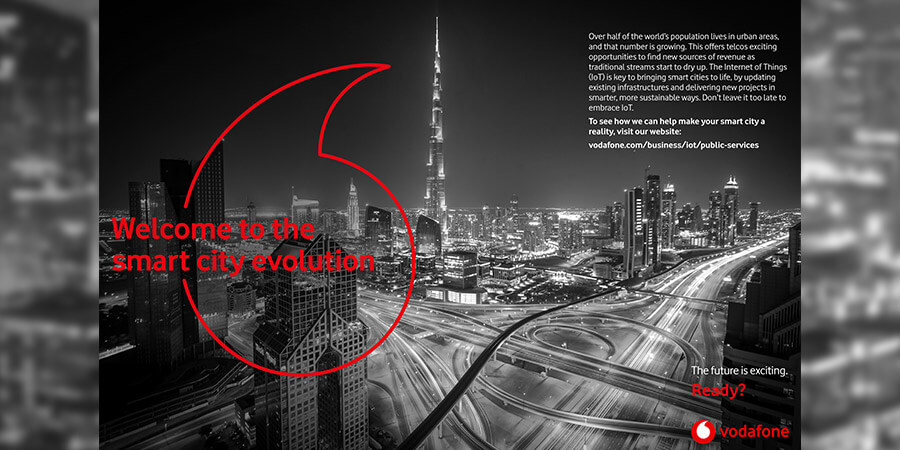 Your customers want access to the latest technologies to keep them ahead of the competition. And the internet of things (IoT) is key to that. It's not just the latest buzzword in technology. Here's why you should make IoT a priority in 2018.

Don't be misled into thinking that IoT is all about flashy consumer technology. Organizations across the Middle East are already leveraging smart devices to streamline operations and boost efficiency across the board. It's enabling them to deliver business benefits and drive innovation faster and further than ever before. It's time to give your customers what they really want and start embracing what could be the most disruptive technology yet.

IoT opens up massive opportunities
Every year since 2013, Vodafone has published its IoT Barometer to provide insight into how IoT is transforming the world of business. The 2017/18 report found that organizations have great expectations for IoT. Seventy-nine percent of organizations that have adopted IoT think it will have an enormous or sizeable impact on the whole economy within five years. And almost three-quarters of adopters agree that digital transformation is impossible without IoT.

But this isn't just about the promise of IoT itself. IoT is an important precursor of many transformative technologies. IoT is essential to the connected car and autonomous vehicles. It's already playing a key role in the rise of automation, including robotics, self-service and process automation. And it's paving the way for exciting new customer experiences, like zero-touch checkout and smart vending machines.  Gartner believes more than 85 percent of customer interactions will be managed without a human by 2020.

IoT is also a key enabler of artificial intelligence (AI), which will be a top-five investment priority for nearly a third of CIOs by 2022, according to a recent Gartner study. The value of AI is in interpreting millions of data points. IoT is providing that data. The IoT Barometer 2017/18 found that 49 percent of adopters are using IoT in conjunction with analytics to improve business decision-making.

As well as headline-grabbing innovations, IoT helps with perennial challenges
There are some unconventional projects out there, like the connected salt cellar and the smart toilet. But there are millions more that won't ever hit the headlines. Things like condition-based monitoring often aren't very glamorous - unlike connected cars or smart mirrors, for example - but they can totally transform operations.

IoT is already helping companies streamline their everyday processes. According to the Barometer 2017/18, 45 percent of adopters report that IoT has helped improve employee productivity and 38 percent report improved asset utilization. It's also helping them cut costs. And the savings can be significant. Twenty-nine percent of respondents who said they'd achieved cost reductions saved more than 20 percent. According to McKinsey, predictive maintenance alone could save companies $630 billion by 2025.

What starts as a seemingly unexciting use case can provide the basis for whole new ventures. Vodafone has seen organizations putting IoT in place to solve a specific problem or reduce costs, but then branching out and using these devices to capture other valuable data. Take the example of smart street lighting; it might start out as an energy saving initiative, but the sensors can also be used to monitor weather conditions and traffic, or to improve the safety of residents.

IoT delivers results
Nearly all of the IoT adopters that took part in Vodafone's annual Barometer research said that they'd seen a return on investment (ROI). More than half of adopters said IoT is increasing revenue or opening up new revenue streams. And the returns can be significant; where organizations reported an increase in revenue, it averaged 19 percent.

This success is driving increased investment. Eighty-eight percent of adopters that report seeing significant benefits from IoT say they're spending more on IoT now than 12 months ago. Fail to make IoT a high priority on your 2018 budget, and you could find yourself at a competitive disadvantage.

Your customers don't want to be left behind
When Vodafone published the first Barometer in 2013, adoption was just 12 percent. Since then, adoption has more than doubled, reaching 29 percent in 2017. But it's not just more companies using IoT. Adopters are increasing the number of projects and the number of connected devices too. In 2016, 28 percent of adopters had more than 1,000 connected devices; in 2017, that's risen to 37 percent. And the proportion of companies with over 50,000 or more connections has doubled year on year. There are bigger, more integrated program spanning business functions.

In the five years since the first IoT Barometer, Vodafone has seen dramatic change. In another five years' time IoT will probably be a critical part of the operations of most leading organizations; 67 percent of adopters already say that their IoT projects are mission-critical. And investment in IoT shows no signs of slowing down. For instance, UAE and Saudi Arabia spending on smart city IoT is forecast to grow over 40 percent over 2018/19. Fail to make IoT a high priority and you could find your customers struggling to catch up with the pace setters - and looking elsewhere for technology expertise.

Now's the time to push ahead
Some companies have been holding off adopting IoT, waiting until the technology is proven and the business cases are more fully understood. But as you sit down to start building your plans for 2018 and beyond, there's never been a better time to invest in IoT. Your customers already want this technology. How long will you make them wait for it?

Does your portfolio include the services that your customers want? Vodafone can help you understand where IoT could help your business and help you accelerate your solution development. Enable your customers to integrate IoT projects with their core systems and make their solutions easier to manage, giving them a solid foundation for future success.

And Vodafone's expertise with low-power wide area networks (LP-WAN), such as Narrowband-IoT (NB-IoT), could help your customers catch up with the competition, quickly. Twenty-eight percent of those that plan to adopt IoT in the future are already investigating LP-WAN technologies, with their promise of increased network coverage and greater cost efficiency.

Read the IoT Barometer 2017/18 for an in-depth look at how IoT is transforming the world of business - and what the future holds.