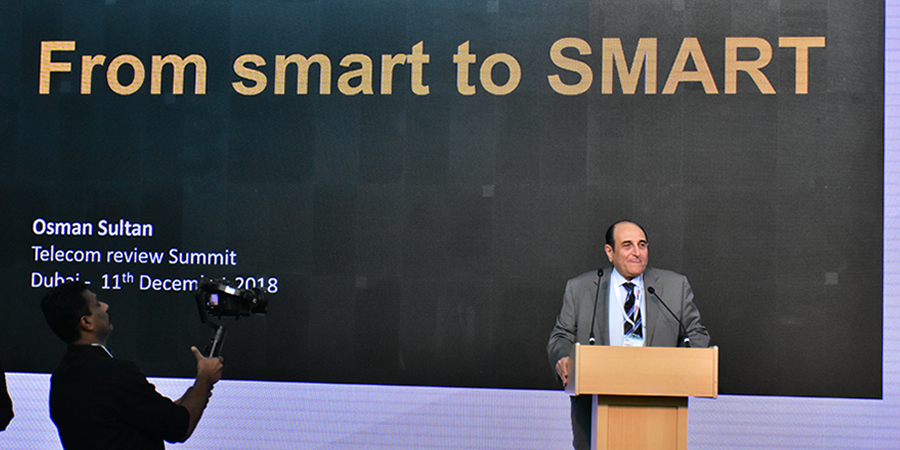 On Day 2 of the Telecom Review Leaders’ Summit 2018, the theme shifted from ‘Smart Networking’ to ‘Building the SMART Future’ for the 2nd edition of Smart Cities World Forums.

CEO of EITC, Osman Sultan gave the opening keynote presentation which was entitled: Smart Operator for a Smart City.

Sultan delivered an engaging and interactive presentation that had the large crowd in attendance captivated as he explored the potential opportunities for operators’ in the smart city space.

The charismatic CEO began his presentation by focusing on talent, and said that recruiting the right talent and creating the right environment for them to prosper was critically important, as the telecommunication industry continues to undergo huge digital transformation in its efforts to create new business models. He said operators’ needed to think differently.

The CEO of EITC, said, "Culture is the only thing that can't be replicated. This will force us to think differently, and as a result we will create a holistic workforce ecosystem. Talent will take your company from strategy to execution to culture.”

In relation to Smart Cities, Sultan claimed that Dubai has always been ‘smart’, and that it has served as a benchmark for technological progress over the last 20 years. However, he stressed that Dubai was more a city of ‘smart applications’ as oppose to being a cohesive all-encompassing smart city.

Sultan then turned his attentions to that of governance and said that the speed of legislation was lagging behind with regards to the speed of technological development. He also noted that every communication service provider is now providing digital services.

EITC’s CEO then highlighted that after The Industrial Revolution, the focus switched to automation, then we transitioned towards digital and then the focus became making digital ‘smarter’. Now we’re developing AI-powered robots, but warned that the objective behind every new technology should be people-centric.

“Technology is amazing and can transform industries and society, but it has to be focused on the benefiting the lives of mankind?”

He concluded a brilliant presentation by calling for those within the ICT ecosystem to be brave and to seize the opportunities that is going to be presented by 5G and other emerging technologies.