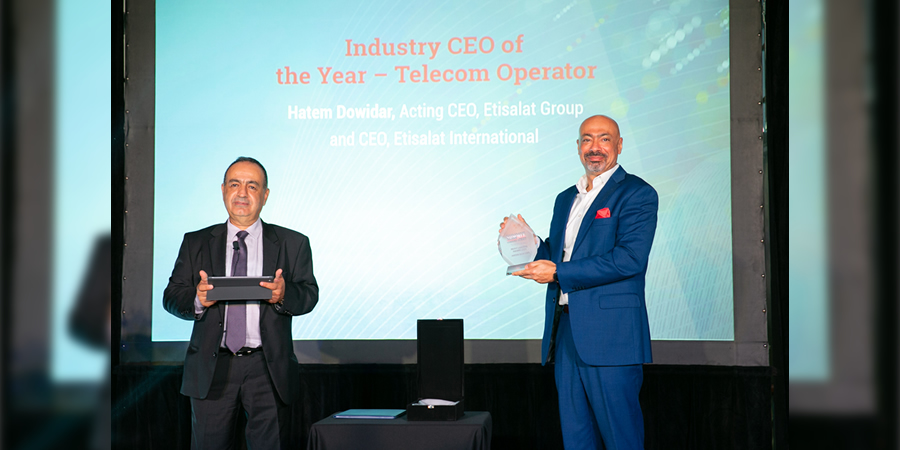 At the 14th edition of Telecom Review Leaders’ Summit, the ICT industry’s biggest and first hybrid event in the Middle East, CEO of Etisalat International, Hatem Dowidar, was awarded ‘Industry CEO of the Year- Telecom Operator’.

Hatem Dowidar has 30 years of experience in multinational companies, 24 of which were within the telecommunications industry in various leadership positions. Throughout his career he has explored new territories, countries in Europe, Africa and in the Middle East. Right from being one of the leaders in the marketing function at one of the largest multinational consumer goods firms P&G to spearheading one of the leading telecom companies in the world across its global operations.

Dowidar joined Etisalat Group in 2015 as Group Chief Operating Officer and was later appointed as CEO, International of Etisalat Group. Today, Etisalat is active in 16 countries and 149 million subscribers steering the wind of opportunities with a major focus on innovation and transformation. Under Dowidar's leadership, Etisalat brand value has been consistent across it international markets with a global recognition as the most valuable brands.

Today Dowidar is leading Etisalat Group as Acting CEO with the company taking a global lead as a brand and in the network. Etisalat is ranked as the fastest mobile network in the world and is the most valuable consumer brand in MEA for the 3rd consecutive year and most innovative player globally at with portfolio of brands valued at $11 billion.

Under Dowidar’s guidance all the teams continued their support with relentless efforts on the network and services during the pandemic to support the student community and all the businesses to study and work home. On the network, Etisalat leads globally and in the region in setting benchmarks in 5G by becoming the first operator to provide services on the fixed network.