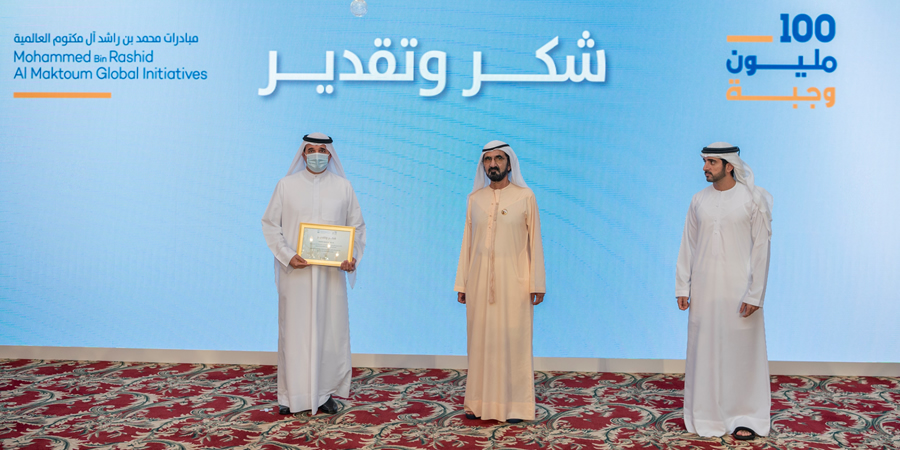 Etisalat was honoured in the presence of His Highness Sheikh Hamdan bin Mohammed bin Rashid Al Maktoum, Crown Prince of Dubai and Chairman of the Executive Council, in appreciation of the outstanding support that it provided to the ‘100 Million Meals’ campaign, the region’s largest food drive that will benefit underprivileged communities in 30 countries in the Middle East, Asia, Africa, Europe, and Latin America.

Etisalat raised a total of AED3.6 million from exclusive mobile numbers that it had allocated through the Noblest Numbers charity auction to raise funds in support of the ‘100 Million Meals’ campaign.

Commenting on this occasion, Abdulla Salem Al Mana, General Manager, Dubai Region, Etisalat, said, “Etisalat is proud of this honour which inspires us to be involved in more humanitarian and charitable initiatives by the UAE government. Our participation in the ‘100 Million Meals’ campaign stems from our commitment to corporate social responsibility and participation in extending a helping hand to underprivileged families this Ramadan and alleviating the suffering of people affected by the COVID-19 pandemic.”

Etisalat supported the ‘100 Million Meals’ campaign since its launch by pledging to donate five percent of all food orders placed on its Smiles app; promoting the campaign via text messages, social media, and changing the network name to ‘100M Meals’ to raise awareness of the initiative; and allocating exclusive numbers in the numbers charity auction.

Millions of refugees and poor individuals and families in economically weak countries benefit from UAE’s ‘100m Meals Campaign’. The humanitarian campaign has garnered support and the highest appreciation from world bodies such as the UN’s World Food Programme (WFP).

The campaign enables corporates, entities, humanitarian and charitable organizations, businessmen, philanthropists, and the public to make financial contributions towards meals and donate food items to support vulnerable individuals and families.