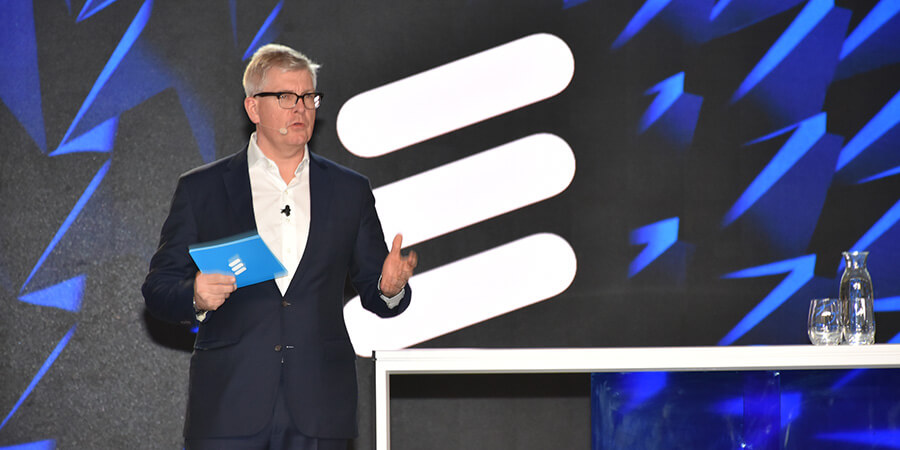 Ericsson held a press conference at Mobile World Congress early Monday in Barcelona, where CEO Borje Ekholm outlined the vendor's ambitions and expectations for 5G and IoT. While Ericsson aims to be the partner for operators to adopt the next-generation technology, Ekholm warned 5G is "inherently more complex" compared to previous generations, and urged operators to prepare for it as soon as possible.

Last year, when Ekholm delivered his keynote speech at Mobile World Congress 2017, he had been CEO for only four weeks, having just replaced former CEO Hans Vestberg. Now, after more than a year in the chief executive position, Ekholm delivered his vision for the company as it moves forward and aims to be the preferred partner for organizations to prepare for 5G and Internet of Things (IoT).

Ericsson has signed 38 MoUs with service providers for 5G field trials, Ekholm proudly announced, and more importantly, the company has signed several contracts for commercial deliveries of 5G by the end of this year. The chief executive said Ericsson leaves it up to its partners to announce these contracts and didn't offer any more specific details.

He went on to highlight how 5G will cater to industries beyond consumer smartphones. "We believe 5G will have multiple use cases that leverage its capabilities. That is, of course, more bandwidth, but more importantly, lower latency and longer battery life," Ekholm said. "However, we believe enhanced mobile broadband will be the first commercial deployment of 5G."

Mobile networks need to cope with the huge surge in data traffic happening around the world in order to provide a better user experience for the end user, Ekholm explained, because network performance is one of the key drivers of net promoter score for service providers. Enhanced mobile broadband is the solution.

On a global level, he said Ericsson has seen traffic grow by 65% year-on-year over the last five years, and forecasts, up until 2023, that data traffic will grow 40% per year which means eight times the volume of data traffic in 2023.

"Enhanced mobile broadband is not only about coping with the surging traffic for the best user experience - it's also about network efficiency," said Ekholm. "It's crucial for the service provider to not have costs get out of control as data traffic surges ahead."

Ericsson predicts that 5G devices will start to appear on the market early next year, and by 2023, there will be a billion subscribers of 5G on enhanced mobile broadband carrying about 20% of global data traffic.

But enhanced mobile broadband is really only the first use case, said Ekholm. "For instance, as we talk to our Chinese customers, we see that the conversation is much more focused on broad-scale use cases for industrial applications such as factory automation, remote controlled machines, and so on - the industrial internet," he said.

"Over the past year, it has become increasingly clear that IoT and 5G are part of the same overall strategic discussion. Future factories will be sprinkled with sensors", Ekholm added, reflecting on studies conducted in Ericsson's own factories. The company believes there will be one sensor per cubic meter in factories of the future.

With that density, interference becomes a problem, Ekholm further added. Therefore, Wi-Fi cannot be the go-to technology for critical communications. Wi-Fi is an effective technology for short-range communication, but when it is mission critical, truly reliable and secure connectivity is needed, and Wi-Fi cannot provide that. Instead, licensed spectrum will be a key competitive advantage provided by operators.

"In 2026, we see a market worth up to $66 billion for this [critical communications], which is a great opportunity for service providers, for critical and massive IoT deployments around the world," Ekholm said. "We see the manufacturing and utilities sectors as the most important use cases for IoT and 5G."

Ericsson's outlook going forward is that 4G is the foundation for 5G. "We are highlighting this here at Mobile World Congress via demos where you will see Massive MIMO as well as network slicing for 4G," Ekholm said. "Massive MIMO has the potential to increase capacity by three to five times compared to regular LTE deployment."

Ericsson has worked with numerous service providers for a strategy focused on network quality in preparation for 5G. Providers know there is value in being early adopters, Ekholm added. "We don't know which use case will be the most important for 5G, but we do know, from experience, that being early in preparing for the technology has huge value. We saw this with 4G and we believe it will be the same with 5G," he said.

The previous 5G Business Potential report found that operators can add a revenue of US$204 to 619 billion (12 to 36 percent) to their forecast service revenues of US$1.7 trillion in 2026. They can do this by targeting the digital transformation of other industries, such as automotive and manufacturing, using 5G-IoT technology.

In its latest 5G-IoT report, Ericsson examined more than 400 industry digitalization use cases across 10 industries: energy & utilities; manufacturing; public safety; healthcare; public transport; media and entertainment; automotive; financial services; retail and agriculture. Of the 400 use cases, over 200 are where 5G is expected to play a vital role. These were grouped into clusters to boost revenue opportunities and overcome deployment challenges.

Through extensive operator engagements and a carefully chosen analytical framework, Ericsson created a comprehensive guide for operators to address a range of challenges. The report also highlights how use cases can be evolved to reach the full 5G-enabled industry digitalization business potential. Lastly, it looks at various operator initiatives and shares some of the lessons learned so far.