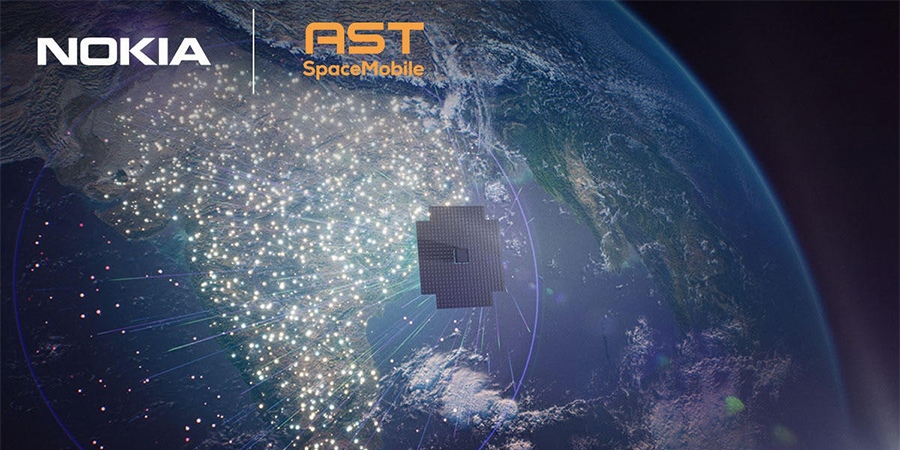 Nokia has announced that they have signed a five-year 5G deal with AST SpaceMobile, Inc., the company building the first and only space-based cellular broadband network accessible directly by standard 4G or 5G mobile devices. Under the deal, Nokia and AST SpaceMobile will work to achieve their joint ambition to expand universal coverage and connect underserved communities around the world. The launch of AST SpaceMobile’s BlueWalker 3 test satellite later this year will kick off global testing with mobile network operators on six continents.

AST SpaceMobile's mission is to eliminate the connectivity gaps faced by over five billion mobile subscribers worldwide and to bring cellular broadband to approximately half of the world's population who remain unconnected. Their approach will mean that subscribers outside the reach of cellular coverage could have access to broadband speeds without having to invest in specialized hardware and be able to roam from land networks to space networks for the first time. Through its mobile network operator relationships, AST SpaceMobile has entered into agreements and understandings with mobile network operators which collectively service over 1.8 billion cellular customers.

Nokia’s AirScale Single RAN equipment aims to enable AST SpaceMobile in providing mobile services to new and existing subscribers in regions currently not served by terrestrial communication networks. This includes connecting devices globally on land, at sea or in flight. Nokia will provide equipment from its comprehensive, energy-efficient AirScale portfolio, including its AirScale base stations powered by its latest generation of Nokia’s ReefShark System-on-Chip (SoC) chipsets. AST SpaceMobile will benefit from Nokia’s modular baseband plug-in cards which add capacity where it’s needed, offering flexibility and efficiency. Nokia will also provide its NetAct solution for network management and seamless daily network operations as well as optimization and technical support services.

“Connectivity should be considered an essential service like water, electricity, or gas. Everyone should be able to have access to universal broadband services that will ensure that no one is left behind,” said Tommi Uitto, President of Mobile Networks at Nokia. “Nokia has a long history of delivering connectivity solutions that have had a major and positive impact on society. We have worked closely with AST SpaceMobile on this important initiative for two years which seeks to provide crucial connectivity from space to underserved communities around the world. We are of course proud our technology is playing an important role in underpinning the networks.”

For testing purposes, AST SpaceMobile plans to launch its BlueWalker 3 satellite in early to mid-September from Cape Canaveral, Florida. BlueWalker 3 is a low Earth orbiting satellite and has an aperture of approximately 64 square meters (693 square feet), which is designed to communicate directly with cellular devices via 3GPP standard frequencies. Ultimately, AST SpaceMobile is aiming to deploy approximately 100 satellites to achieve substantial global mobile coverage.

“With the integration of Nokia’s AirScale system, AST SpaceMobile and Nokia are taking an important step toward closing connectivity gaps all over the world," noted Scott Wisniewski, Chief Strategy Officer at AST SpaceMobile. “Nokia is supporting us with dozens of engineers and development professionals, including leading architecture research experts at Bell Labs, the world-renowned industrial research arm of Nokia. In the coming months, we are scheduled to launch our BlueWalker 3 test satellite into low Earth orbit, which has a 64-square meter phased array antenna designed for direct-to-cell connectivity. With this satellite, we plan to conduct testing all over the world with leading mobile network operators, leveraging Nokia's technology solutions on the ground.”

Nokia is committed to equitable opportunity for all and promoting access to education, healthcare, jobs and community digital services. Nokia supports the 2025 targets set by The Broadband Commission for Sustainable Development that aims to “connect the other half” in the next five years. They are involved in several projects underway around the world, including in El Salvador and Kenya. These public/private initiatives are designed to bring public services such as schools and hospitals online. They are intended to vastly improve internet access and create the foundations that will enable everyone to participate in the digital economy.