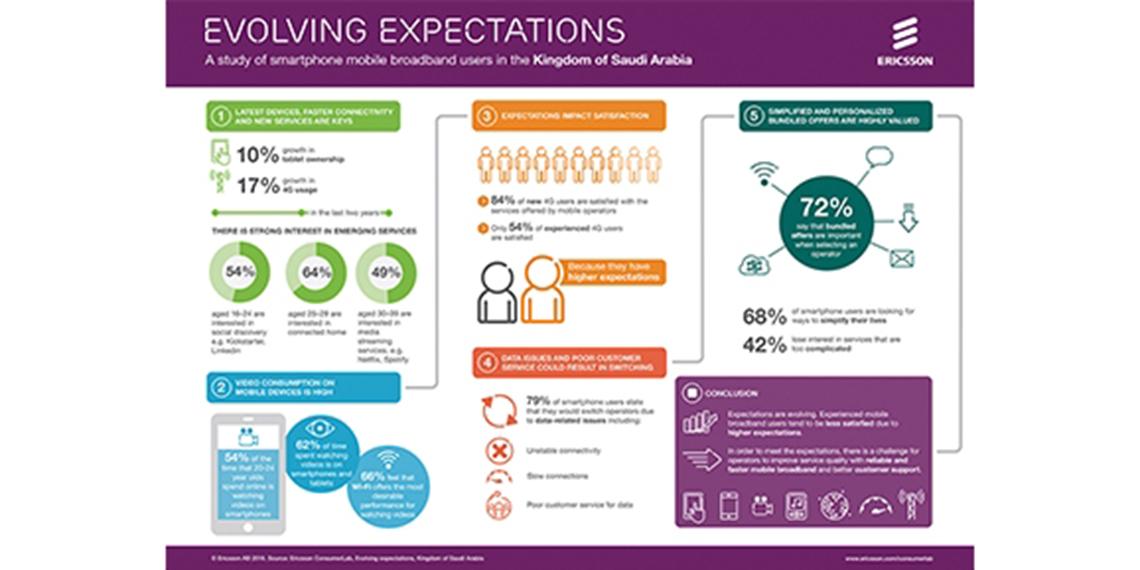 Mobile broadband usage is quickly gaining momentum in Saudi Arabia and consumers look for simplicity from their operators. As a very video-centric market, users consider data speed and quality to be the most important factors when it comes to value for money. In a report done by Ericsson, the company shares insights from research, evaluating mobile broadband usage and behavior in the Kingdom of Saudi Arabia.

Face-to-face and online interviews were conducted among smartphone users aged 15-59, who were connecting to the internet using 3G or 4G networks in 2014-15. The findings reveal the views of 2,025 respondents from major cities including Al Khobar, Dammam, Jeddah, Makkah and Riyadh, representing 30 percent of the population of Saudi Arabia. The report also references insights from Ericsson ConsumerLabâ€™s Analytical Platform. These insights have been specifically used to compare Saudi Arabia with advanced economies, as well as other countries in the Middle East.

In this report, Ericsson examines the changing attitudes and behaviors of experienced and new users of mobile broadband in Saudi Arabia, driven by their expectations for faster mobile connectivity. The analysis shows a change in purchasing behavior. Users want simple products and service offerings, less complex product-price bundling, easy access, and a relationship with their operator that is built on trust and credibility.

When it comes to the internet, it has become an integral part of everyday life for smartphone users in Saudi Arabia. They are almost on par with their Western counterparts in terms of internet usage throughout the day (66 percent), and 54 percent consider it to be their main source of news and entertainment.

It is evident that smartphone users are willing to invest in the latest devices and faster connectivity. For instance, tablet ownership grew from 63 percent in 2013, to 73 percent in 2015, and the share of 4G on smartphones has grown by 17 percent among smartphone mobile broadband users.

Analysis of the different age groups shows that 54 percent of 16-24 years old are interested in social discovery and 59 percent of them state that they cannot live without social media. They tend to trust what people say online about brands more than other sources, and they enjoy expressing their views online, in social networks, blogs and forums. Their inclination to stay connected throughout the day has led to an interest in other connected services.

Sixty-four percent of 25-29 years old are interested in connected homes, and 80 percent state that they use the internet constantly throughout the day. Thirty - 39 years old express an interest in media streaming services, and 31 percent state that most of their TV/video-watching is either on-demand, catch-up or online. They are more interested in subscription services like Netflix or Spotify over purchasing physical products. Forty-seven percent of 40-49 years old express interest in multi-screening and screen stacking, and 32 percent state that they go online using a range of devices.

Moreover, Saudi Arabia is one of the most active video-viewing nations. The share of time spent watching video on mobile devices in Saudi Arabia is notably higher (62 percent) compared to other countries. Young millenials (20-24 year olds) spend 54 percent of their time online watching videos on smartphones.

Video consumption on mobile devices is high, yet 66 percent of smartphone users still feel that WiFi offers the most desirable performance for watching video. Consumer expectations with regards to mobile connectivity are high. However, they also feel that the mobile network provides mobility everywhere.

Connection preferences vary depending on where consumers are, as well as which connection they think is most likely to meet their expectations in that location. At home, even with the availability of WiFi, 32 percent of 4G mobile broadband users prefer to use a mobile network or are indifferent to whether they are using mobile broadband or WiFi.

On the other side, mobility and connectivity have become basic requirements, especially for those who are on 4G networks. It is interesting to note that the Net Promoter Score (NPS) in Saudi Arabia is on par with the US. However, in order for consumers to start recommending brands, it is key that their expectations are met.

Experienced mobile broadband users on 4G mobile networks watch most of the videos on smartphones, but have the lowest satisfaction with video streaming. Obviously, 21 percent of this group is more likely to switch operators, which is not just related to mobile data. Around 40 percent would switch due to the lack of innovative offers and poor customer service for mobile data services. Bundling offers could help to address this.

Furthermore, simplicity is emerging as one of the key qualities that consumers consider essential. Overall, 68 percent say that they are looking for ways to simplify their lives.

Ninety-five percent of respondents who say that a faster mobile network is more important than the price plan, also say that they are looking for ways to simplify their lives.

Forty-two percent say that they would lose interest in technologies and services that are too complicated. As a result, 67 percent say that it is important that information from the mobile operator is easy to understand and access.

As for trust and credibility, these are the most important factors when choosing an operator, followed by bundled offers, which can simplify the decision-making process. Seventy-two percent of smartphone users now say that bundled offers are important, compared to 62 percent in 2013. The preference for bundling is more prominent among the respondents who prefer to simplify life, with more than 82 percent of respondents showing a preference for bundling offers. Finally, 58 percent say that the number of branch offices an operator has is an important factor that is considered when selecting an operator.

It is clear that in KSA there is high reliance on mobile devices for video, which is mainly driven by the youth. Expectations are also evolving over time and experienced mobile broadband users tend to be less satisfied due to the fact that they have higher expectations. To increase satisfaction, operators need to continue to focus on improving service quality with reliable and faster mobile broadband and better customer support.