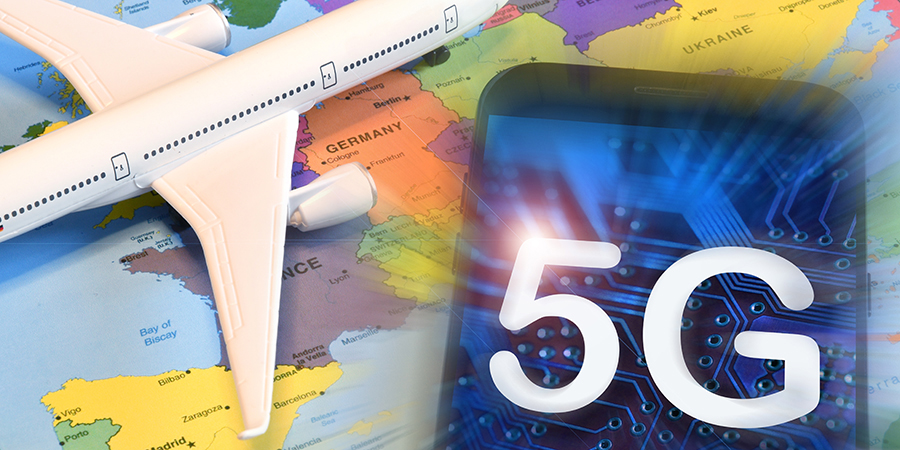 The 5G C-band deployment in the US has been put out of its airplane mode, but still with restrictions. It has been weeks of back and forth negotiations between the telecom operators involved and the aviation players just to kickoff the midband spectrum on air.

The 5G C-band networks of AT&T and Verizon which went online between the 3.7-3.98 GHz wavelength are capable of both traveling long distances and carrying enough data to deliver faster internet connections. On the other hand, with the proposed restrictions at selected airports, the aviation industry is preparing for some service disruption assumed to happen due to the proximity of the frequency band to be used for the new 5G mobile services and the radio altimeters used by aircrafts (4.2-4.4 GHz).

The federal aviation authority (FAA) and the White House are yet to finalize solutions that can safely mitigate as many schedule impacts as possible with the mid-band spectrum launch. In parallel to this, US-based airlines asked AT&T and Verizon to implement 5G C-band everywhere in the country except within the approximate 2 miles (3.2 km) of airport runways, particularly at high-traffic airports. Airline officials expressed concern about whether Boeing 777s will be able to land safely with the new 5G service.

As a result, a lot of airline operators had to halt flights bound to the US as a last-minute precaution. The debate of whether 5G C-band is actually a risk to the western country’s airspace continues and has no clear vision yet of settlement. What’s interesting is that as per the cellular telecommunications industry association (CTIA) shared data, nearly 40 countries aside from the US have managed to launch 5G in the C-band at similar frequencies without reporting any harmful interference with aviation equipment.

Hence, an important question arises: what has actually brought up the abrupt and alarming response from the recent 5G C-band spectrum launch in the US?

The C-band is known as the centerpiece of the 5G wireless policy and networks, particularly the 280 MHz of airwaves at 3.7-3.98 GHz band which resides in a sweet spot for 5G small-cell networks. This is the reason why years of planning by the wireless industry and consultations with airlines have been done leading to the success of the 5G C-band rollout.

Despite that, the fear of signal interference within radio altimeters has driven another delay for AT&T and Verizon’s 5G C-band full deployment which many seasoned observers think is an antic of the aviation industry to buy new altimeters to replace the old ones now operating in most of the fleet. In a commentary published at the center for strategic and international studies (CSIS), the FAA warning and consequent deployment delays were unnecessary, as early deployment of C-band spectrum for 5G is critical to the US global leadership in next-generation wireless 5G products and services. Moreover, delaying 5G could impact all kinds of economic activity and sectors such as smartphones, transportation, smart infrastructure, advanced manufacturing, and construction, among others.

In 2020, the radio technical commission for aeronautics (RTCA) published findings affirming that business aviation and rotorcraft are far more likely to experience radar interference due to 5G networks but whether or not the 5G C-band spectrum actually interferes with airplane safety equipment, the FAA doesn’t have actual proof to show yet. Thus, allowing 62% of the US commercial fleet of aircraft for flight near 5G C-band towers.

Furthermore, one of the reasons unfolded is that the US doesn’t have the safety standard that antennas be tilted forward to limit interference like in France. No official technical standards for altimeters are being followed as well, unlike the mobile industry’s compliance to technical 5G standards.

Dubai's Emirates, the world's largest international passenger carrier and the largest Boeing 777 operator, briefly suspended US destinations as president Sir Tim Clark described the situation as one of the most delinquent, utterly irresponsible in his aviation career. Clark was clear that Emirates was not aware that the power of the antennae in the US has been doubled compared to other countries.

UAE’s telecommunications and digital government regulatory authority (TDRA) has also clarified that the 5G C-band issue is exclusively related to the relevant US airports as there is no disruption or interference in the UAE between 5G networks and air navigation systems. 5G stations in the UAE have been installed in multiple places for many years, and TDRA based its 5G plans on studies that take into account the safety of frequencies and potential impact on other sectors. The authority also considers the decisions and procedures approved by ITU in this regard and is coordinating with the general civil aviation authority (GCAA) to ensure the highest levels of safety and security in this context.

In contrast, the UK civil aviation authority (CAA) says it has no reason to believe that 5G services using the C-band spectrum could interfere with sensitive aircraft equipment. Although it had acknowledged the FAA’s assessment, CAA did not believe there was any need to take any immediate action as there have been no reported incidents of aircraft systems being affected by 5G transmissions in the UK airspace. It is worthy to note that all four major UK operators have licenses for mid-range frequencies located between 3.4GHz and 4.2GHz.

Japan’s All Nippon Airways (ANA) and Japan Airlines have also announced flight suspensions to the US. As per NTT Review, a technical magazine produced by local telco NTT Docomo, relevant Japanese 5G allocations are 3.6-4.1GHz and 4.5-4.6GHz which are closer to the radio altimeter band than in the US, yet there hasn't been a backlash from Japanese airlines regarding 5G interference. Local scientists told the international civil aviation organization (ICAO) last year that to avoid the blocking of radio altimeters, the location of the high-power 5G base station should be avoided within 200m from the aircraft route.

While in the European Union, business is as usual because EU’s aviation safety agency (EASA) stated that “The technical data received from EU manufacturers offers no conclusive evidence for immediate safety concerns at this time.” The technical difference is that within EU countries, the 5G network is running between 3.4 and 3.8 GHz while the US frequencies are between 3.7 to 3.98 GHz, showing a considerable buffer in the EU than in the US.

Even in Australia, the Australian transport safety bureau (ATSB) has had no reports of radio altimeter incidents linked to 5G since its rollout two years ago as 5G transmission is currently top out at 3.7 GHz, well below the radio altimeter frequencies.