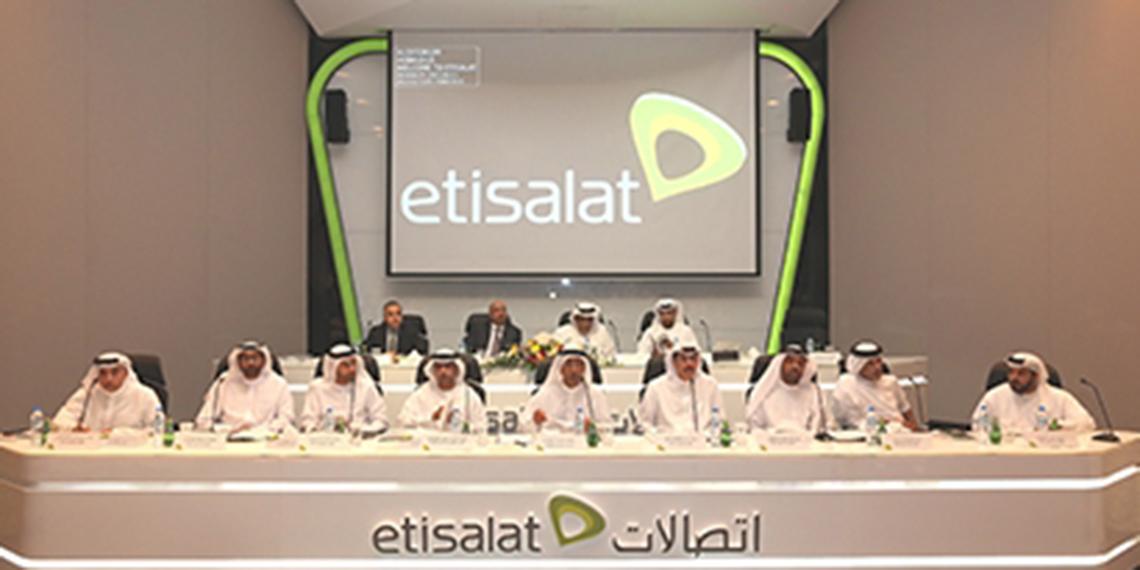 At Etisalat's annual general meeting, held at the company's headquarters in Abu Dhabi, shareholders have backed the board's recommendation to pay full-year 2015 dividends of 80s fils per share. After the release of the Group's 2015 annual results, the board proposed the dividend share, which is a reflection of the strong results achieved during the fiscal year ended on 31 December.

Etisalat Chairman, Eissa al-Suwaidi said: "2015 was indeed a historic year in the journey of Etisalat Group. Our expertise, experience and success in 2015 are a source of strength, making us more determined and resilient as we move on to a new chapter in the Etisalat Group story. I want to thank the wise Government of the UAE for their constant support, our customers for their loyalty and trust in us for delivering the latest technology and services, our shareholders for their continued support and the commitment of all Etisalat employees and the management team for their dedicated hard work and efforts in introducing the latest technologies to our customers."

Al-Suwaidi futher added: "The wise leadership of the UAE has played an important role in making 2015 a significant milestone in Etisalat Group's journey of growth. I want to laud the Government's historic decision to allow investors from local and foreign institutions, as well as non-local individuals, to own equity in Etisalat Group. This decision embodied a new phase in the journey of Etisalat Group, allowing it to realize its goals of more growth and prosperity, which will simultaneously have a positive impact on both shareholders and the financial market."

He added during the AGM: "In this respect, consolidated annual revenues reached AED 51.7 billion, while net profits, after the federal royalty, reached AED 8.3 billion. And in line with our strategy of finding added value for our shareholders, Etisalat Group Board has recommended the distribution of dividends to be of 80 fils per share for the year 2015.

"Embodying our strategic role in providing innovative solutions which transform the communities in which we work, Etisalat Group is heavily involved in the development of Smart Cities. Etisalat Group has been given great responsibility in this aspect and we look forward to implementing the next phase, helping to achieve the vision and ambitions of the UAE Government about Smart Government and digital transformation.

Last year also witnessed an important development in the field of network sharing. The Telecommunications Regulatory Authority formally introduced network sharing in the UAE. This will no doubt have a positive impact on the telecommunications sector in the country, providing an incentivized competitive environment, which will boost performance and innovation in the country, to the benefit of operators and subscribers, in equal measure."

Eng. Saleh Al Abdooli, Chief Executive Officer, commented: "As we prepare to enter our fifth decade as a company, Etisalat's performance in 2015 reflects our history of solid performance and innovation. The financial results seen in 2015 have consolidated our position as a leading operator in emerging markets. As a result, we are well-placed to meet the challenges of the fast-evolving telecommunication sector and move forward with confidence to provide greater value for our shareholders and meet the aspirations of the millions of our customers across our international footprint.

"Our results in 2015 continue our long-term pattern of success; a clear indication that we remain in a strong position. Group revenues grew by 7 per cent to reach AED 51.7 billion with Operating Profit before Federal Royalty rising by 14 percent. Despite the challenges the industry faced in 2015, we were still able to deliver strong profits of AED 8.3 billion and with a subscriber base of 167 million. The main source of revenue growth was the UAE, our most important market, which grew by 6 percent driven by a higher subscriber base and the strong performance of the mobile and fixed broadband segments. Performance of our international operations was muted by unfavorable movements in foreign exchange rates and currently make up 44 percent of Group consolidated revenues. Operating margins improved to 51 percent supported by the strong performance of UAE operations and higher contribution from Maroc Telecom Group."

He continued: "We allocated AED 4.9 billion - about 47 percent of consolidated capital expenditure - to the UAE market given our unwavering commitment to provide a state-of-the-art related telecommunications network to the citizens of the UAE, and reflecting the higher revenue per subscriber in the market. In international markets, we progressed with strategic investments that included; acquiring 4G license and launching of 4G+ services in Morocco Telecom, in addition to license acquisition and renewal in Ivory Coast, Niger and Mauritania."

"We are an enabler of this dynamic future," Al Abdooli continued, "but to be able to benefit from it we need to be at the forefront of progress today. Only by investing today can we deliver the future growth that will ensure our continued prosperity. One example of this approach, is delivering the objective we share with the UAE Government, to be one of the first countries in the world to have the fifth generation of mobile technology that is vital in delivering the Smart City solutions, which will shape the next stage of human development.

"At the heart of this digital revolution is the mobile phone. It is the constant in all our lives and will be the fundamental element of everything that we do. The smartphone will be your identity, your wallet, your access to services and entertainment; ubiquitous to individuals and business. In 2015 we expanded our Mobile Connect service, which helps customers to manage their Digital Identity and protect privacy on-line, across the majority of our operations. This year we launched Mobile Cashier in five markets within our footprint. It is a first-of-its-kind solution in the region, which enables business customers to manage transactions through their mobile phones, and is gradually transforming the SME sector and B2B capability."

He concluded: "We are well-placed to deliver the advanced and innovative solutions that will be the key to generating future growth and profitability. Only by adapting and investing today can meet what our consumers demand tomorrow and continue to deliver for our shareholders and customers in the next decade of our history and beyond."