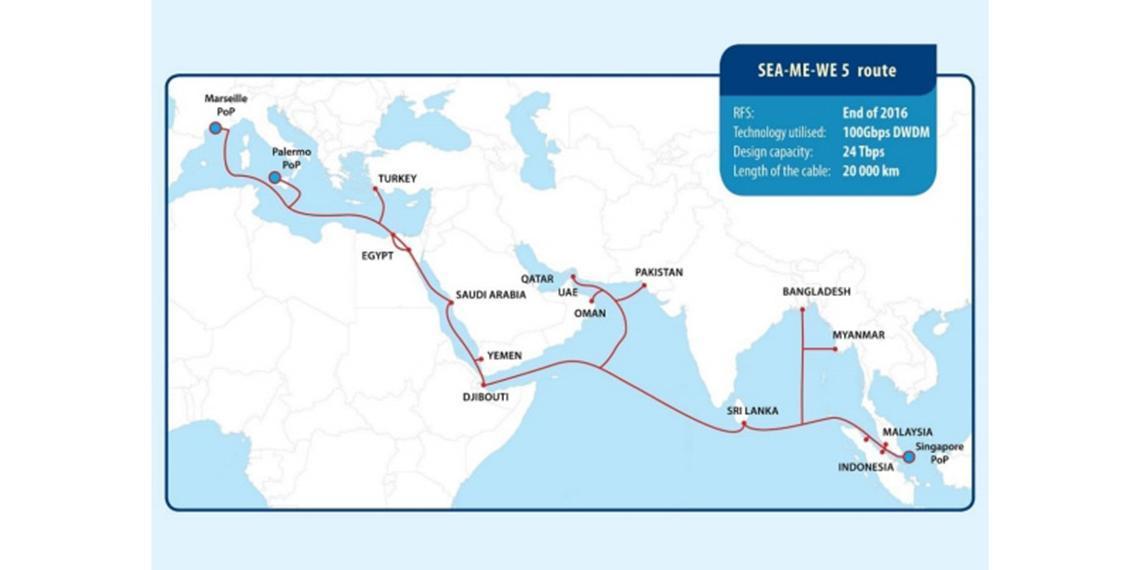 The SEA-ME-WE 5 Consortium recently announced the completion of the 20,000-kilometer subsea cable infrastructure developed by a 16-nation consortium on schedule. UAE telecom provider, du, is a stakeholder in the project which is in-line with the UAE National Vision 2021 and the National Agenda of sustainable environment and infrastructure. The UAE is an emerging business hub in the region and investments from du were instrumental in bringing SEA-ME-WE 5 to the UAE.

This submarine cable system won the Project of the Year – Subsea award at the Global Carrier Awards in Paris in November 2016 for its technological and managerial excellence.

""As a leading smart city enabler, du takes into serious consideration any opportunity to improve the ICT infrastructure in the UAE, not only to benefit its intrinsic business requirements, but also to benefit the UAE as a whole. Our investment in the SEA-ME-WE 5 consortium is a reflection of our commitment to maintain and strengthen our position as a trusted partner for our customers who demand the highest quality solutions when it comes to their ICT needs,"" said Farid Faraidooni, Chief Operations Officer.

The growth of mobile data and internet usage in the UAE is driving the demand for higher-capacity infrastructure. du chose to be a stakeholder in the project to help support its capacity demand in the domestic and regional markets. This is a consortium of some of the largest telecom operators in the world, allowing UAE enterprise customers access into those markets. du's investment in SEA-ME-WE 5 will enhance the resilience of its network and ultimately support both customer and community satisfaction.

The SME-ME-WE 5 subsea cable system, spanning 16 countries from Southeast Asia through the Middle East to Western Europe, is a technological breakthrough which marks a global communications milestone. It is designed with a capacity of 24 Terabits per second on 3-fiber pairs, fully capable of accommodating the future demand of data from other bandwidth-intensive applications such as enterprise data exchange, internet TV and online gaming.

The SEA-ME-WE 5 submarine cable's advanced 100Gbps technology is expected to meet the quadrupling of bandwidth demand between Europe and Asia. In contrast with other submarine cable systems, the SEA- ME-WE 5's main endpoints are carrier-neutral/open Points-of-Presence (PoPs) and not just Cable Landing Stations (CLS).

The subsea cable system, which was implemented with over $500 million from consortium members, was designed to enable the latest upgradable 100Gbps technology, further enhancing the diversity and resilience of the heavily-utilized route between Asia and Europe.